Through the years: Perseverance has fueled Red Flash football program 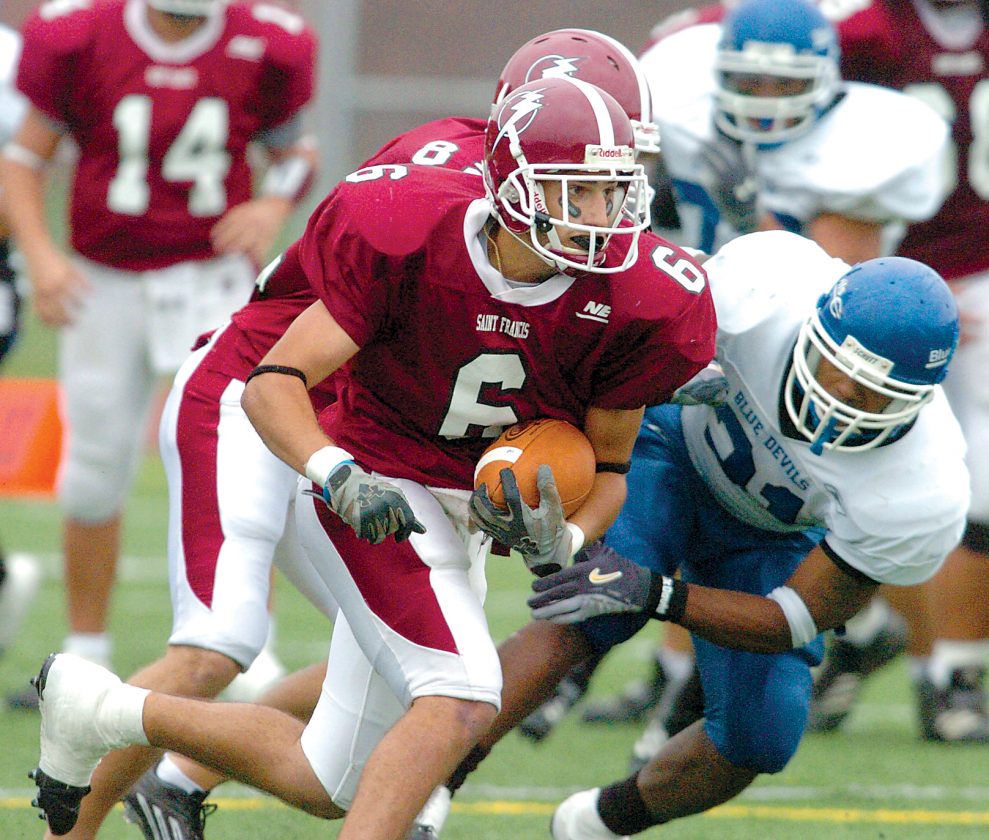 Courtesy photo Michael Caputo starred for the Red Flash from 2003-06 and is the Saint Francis and NEC career leader in receptions with 245.

LORETTO — As the Saint Francis football team prepares for its 50th anniversary of modern football this weekend with a game against Columbia today, it is only appropriate to appreciate the roads taken to the celebration date.

Saint Francis football has travelled many hills and valleys since its first inception in 1892.

The program has been born, stalled, discontinued, reborn, ravaged by war, wounded, and, starting in 1969, resurrected for perpetuity.

Fifth years ago, a band of intrepid students started club football at Saint Francis. Little did those pioneers know (or perhaps they did) that their starting efforts would lead 50 years later to a burgeoning FCS program that has won conference titles and sent players to NFL gridirons.

Saint Francis football reportedly began in 1892, but early records were tragically destroyed in a blaze that tore through the College of the Pines.

The first year of certain records saw Saint Francis lose 15-0 to Gallitzin. In those early days of college football, colleges regularly played town teams and high school squads. The not yet named Red Flash bounced back with a 7-0 triumph over Hastings.

How the 1913 squad followed up on the successful season is a mystery; results are currently missing. There was no team in 1916, but Savage returned in 1917 to post the only unblemished record in SFU history. His guidance led to a 6-0 campaign.

In an ominous foreshadowing, war broke up SFU momentum as the trenches of 1918 ensured no red jerseys flashing across gridirons but only doughboys on the scarred fields of France. Savage returned in 1919, but his magic was empty as the team slipped to 3-4; he did beat the strangest opponent in SFU history: a 2-0 victory over the Altoona Quakers.

After two seasons without football, the program was ostensibly restarted under the direction of John “Speedy” Loughran. Alas, the only aspect speedy about Loughran’s tenure was the pace in which opponents scored. Six times, opponents scored over 40 points on his defense while the offense only recorded nine points in two years.

Fortunes rebounded starting in 1925 as the red and white (soon to dubbed the Red Flash in 1927 in a game against Westminister) recorded five straight winning seasons. Unfortunately, the Great Depression put a temporary suspension on the program, and from 1932-37 no Red Flash streaked across the fields.

However, salvation soon rang from the echoes of the iconic bell tower for the college followed the patterns of fellow Catholic schools and hired a Notre Dame to bring some of the Fighting Irish magic to their teams.

James “Big Jim” Leonard arrived from South Bend to reawaken the slumbering program. Early returns were not promising with records of 1-6 in 1938 and 0-7-1 in 1939, but Leonard was building a nucleus and 1940 witnessed a 6-2 squad that ended the season on a six-game winning streak.

The streak continued into 1941 with a 6-0-1 mark. Only a 7-7 tie with Saint Vincent prevented a blemish free season.

Saint Francis football was young, hungry, ambitious, confident and ready to take the next step but less than a month after a 59-6 drubbing of Arkansas A&M, the football team would use their winning ways on a more important battlefield for Pearl Harbor was bombed.

For the second time, war interfered with Saint Francis football.

Following the march of several other colleges, football was temporarily shelved as players earned All-American honors on the battlefield. The Red Flash went on hiatus from 1942-46.

Some players like sophomore star halfback Ed Stofko never returned to a SFU jersey. Stofko, the star halfback and passer for the ’40-41 teams, enlisted in Uncle Sam’s team, served in the war, was drafted by the Steelers, and played in several games for the franchise before, like so many Saint Francis graduates, becoming a pillar of his local community.

Leonard stayed loyal to Saint Francis and reignited the program in 1947, going 4-1 extending the unbeaten streak to 17 games (a program record) before a 13-6 loss to Steubenville. The program received a double whammy when Leonard departed for other coaching opportunities.

I.V. Davis tried his best to keep the program going, but after a 21-0 loss to Kings to complete the 1953 season, the team was suspended. As at many post-WWII Catholic schools, financial deficits were cited as the reason for disbandment.

From 1954-68, no gridiron warriors haunted the fields of Loretto. But as mentioned earlier, in 1969, some hungry football players started club football. The father of SFU football, Art Martynuska, was hired as head coach, and they were off.

The first season didn’t witness immediate biggest success (1-5) but a 16-14 win over Niagara heralded the first SFU win in 16 years. Martynuska quickly built a club powerhouse. In 1971, the team went 7-1 and earned the No. 1 club national ranking. Another 7-1 season followed in 1974.

In the late 1970s, football officially became NCAA sanctioned at the Division III level and there was a sense that the program was permanent.

The 1992 season witnessed the most successful year since 1974 as SFC (Saint Francis became a university in the early 2000s) went 8-2-1, won the ECAC regular season title, and Kevin Magee claimed ECAC player of the year honors.

Despite several sensational individual honors, team success eluded the Red Flash until the hiring of current head coach Chris Villarrial in 2010. In 2015, after posting a string of 5-6 seasons, the Red Flash broke through for their first winning season since 1992 by going 7-4 and achieving the first winning record in NEC play (4-2) in school history.

Greater success followed in 2016: a 7-5 overall record and 5-1 mark in NEC competition meant the first ever NEC title and berth in the FCS playoffs. The Red Flash battled Villanova to a 31-21 defeat. In 2017, the Red Flash defeated top 25 opponent Liberty, a week after the Flames took down FBS member Baylor.

As the team enters the 50th anniversary game today against Ivy League foe Columbia (1 p.m. kickoff at DeGol Field) with a 2-1 record, past and future meet in a joyful reunion. The program is in healthy condition with confidence, backing and coaching.

Star defensive back and return specialist Lorenzo Jerome suited up for the 49ers in 2017. Recent graduate Jermaine Ponder played with the Texans in the past preseason. A steady stream of Red Flash have been invited to NFL training camps.

Only the most cynical contrarian would argue the next 50 years won’t be the most fruitful in Red Flash history. And it all started because in 1892 and 1969 some students just wanted to play football.

CONFLUENCE — Northern Bedford could not keep up with Turkeyfoot Valley in the second half, which rode the ...

COMMODORE — Coach Amy Hileman likes to reopen the figurative scrapbook of her youth and remind the young ...

Lady ’Cats use ‘D’ to get to next round

MIFFLINTOWN — With a spot in the District 6 Class 4A tournament and a state berth on the line, the Huntingdon ...