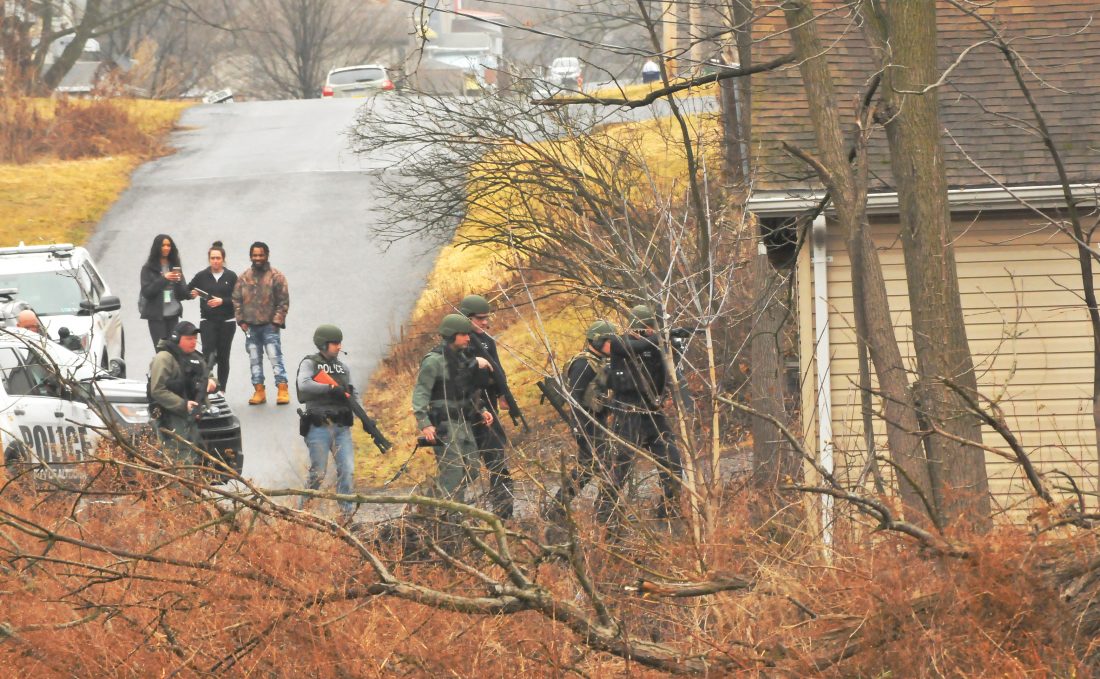 Mirror photo by Greg Bock / Altoona police move in to execute a search warrant at a home on the 100 block of Pleasant Valley Boulevard on Wednesday morning as part of the investigation into the Tuesday night shooting death of 15-year-old Devon Pfirsching.

Three juveniles face homicide charges in the killing of a 15-year-old Altoona boy.

Devon Pfirsching, 15, was shot in the head at point-blank range just before midnight Tuesday, and after an extensive all-night and all-day investigation, Altoona police said late Wednesday that three juveniles are in custody and will be arraigned today on charges that include homicide.

Altoona police Sgt. Matthew Plummer said all three are being charged as adults and their names would be released today when the charges were completed.

Pfirsching was shot when he arrived in the alley between Overflow Church and Jefferson Park on the 100 block of Fourth Avenue, police said Tuesday.

Plummer said detectives and police began talking with residents in the neighborhood after Pfirsching was found dead by responding officers. There were initial reports of what appeared to be three juveniles running from the scene. 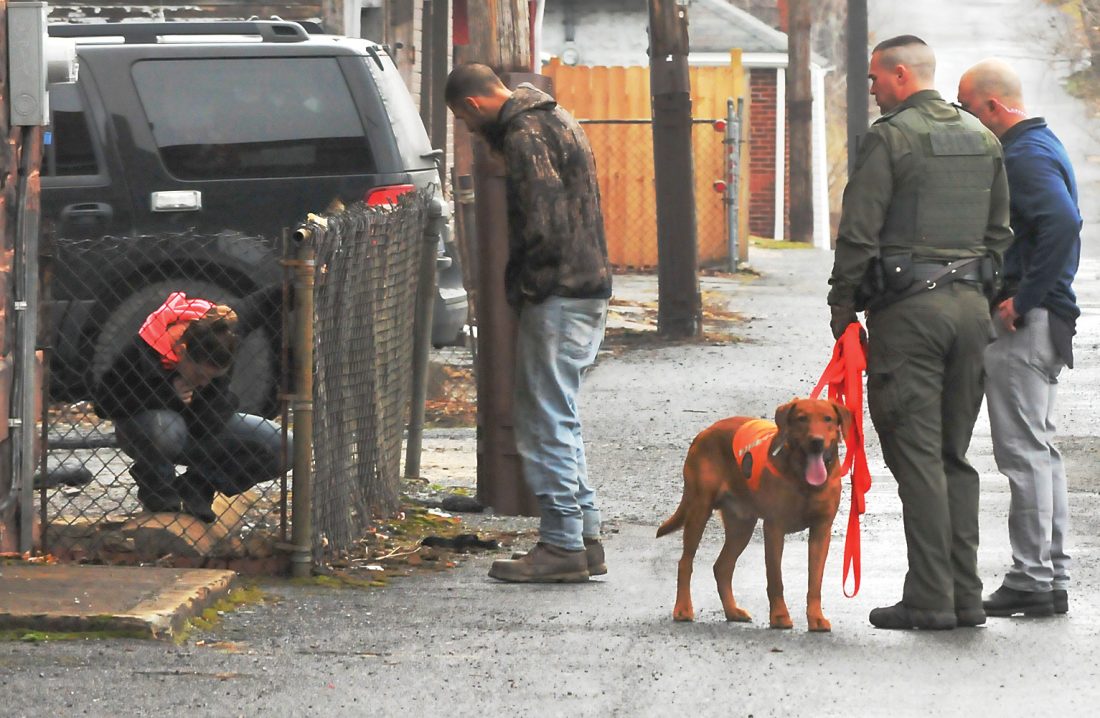 Mirror photo by Greg Bock / A Pennsylvania Game Commission dog trained to sniff out gunpowder and firearms was called in Wednesday to assist Altoona police as they looked for evidence in Tuesday night’s fatal shooting.

“Two ran in one direction, and one is reported to have run in a separate direction,” Plummer said Wednesday afternoon outside the Altoona Police Department. At least six juveniles were inside talking with investigators, he said.

Plummer said as the day unfolded Wednesday, investigators learned Pfirsching was not alone and was driven to the scene by other teens.

When police spoke with Pfirsching’s companions, they were told that after they drove Pfirsching to the scene, heard a loud bang, got scared and fled.

“However, they returned to check on their friend and found him deceased,” Plummer said.

Throughout Wednesday morning, Altoona police combed the East End neighborhoods around the alley in search of evidence, specifically the gun and shell casings. A Pennsylvania Game Commission dog that is trained to sniff out gunpowder was brought in to assist. Plummer said the dog led police to possible evidence, but he declined to say what was found apart from that it was not the gun used in the killing.

As the dog and its handlers paced the area around the crime scene, across town on the 100 block of Caroline Avenue, Altoona police in tactical gear prepared to move in through the back door of a house situated on Pleasant Valley Boulevard to serve a search warrant. When police emerged, a juvenile boy arrived on foot, and after handing his backpack to a detective, he climbed into the back of an Altoona police SUV along with several adults and was taken downtown.

About 4 p.m., police prepared to execute another search warrant at an undisclosed address. Plummer said at that time that no gun was found in the first search. It was not known what police recovered in the second search, which Plummer confirmed was also of a home.

On Wednesday morning, police put out an appeal for people to come forward if they had information about Pfirsching’s killing, and by mid-afternoon, a half-dozen teens were talking with police, Plummer said.

“A lot of parents came forward whose children were either witnesses or associated with the crime scene somehow,” Plummer said.

Pfirsching was a sophomore at Altoona Area High School, where on Wednesday counselors were available throughout the day for students and staff, Altoona Area School District spokesman Paula Foreman said.

“We have a multi-disciplinary team that we put into action,” she said. “We have crisis counselors from UPMC Altoona, and we have our own counseling staff and administrators. We will continue with that for as long as it’s needed.”

A Gofundme.com account was set up to help with Pfirsching’s funeral expenses and other costs. It’s initial goal of $10,000 was exceeded and in just six hours the total had climbed to close to $20,000.