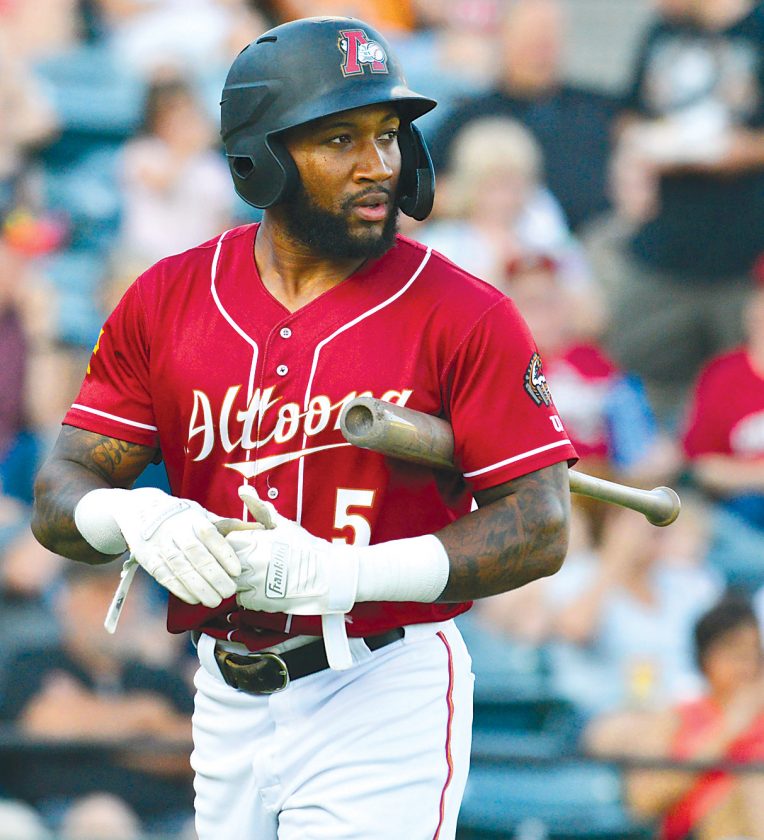 06/28/19 Mirror photo by Patrick Waksmunski / Curve's Bralin Jackson look at the scoreboard after striking out swinging for the 3rd out in the 3rd inning.

Just when it appeared the Curve were in great position to take the lead and potentially win the game Friday night, a quick and poor sequence of events wound up costing the club.

Former Curve standout Barrett Barnes homered for the second straight night to help Binghamton to a 7-5 win over Altoona before 6,861 fans at Peoples Natural Gas Field.

Barnes’ two-run blast gave the Rumble Ponies a 5-4 lead in the top of the eighth. The Curve then tied it in their half of the inning and had runners at first and second with no outs looking to pull ahead.

First, Bralin Jackson twice failed to get down a sacrifice bunt, fouling it off each time.

“Gotta get the bunt down there,” Curve manager Michael Ryan said.

Prior to the third pitch to Jackson, Brett Pope, who had doubled home the tying run, took off trying to steal third base. He left too early, though, pitcher Eric Hanhold (1-0) threw to second and Pope got out in a rundown.

Just like that, the Curve’s golden opportunity to take the lead vanished in the blink of an eye, and the team never recovered.

“You have to execute in order to have success, and we didn’t execute,” Ryan said. “We didn’t get the bunt down. That’s what it boils down to. Can’t give games away.”

Ryan explained what Pope was thinking trying to steal third in that situation, while also pointing out it wasn’t a good idea.

“Pope said that he saw offspeed grip and decided that he was going to take a chance and try to steal that base,” the manager said. “We have explained the situation to him after what happened, and I think now he understands that it’s probably not the best time to run.”

Jared Oliva struck out with the go-ahead run on second to end the eighth inning. Binghamton then scored two runs off reliever Angel German (2-2) in the ninth to win. Quinn Brodey doubled home the go-ahead run, and Will Toffey later hit a solo homer.

Barnes hit a solo homer Thursday and a two-run shot Friday for the Rumble Ponies. The 2012 first-round draft pick of the Pirates last played for the Curve in 2016, when he enjoyed a banner year, hitting .306 with nine homers, 47 RBIs and an .853 OPS in 124 games.

Barnes was always a solid player in the Pirates’ minor league system, but he battled numerous injuries over the years that cost him development time.

“Such a great player, I think his career’s a little bit different if he had stayed healthy,” said Ryan, who managed Barnes at low-A West Virginia.

“He just had the problems with the hamstring. But I’m glad that he’s doing well right now. I love Barrett and think he’s a great person and great player, and he gave his heart out for us here. You root for people like that.”

Barnes keeps a positive approach, saying his love for the game drives him every day.

“It’s just the path,” he said of his injury issues. “Like I said years ago, big family of faith and belief. My mom’s a pastor. Everyone’s path is going to be different. This is the path I’m on, and I’m just going to try to stay on it as much as I can, stay straight and narrow, and wherever the good Lord takes me I’ll accept it.”

Barnes was in good position with the Pirates following the 2016 season, but injuries bit him again the following season at Triple-A Indianapolis.

“I talked to the front office that offseason (in 2016),” Barnes recalled. “They had one spot on the 40-man, and (Clay Holmes) got it. They told me I was going to go to camp, have a chance to break (with the big league club). I go to Triple-A and still have a chance, and I pull my hamstring three times. So there’s nothing else I could really do about that.”

The Mets just called up a 29-year-old making his first appearance in the big leagues in pitcher Chris Mazza, so that sort of thing serves as motivation for Barnes.

“I still feel like I can play at the major league level,” he said. “We just had a guy go up yesterday who’s (29) years old for the first time. So it’s not a thing over here about prospects and favorites and everything like that. They’ve been struggling, so they need pieces, and it’s just about showing up on time and being available.”

Key play: The Curve failed to break up a tie game after getting runners to first and second with no outs in the eighth.

Key stat: Former Curve OF Barrett Barnes has homered in each of the past two games against his former team.

LEADING OFF: The Curve will be featured on “SportsCenter” once again this morning, with the show handing out the minor league promotion of the week nod to the franchise for its season-long Allegheny Yinzers concept. The Curve will wear Yinzers jerseys in game two of tonight’s doubleheader.

SAFE AT FIRST: The Curve’s “Ghostbusters” jerseys earned them a “SportsCenter” appearance on May 18 for the top minor league promotion that week. ESPN anchors wore the “Ghostbusters” jerseys that day and are expected to wear the Yinzers jerseys today. There’s no official count of how many times the Curve have appeared on “SportsCenter” in their 21 seasons, but this will mark two times in a month a half.

STEALING SECOND: Former Curve 1B Will Craig has been selected to play in the MLB All-Star Futures Game on July 7 at Cleveland. Craig is now with Triple-A Indianapolis, hitting .258 with 16 homers and 45 RBIs.

ROUNDING THIRD: The Curve and Binghamton will play a doubleheader today beginning at 4:30 p.m.

HEADING HOME: Following this weekend homestand, the Curve will play three games at Akron and return home on the Fourth of July.