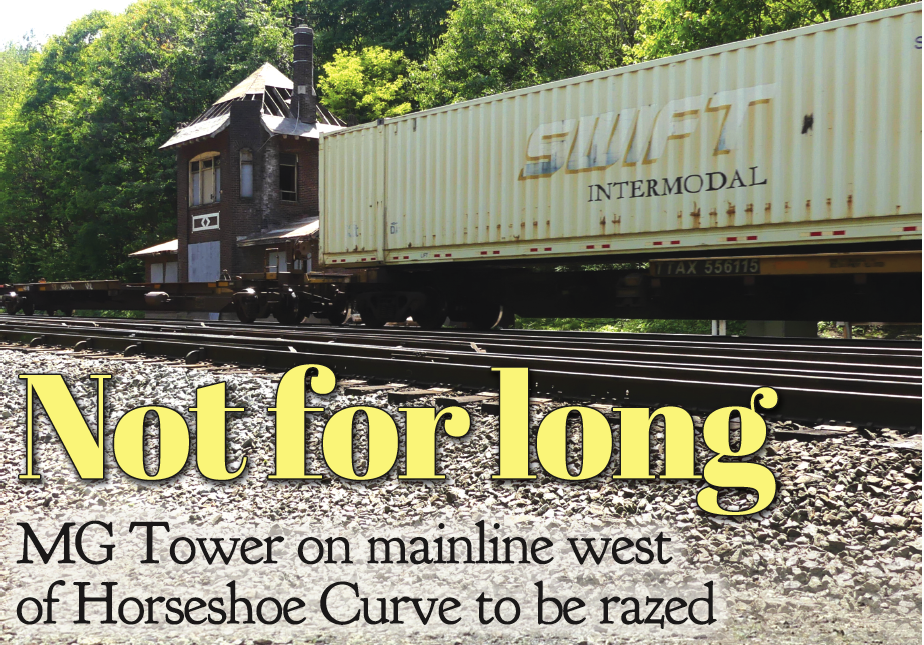 Some artifacts of the past are preserved through lots of effort and special funding, holding places of honor in their communities, which call attention to them, like Altoona does to the former Pennsylvania Railroad master mechanics building that houses the Railroaders Memorial Museum.

Other relics survive accidentally, escaping annihilation without being noticed much, so the when we spy them, we nod in satisfaction that the prevailing powers haven’t taken them yet, as when we see the flash of a barely legible “PRR” on a rusting gondola while driving past a train yard.

The MG, for “Middle Grade,” Switch Tower along the mainline tracks about 2 miles west of the Horseshoe Curve is that kind of relic — but it’s destined to soon be gone.

“We have put the demolition out to bid and are awaiting responses,” Norfolk Southern spokesman Jeff DeGraff said in an email, after the Mirror was alerted to a post on a rail-themed Facebook page. “Depending on the costs submitted, we will evaluate how we move forward.”

The decision to demolish “is based on safety concerns of having and needing to secure unused and deteriorating buildings,” DeGraff wrote.

The company hasn’t received any comments or feedback on the demolition proposal, he added.

Local railroad aficionados, however, have thoughts about the impending demolition.

But it’s hardly surprising, as switch towers are “dinosaurs of the railroad industry,” said Dave Seidel, founding member of the Horseshoe Curve Chapter of the National Railway Historical Society.

The tower isn’t a feasible candidate for preservation because of its inaccessibility, a long way from a public road, according to DeFrancesco.

“It’s not a tourist attraction by any means,” Seidel said.

Moving the building would be difficult and expensive, DeFrancesco said.

The railroad could let the tower stand, with no need for maintenance, except “maybe to keep a roof on it,” Seidel said, when asked why the company couldn’t just refrain from demolition.

“But my opinion is based on nostalgia,” Seidel said. “(That) has no place in the (company’s) bottom line.”

It’s on NS property, and “it’s their right to do with it what they wish,” DeFrancesco said.

The tower is a “unique piece of industrial architecture,” soon to be another of the lost “remnants of the PRR’s massive imprint,” Frederick said.

Those losses began with the PRR’s merger with the New York Central Railroad to create the Penn Central in 1968, according to Seidel, who worked as a clerk, then in the classification yards of the PRR, beginning in 1965 and ending in 1968, following the merger.

“I’ll never forget standing on the bridge at 17th Street (in Juniata, a bridge that has since been demolished) and watching them cave the roof in at the East Altoona roundhouse,” Seidel said. Down below were store rooms with oaken file cabinets full of blueprints from the steam era that would be “invaluable today for historians,” Seidel said.

Former railroad museum board member Al DiCenso has seen MG Tower “a hundred times,” having ridden on the mainline in locomotives because of a contact he had with the railroad long ago. “It’s not your typical PRR interlocking tower,” DiCenso said.

In contrast to the slightly ornate MG Tower, the usual towers were of “rather spare” design, DiCenso said.

“I’m disappointed,” he said of the plans to raze. “But I don’t see any practical means of saving it.”

“You preserve what you can preserve,” DeFrancesco said. “Some things are beyond reach.”