‘I did not kill my babies’ 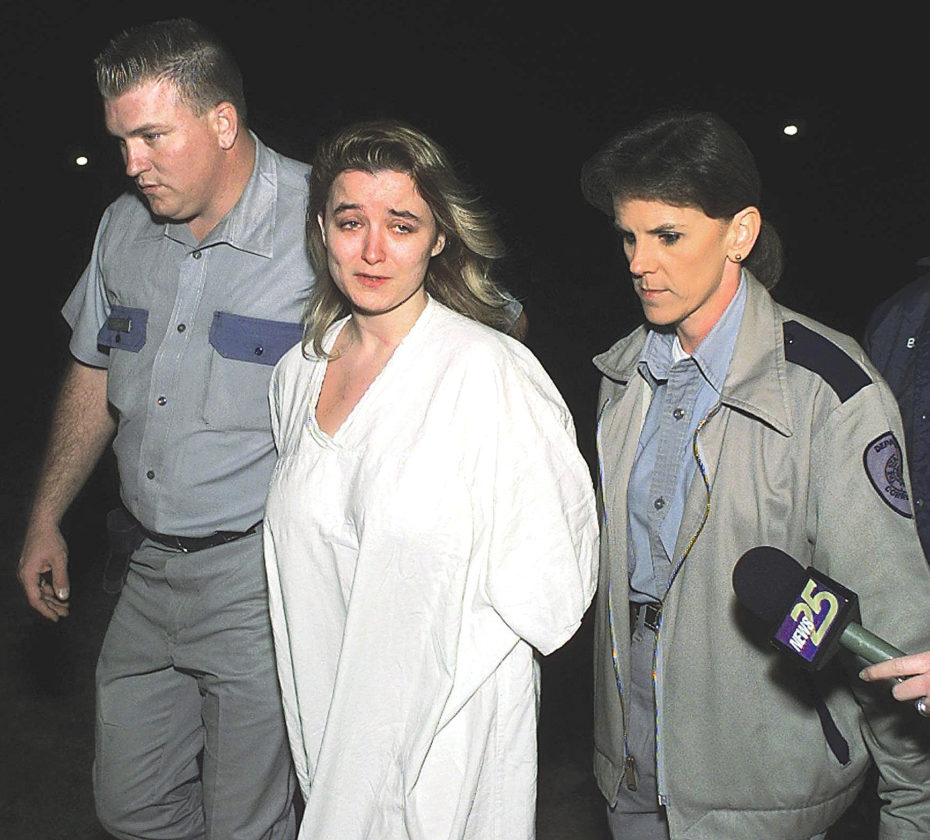 Associated Press file photo / Darlie Routier is escorted by Chris Cassell (left) and Maryanne Cox to the Mountain View Unit of the Texas Department of Criminal Justice in Gatesville, Texas, on Feb. 5, 1997. Routier was sentenced to death for the fatal stabbing of her 5-year-old son, Damon, in their Rowlett, Texas, home on July 6, 1996.

When Altoona native Darlie Lynn Routier was convicted by a Texas jury in February 1997 of stabbing to death her young son, Damon, 5, and by implication, her other son, Devon, 6, she reportedly cried out, “I did not kill my babies.”

Both boys were murdered on June 6, 1996, as they were sleeping with their mother in the downstairs television room of the family’s Rowlett, Texas, home, while her husband, Darin, was in an upstairs bedroom with their 18-month-old son Drake.

Routier, then in her 20s, also suffered grievous injuries that night, including a badly bruised arm and stab wounds to her neck, which came within 2 millimeters of slicing a carotid artery, an injury that could have killed her within minutes.

She said she fought an intruder and after he allegedly fled through a cut screen in the home’s utility room, she and Darin, who was awakened by the noise and came downstairs, took steps to quell the bleeding of their two children, and call 911.

When EMTs and police arrived, the older boy was dead on the floor while Damon was alive. He died on the way to Baylor Hospital in Dallas.

Darlie Routier described the intruder as a man with long hair, wearing a baseball hat, a dark T-shirt and jeans.

On the scene that night was a veteran but retired Rowlett police officer, James Cron who, after only 25-30 minutes, was convinced there was no intruder and that the murders were an inside job. He concluded Darlie Routier had staged the scene, including her own injuries.

The family room was a mess, with blood on the floors and furniture, and broken glass from wine glasses and other evidence scattered about.

When Cron was asked at trial why he debunked the story of the intruder, he answered, “It’s sort of a big picture. It’s not any one thing. It was the overall scene which, primarily, is the lack of evidence in many cases. But the entire scene indicated to me there had not been an intruder.”

Within days, Routier was charged only with Damon’s death and the case went to trial within seven months.

Two days later, on Feb. 3, 1997, the jury recommended that Routier be put to death, and since that time, she has remained on death row in a state where the death penalty is often carried to conclusion for both men and women.

For the past 22 years, Routier has maintained she didn’t commit the murders.

She and her mother, Darlie Kee, formerly of Altoona, have proclaimed Routier’s innocence through newspapers, books and several TV documentaries.

Aided by a team of lawyers at her side, the mother-daughter pair have challenged the verdict in both the state and federal courts.

Despite the passage of time, the Routier case continues to gain national attention and will be the premiere case in a new series called “The Last Defense,” which will air on ABC Television Network beginning at 10 p.m. Tuesday.

The seven-week docu-series explores the flaws in the American justice system through the Routier case and that of another death row inmate, Julius Jones, who was convicted of a car-jacking murder in Oklahoma.

Jones, too, maintains his innocence.

Actress Viola Davis is the executive producer with Julius Tennon.

The murders of Damon and Devon occurred 22 years ago this past week, but Routier’s mother, Kee, still has hope that she will one day see her daughter a free woman.

“The upcoming four-part series (devoted to the Routier case) will expose the mistakes and how, now, she (Darlie) is still 100 percent innocent,” Kee stated when contacted this week.

Attorney Richard A. Smith of Dallas, who has been involved in the defense since 2002, said he is looking forward to the docu-series. He said he was interviewed for it.

He said he believes Darin, although divorced from Darlie, still supports her claim of innocence, and he reported that Drake, the 18-month old in the upstairs bedroom that night, is now an adult who was treated for leukemia. The disease is now in remission, he said.

While the investigation quickly led to an arrest, much of the story of the Routier case lies with what has happened since.

According to the defense lawyers in their federal filing, Routier did not have proper legal representation, and the defense did not counter scientific evidence that allegedly linked Routier to the crime, due to a her lawyer’s conflict of interest.

In addition, the prosecution used “character assassination” to turn the jury against Routier, the prosecutor’s opening statement said, contending: “The real Darlie Routier is, in fact, a self-centered woman, a materialistic woman, and a woman cold enough, in fact, to murder her own two children.”

The prosecution presented a friend who stated Routier had a temper, and had become materialistic over the years as her husband’s computer business allowed the couple to live in an expensive home and purchase a boat and a Jaguar.

The couple’s extensive buying coupled with a business downtown led to money troubles the Routiers were experiencing at the time of the killings.

The prosecution presented the jury with video of Darlie shooting silly string and laughing during a graveside celebration of Devon’s seventh birthday just prior to her arrest.

What the jury never found out was that a sister organized the graveside party and brought the silly string, and that there was an ensuing prayer service followed by a quiet family gathering, the defense claims.

She was criticized for going to a woman’s night out at a Dallas nightclub on Mother’s Day eve.

A doctor and two nurses who treated Routier while in the Baylor Hospital were allowed to testify that Routier did not act typically for a woman who had just lost two children.

The doctor said she did not become hysterical but had a “flat effect.”

A nurse supervisor said she was withdrawn and didn’t cry very often and told the jury this was “not the emotions that you usually see with a mother.”

A nurse testified that Routier did not display the emotions she had witnessed in people who had lost loved ones or close relatives.

This impermissible character evidence and “expert testimony” from the medical personnel “so infected Ms. Routier’s trial as to undermine the confidence in the verdict,” her lawyers stated.

In the beginning, Routier was represented by attorneys Douglas Parks and Wayne Huff, who retained two forensic scientists and who were prepared to counter prosecution theories about how the blood spatter, broken wine glasses, a bread knife found at the scene and an overturned sweeper rebutted Routier’s story that an intruder had murdered the children.

The forensic scientists, Terry Labor and Barton Epstein, disagreed that blood on the back of Routier’s nightgown came from the knife spatter as she allegedly raised and lowered her arm while stabbing the children.

They noted only “minimal areas of spatter” on the nightgown — which had never been tested.

However, the two court-appointed attorneys were eventually replaced by attorney Douglas Mulder and several others, who, according to the federal appeal, did not use the forensic scientists to counter the scientific evidence presented by the prosecution.

Mulder, it is contended, also agreed not to attempt to implicate Darin as a suspect in the murders of the two children. The present defense team pointed out that Mulder had represented Darin in the past and thus was conflicted in his representation of Darlie.

Another issue the defense raises is the fact that the court reporter for the case had personal problems during the trial and that an investigation found 30,000 errors in the transcripts that had to be corrected.

The defense in its quest to overturn Routier’s verdict summed up its case in its federal petition, stating that the jury that convicted Darlie for Damon’s murder “never heard substantial evidence that undermines the state’s circumstantial case against her and supports her claim of innocence.

“And the jury never heard a key alternate explanation for the crimes because Mulder had agreed as a condition of retention by Darlie’s counsel to protect a more plausible suspect, her husband, at the expense of Darlie’s own defense.

The defense wants the verdict overturned “because no court can have confidence in such a fundamentally tainted verdict,” it concluded.

Appeal moving slowly through the courts

Over the years, Routier’s challenges in the courts have moved glacially slow, awaiting the outcome of DNA tests on the blood evidence from the rugs, Routier’s nightgown, on a pair of socks found 70 yards away in the neighborhood, and several mysterious, unidentified fingerprints.

Routier’s federal challenge filed in the U.S. District Court for West Texas in San Antonio begins, “Darlie Lynn Routier sits on Texas death row for a crime she did not commit.”

That filing has been on hold for more than a decade, pending the outcome of her state post-conviction challenge.

The federal court requires that a status update on the DNA testing be submitted every six months.

The status report submitted just a year ago, on June 19, 2017, made it clear the Routier case falls low on the state’s priority list. It read:

“In May 2017, counsel in the Dallas County District Attorney (office) learned the materials that were supposed to have been transported to the Department of Public Safety for DNA testing, as the state trial court’s testing order had required, had never been transported to DPS.”

That error has since been rectified, and according to defense attorney Smith, the DNA testing is in its last stage.

He said he didn’t want to discuss results so far but said the testing is important in the overall picture and will enable the defense to determine its strategy during the pending state court hearings.

What: “The Last Defense”