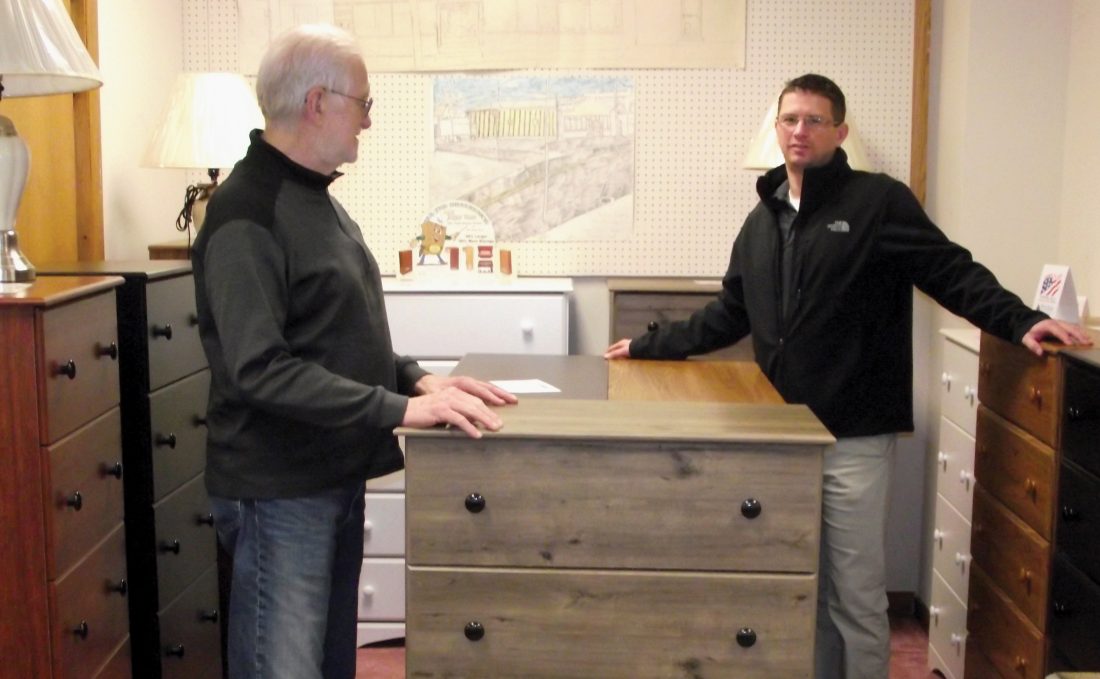 Mirror photo by Walt Frank / Ed Miller (left) and his son, Ryan, check out some of the furniture they have for sale at McMullen Furniture in Juniata.

It’s “all in the family” for McMullen Furniture.

The family-owned-and-operated business, now at 602 N. Second St. in Juniata, is marking 75 years in business in 2020.

The business was started in Saxton in 1945 by John “Harry” McMullen and his mother Mary, said president and owner Ed Miller, Harry’s nephew.

Harry had been delivering groceries for a local store and one of his stops was at the home of Anne Wolf of the Wolf Furniture Co. family.

“Harry had a nice personality. She said he should work for the boys (Wolf’s). He then got a job with Wolf Furniture. He became manager of the basement department of the store downtown. He did well and they asked him to manage Wolf’s Tyrone store. He did well and they asked Harry to go to Huntingdon. After a number of years he thought ‘I can do this myself,'” Ed Miller said. “He said Wolf’s was a great learning process for managing stores. He decided to start his own store, there were a lot of little stores started by people who had worked for Wolf’s.”

Harry and Mary ran this store together until Harry’s brothers, Russ and Mike, returned from World War II.

Russ took over the Saxton store and Mike operated a store opened in Mount Union. Those stores closed in the 1970s.

Harry came to Altoona in the 1950s with the original location on Fourth Avenue between Seventh and Eighth streets.

The store moved to its present location, a former Acme Market, in 1959.

Ed Miller — who will be inducted into the Blair County Sports Hall of Fame in May for his outstanding basketball career — started working at the store while he was in high school.

“I got into the business when Uncle Harry asked me to work for him, I have been here ever since — it’s the only job I ever had,” Ed Miller said.

A devastating fire destroyed the building on April 30, 1978, and although the building was a loss, Harry and Ed’s dedication to their customers drove them to open for business the next day in the store warehouse.

It is believed the fire started at the nearby Admiral Cafe and spread.

“Harry decided to immediately rebuild — there was no question,” Ed Miller said. “We rebuilt and were in the new building by October.”

A couple of factors enabled the business to keep going at the time.

“We were able to continue because people were making payments to the store. We still had money coming in, our records were kept at a separate place. That is what kept us in business,” Ed Miller said.

The business hasn’t changed much over the years but stopped selling appliances in the early 1990s.

“We do about the same. We treat people right and give them as much service as we can. We call ourselves a friendly store. We sell good quality furniture. We got rid of appliances — they were a headache. We needed to have someone else service them, if we sold it, we wanted to service it,” Ed Miller said. “Today we feature living room furniture, bedroom suites, dinette sets … we sell a lot of a mattresses and box springs, two sided mattresses. We sell a lot of bedding.”

McMullen Furniture continues to provide financing for its customers.

“We are one of the few. We give you a good interest rate, we finance ourselves, if times are slow we still have money coming in. We like to do it ourselves,” Ed Miller said.

Providing quality service has always been important to McMullens.

“We treat people right and sell quality products. Most of our business comes from customers who tell other people about us — word of mouth. We are a mom-and-pop store in the furniture industry, many like us have gone out of service. We are still here today, doing our thing. It comes down to treating people right. We are not perfect but we try to be. We call ourselves a friendly store,” Ed Miller said.

The biggest challenge is finding quality help for the business that employs five full- and part-time people.

Ed Miller, 74, said his son Ryan, who joined the business full-time in 2000 and serves as store manager, eventually will take over the business.

Both Millers are optimistic about the future.

“The past couple of years have been good for us. We are doing our thing. I have no plans to retire. I don’t want to quit working,” Ed Miller said.

“More customers are buying local. I see more people shopping local these days. They don’t want to go to the big box stores. It looks like it is coming around full circle,” Ryan Miller said.

The Millers are pleased to see the family business reach 75 years.

“It is significant. There used to be so many stores and there are only a few mom-and-pop stores left, a lot of them tried to get bigger and then went out of business. We are a survivor,” Ed Miller said.

The COVID-19 pandemic has interrupted the lives of nearly everyone in the region. Empty shelves and purchases ...