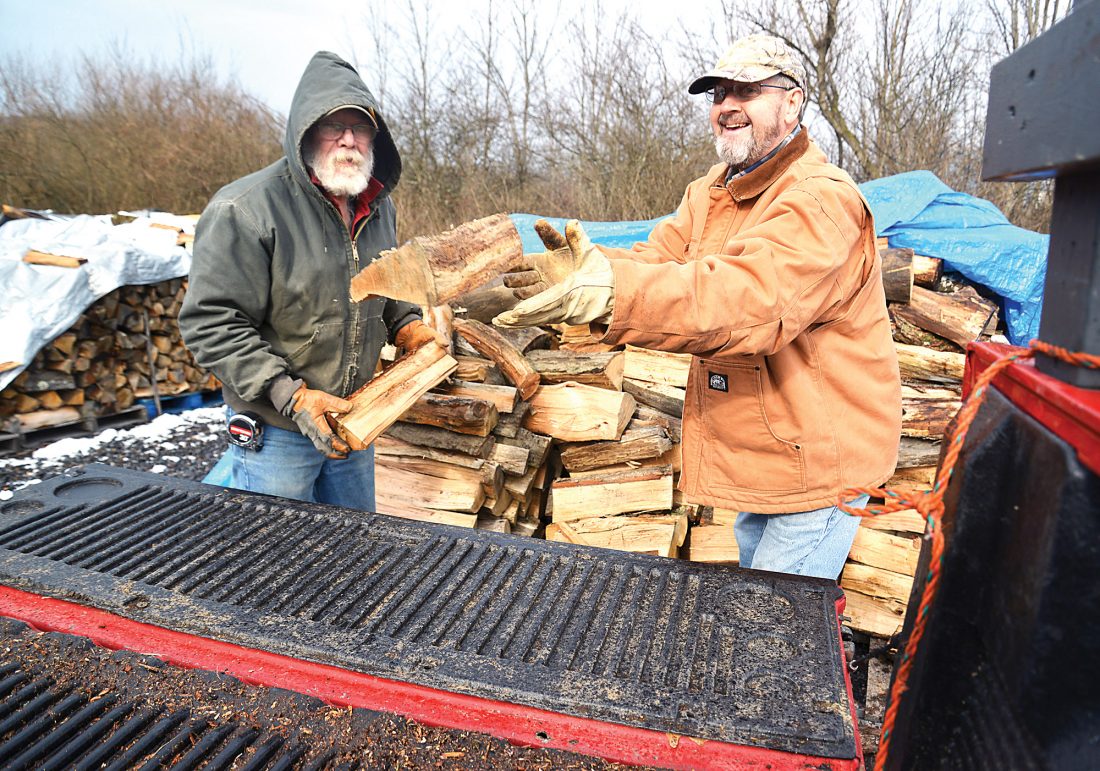 Winter can be a tough time for people who have little money to spare for energy resources to fuel their furnaces.

Helping residents who may have to decide between buying groceries or wood to burn in a heater or stove is Warmed Hearts Firewood Ministry.

The ministry is affiliated with New Life Worship Center and is led by Jim Rhodes of Altoona.

Rhodes said this is the fourth year for the ministry, but it was his heart’s desire to fulfill this need before that.

“I felt God had laid this on my heart about six years ago,” he said, ” but I didn’t know how to set it up.”

He said he searched online, but could not find a similar ministry in Pennsylvania.

Then, a coincidence occurred that Rhodes believes was a divine moment.

He said his pastor received a piece of mail that should have been delivered to New Life Alliance Church in East Freedom. The pastor called the Alliance Church pastor to explain the mix-up. Rhodes said during their conversation, the pastors talked about their ministries, including a wood ministry at the East Freedom church, organized by John and Christy Lawler.

After that, Warmed Hearts Firewood Ministry was launched. It is in its fourth year of serving residents who have wood-burning stoves or heaters but lack the means to buy the wood.

Rhodes said that while some residents qualify for the Low Income Home Energy Assistance Program, the benefits are not always enough to carry them through a winter, especially if it is a cold one.

Other people face circumstances that challenge their financial resources.

In another situation, a woman was burning kerosene to heat her home. Her husband had recently died, and she did not have the money to purchase natural gas for her furnace, but had a woodburner. The ministry was able to help her with a delivery of wood.

Rhodes said two other examples of the need for wood involved senior men. One gentleman could not afford gas and was no longer able to cut and split his own wood because of health issues. Another gentleman, who was in his 80s, ran out of wood in mid-February. He needed a truckload and a half to get him through the remainder of winter, Rhodes said.

The ministry has been able to help 20 to 25 families this year, and Rhodes said he and the other volunteers want it to grow.

Both he and Lawler said the need is great.

“It’s a huge need,” Lawler said, who has seen New Life Alliance Church’s ministry go from providing 40 cords of wood 10 years ago to between 120 to 140 cords of wood now.

“Heat is one of the essentials for life, especially in the winter months,” he said.

But obtaining all that wood is not cheap. While Warmed Hearts Firewood Ministry has received a few donated logs from tree services and a commercial logging service as well as wood from a former church member who sells firewood, it must purchase much of its supply.

Rhodes said a cord of hardwood costs between $160 to $180 and can cost up to $300 in the State College area. A 1,200- to 1,600-square-foot home would need about four cords of wood per winter with some families needing from six to eight cords, he said. He said the hardwood has become more expensive because paper mills have increased their demand for quality materials and have driven up the price of firewood.

To offset expenses, Rhodes said the ministry asks those receiving a delivery to prayfully consider giving a donation. It also receives donations from other sources, such as the New Life Worship Center Tax Team.

He said last year, the ministry ended the season with just enough money to pay a logger for a delivery of wood.

Once it is purchased, the wood must be allowed to dry out or season for six to eight months. The delivery last spring was for this winter.

Rhodes said the wood is stored on a gravel base at the church and volunteers are called upon twice in the spring and twice in the fall to cut, split and stack wood. He said it is a ministry where men like to make a contribution.

“It’s a band of brothers doing something that is missionary oriented,” he said.

While it’s mostly guys that take on the work, Rhodes said women and children donate their time and muscle to the job, too. He said a husband, wife and their two children are among the 11 to 21 volunteers who show up for a work detail. He said, the ministry feeds them a breakfast — sometimes a lumberjack meal with bacon, eggs, hash browns and homemade biscuits. The group works from about 7:30 to 11:30 a.m. on a Saturday and usually enjoys lunch together before heading home.

In between those sessions, Jim Yoho of Port Matilda can usually be found once a week at the church where he cuts, splits and stacks wood. He also cuts and splits wood for his use as he and his wife have several woodburners in their home and greenhouse.

“I love (cutting wood) and I love giving to people,” he said.

Yoho, who is retired, also has helped Rhodes deliver truckloads of wood. He said they pray with the recipients about other needs they may have and invite them to church.

“Some people are overwhelmed that we really care and that the wood is free,” Yoho said, adding that it is a blessing to help others.

Rhodes said he has a passion to help people through the ministry.

“God takes that passion to bring glory to himself,” he said.

He said the Warmed Hearts Firewood Ministry’s name has a special meaning.

“It warms our hearts when we deliver it. We pray it warms your heart to Jesus when you burn it.”

To donate to Warmed Hearts Firewood Ministry or to request wood for a family in need, contact New Life Worship Center, 600 Ritts Road, Altoona, or call 949-9282.