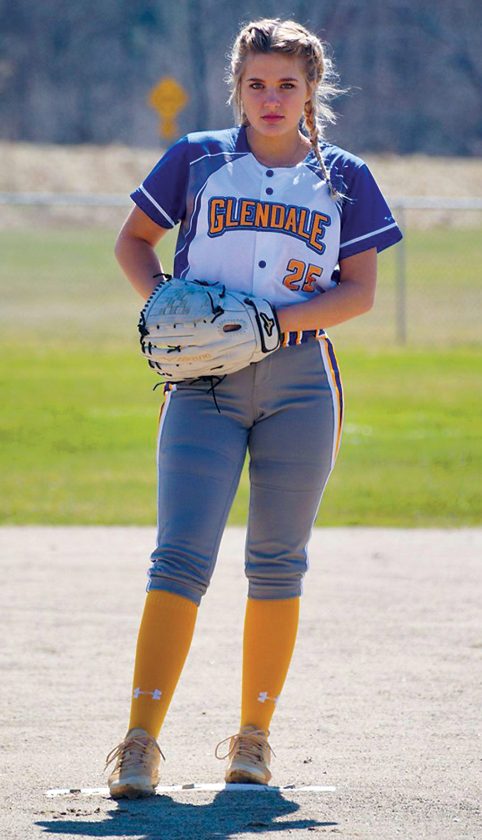 Courtesy photo Breanna Vereshack was part of three Glendale teams that played for a district title.

Senior salute: The Mirror is recognizing some high school senior spring sports athletes who missed out on their final scholastic seasons due to the COVID-19 pandemic.

But the Glendale senior lived it, survived it, and some may say even prospered from it. What are we talking about? A broken leg suffered in sixth grade while playing softball for a travel squad six years ago.

“It was at Garfield Park (in Altoona),” recalls Campbell, Glendale High School’s softball coach who was the home plate umpire in that game in 2014. “She’s from up the mountain … a lot of the kids on that team were. She was sliding into home plate. Immediately, you knew it was bad.”

Vereshack, who is graduating soon from Glendale after a solid career as a member of the Lady Vikings softball team, didn’t have time to feel the pain from what turned out to be a broken femur.

“Home plate was sticking up about two inches and my cleat got stuck. As soon as I broke it, I looked up and asked ‘Am I safe?'” she said.

“She called me out,” laughed Vereshack of her now coach’s decision.

Bobbi Vereshack was with her son, who had a Little League game the same night. Her husband, Bruce, was at the game and so was an aunt, a nurse who was able to stay with Breanna on the field until an ambulance arrived.

“I thought for sure she would be afraid to play again,” Bobbi remembered. “Softball was her life. You could not talk to her without softball being in the conversation.”

Older now, and getting ready to go to Robert Morris University this fall to major in Early Childhood Education and Special Education, Breanna fondly recalls the trip to the hospital.

There was still somewhat of a happy ending to the situation at the time.

“I still got the bike,” she laughed again.

And it’s that kind of spirit that helped Vereshack get over the fact that the current pandemic took away her final softball season.

“I have coached for 30 years, and I can say I have never coached a kid who loves softball more than her,” Campbell said.

A part of three teams that played for a district title, going 1-2 in those games, that also included several trips to the state tournament, Vereshack will not play Division I softball at Robert Morris. However, she is hoping she will play it as a club sport, which the Colonials offer.

“The thing I love about softball the most is the life lessons that it has taught me,” she said “It helped me with a lot of character development. It helps you with confidence and with how to work hard and come back from obstacles. If you want something, you have to work hard and push for it, and I did.”

Breanna pointed out that her travel coach said that when it comes to college, pick your major first and then see if it has softball.

“Look at your grades first because you won’t have softball for the rest of your life,” she said. “I always had my heart set on Robert Morris. I love the campus; I love it academically. I didn’t have to look too hard into it.”