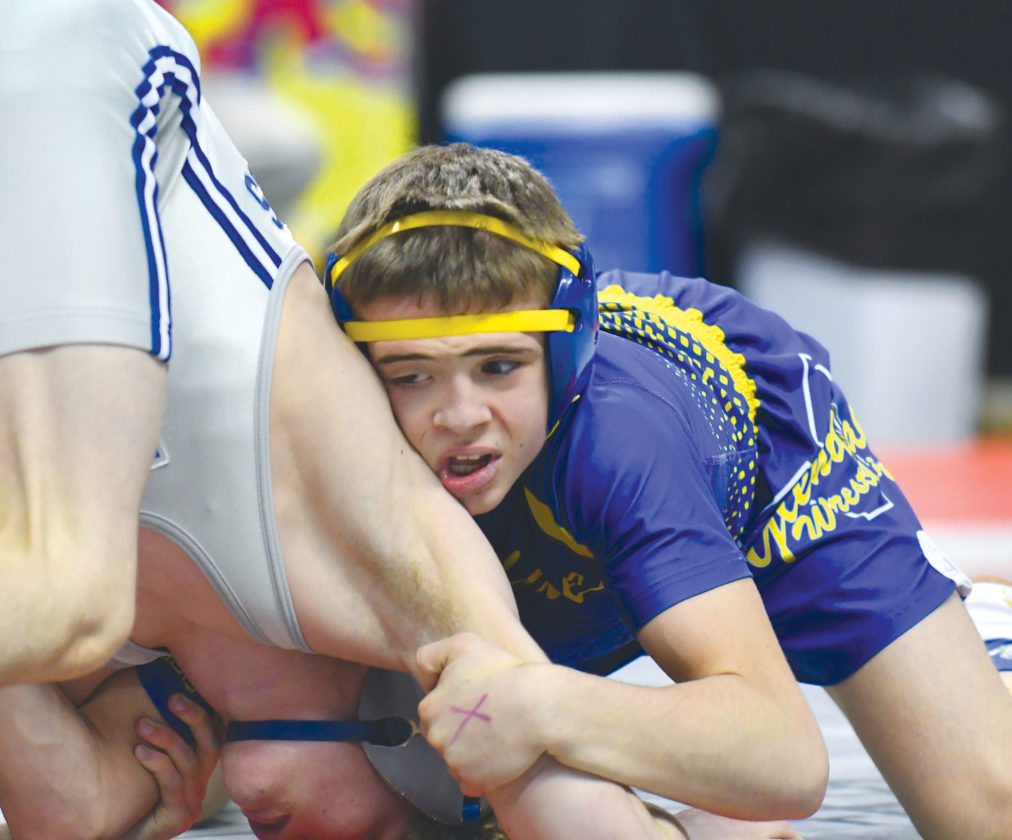 Photo for the Mirror by Tami Knopsnyder Glendale’s Brock McMillen works toward an overtime victory over Reynolds’ Beau Bayless.

HERSHEY — At least three bouts in the PIAA Class 2A Championships sent shockwaves throughout on Friday at the Giant Center.

And they involved area wrestlers.

“Oh man, he’s fun to coach,” Glendale coach Billy Dubler said. “He never ceases to amaze me. He was confident the whole time. He believed in himself the whole time.”

“It’s pretty exciting,” McMillen said. “I’m really happy. I knew I could win going into it. I was believing in my training, and I won.”

Earlier in the day, Chestnut Ridge’s Jared McGill knocked off Wyalusing’s returning state champ Creighton Edsell, 4-2, in the quarterfinals. Unfortunately for McGill, he was upset by Port Allegheny’s Jacob Kallenborn, 8-7, in the semifinals, suffering his first loss.

McGill’s teammate and returning state champion Justin McCoy avoided all the upset drama by reaching the 152-pound state title bout with ease. He won by injury default over Bishop McDevitt’s Tanner Updegraff in 3:49, and he rolled to an 11-1 major decision over Burrell’s Corey Christie in the semifinals.

McMillen and McCoy are the only area finalists as the other semifinalist, Penn Cambria’s Derek Brown, dropped a 15-9 decision to Susquehanna Township’s returning state champ Edmond Ruth in the semis. He reached the semis with an 8-5 win over Littlestown’s Carl Harris in the quarterfinals.

Including the finalist, seven area wrestlers will medal. McGill and Everett’s Garret Cornell (126) will wrestle third-place medals today. Brown and Huntingdon’s Landon Fisher (220) will go for fifth, while Central’s Braeden Swab (138) will go for seventh.

The finals and all the medal matches are set for 1:45 p.m.

McMillen is only the second Glendale wrestler to ever make the finals, with the other one being runner-up Tom Ross in 1986.

After he eked out a 2-1 win over Bishop McDevitt’s Nate Smith in the quarterfinals, McMillen found himself in overtime against Bayless.

With less than 20 seconds left, Bayless made a shot and McMillen spun behind quickly for a takedown with 9 seconds left to win, drawing a big reaction from the crowd.

“I knew he was trying to trap my elbows,” McMillen said. “I finally got it out and was able to go behind him.”

“We talked about that go behind,” Dubler said. “We thought that was going to be a way to get behind him and get some points. He likes to get in there and hang on elbows, and we thought we would able to capitalize on it.

McMillen will wrestle Mount Union’s Josh Boozel in the finals. Boozel has beaten McMillen three times, including in the District 6 and Southwest Regional finals. Boozel (37-3) advanced to the finals with an 11-4 win over Montoursville’s Wyatt Lutz.

“That’s good. I’m happy about that,” McMIllen said of the rematch.

“This is a guy who has been a thorn in his side all season,” Dubler said. “We’ll see if he can change it this time. Fourth time is a charm, right?”

McCoy was up 7-0 on Updegraff when a woozy Updegraff had to injury default. Updegraff defaulted out of the tournament.

In the semis, McCoy scored two takedowns against Christie in the first period for a 4-1 lead. In the second, he added an escape and takedown for a 7-1 lead. In the third, he kept building on his lead with a three-point nearfall off of a tilt.

“My game plan was to keep moving, try to score as many points as possible and open up the match,” McCoy said. “That’s my fifth time wrestling him this year, and he’s a tough kid to wrestle.”

McCoy (45-1) will also have a Southwest Regional rematch against Frazier’s Thayne Lawrence, whom McCoy majored in the regional finals. Lawrence (29-2) reached the finals with a 9-5 win over Mount Union’s Andrew Todaro.

“I’m really looking forward to tomorrow,” McCoy said. “I’ve wanted to be here since last year in the state finals. It’s a great feeling. I get a little nervous, but it’s so fun.”

Against Edsell, McGill struck first with a takedown in the first period. He reversed late in the second for a 4-1 lead, and it was looking good for McGill. McGill rode Edsell until he escaped with 24 seconds left. McGill defended a late shot for the win.

“I beat a state champ today, and I lost to a kid I shouldn’t have lost to,” McGill said.

In the semis, McGill was up 2-0 when Kallenborn reversed him to his back for five points and a 5-2 lead.

“He was trying to tilt the kid and he lost the tilt,” Lazor said. “He ended up on his back and gave up five points. We just slipped.”

McGill tried hard to come back, escaping and getting a takedown in the second to tie the score, 5-5.

McGill had no problem rebounding in his consolation semifinal, rolling to a 16-6 major decision over Mifflinburg’s Tyler Stoltzfus, who apparently didn’t like losing by that much.

“The kid was real dirty,” McGill said. “He was choking me, grabbing me by my collarbone and trying to break it. Anyone can be mean when they’re losing 16-6.”

“I couldn’t be prouder of him,” Lazor said. “To lose a match like he did in the semis, it’s hard to deal with, but to be able to bounce back in less than an hour and take it to him like he did just shows the type of leader he is of our program.”

McGill will wrestle Edsell again for his third state medal.

“That’s not what I want, but I’m coming back and righting a wrong,” McGill said of third. “I have to come back and get third and prove to everyone I’m the best kid in the bracket. I got hit in a big move.”

Cornell looked he was headed to the semifinals, but Saucon Valley’s Joshua Jones reversed him to his back late for a five-point move and a 5-2 win.

“Garret had a little let down in the quarterfinals,” Everett coach Rob Ripple said. “But he bounced back tough, and I’m proud of him.”

“It was a hard one to come back after, especially when I felt I could have won that one,” Cornell said. “I knew I had to get my head straight and just go for it.”

He responded with a pin and two decisions, including a 2-1 tiebreaker win over Athens’ A.J. Burkhart in the consolation semifinals. Cornell rode Burkhart out in the second tiebreaker period.

“I’m pretty happy about that,” Cornell said of wrestling for third. “That last one was a really close match, and I knew I just had to hold him down. It just took a lot of cardio, mental strength and physical strength.”

Ruth scored seven takedowns on Brown, including four in the third period. Brown put Ruth on his back in the second, but action was stopped for injury time.

“We had an opportunity, put him on his back, and they called injury time. I’m proud of Derek. He put the state champ on his back.”

Brown lost his next one to McGuffey’s Christian Clutter, 6-1, in the consolation semifinals.