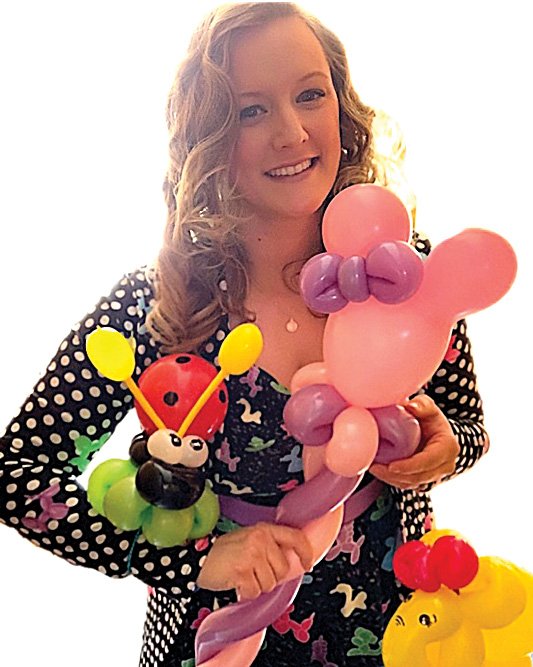 LAKEMONT — Kerrie Baughman likes to make people happy. In fact, she has an entire room in her home dedicated to spreading happiness.

She calls it her “balloon room,” and it holds thousands of balloons waiting to be turned into art.

Baughman, a clerical unit supervisor for Blair County, is also a balloon artist who goes far beyond balloon animals to create unique pieces. If she can think it, she can create it.

It was Baughman’s husband, Bart, who set her on a path of balloon artistry, although that wasn’t his intention at the time.

“My husband was dabbling in balloons,” she said. “When I saw some of the things he did, in my head I was imagining different things I could do with them.”

Baughman said art has been part of her life since she was a young girl and balloon art was another way for her to explore her creative side.

“Ever since I was little, I drew characters,” she said. “All through school, I took every single art class they offered.”

When Baughman turned her artistic skills toward balloon art, a new world of creativity opened, and she was determined to do it right.

Baughman, who had already been entertaining people as Miss Choo, an energetic clown with a friendly face, sought the advice of the late Denny Huber, a well-known clown and entertainer in Altoona.

“I was friends with Denny and talked to him about where to buy the supplies and getting the right things,” Baughman said. “Denny was a local icon, so I depended on his expertise on where to go and what to get.”

Armed with supplies and a vivid imagination, Baughman dove head first into learning everything she could about balloon art.

“I started researching about how to educate myself in balloon art and I found a couple of online colleges that offered different programs,” Baughman said. “I found there were so many cool things you can do with balloons.”

Baughman joined the Balloon Artist College, an online school that challenges her to try new techniques and reach new heights.

“You can make a balloon wall or something that hangs from the ceiling,” she said. “I made a broccoli costume that can be worn.”

Baughman shares her skills by going to schools and parties and leading people step-by-step on creating their own piece of balloon art.

“I like to share with people,” she said. “It’s wonderful to see their faces light up when they’ve made something of their own — especially the children.”

Baughman said sharing her art with children is one of her great joys.

She can be found at summer carnivals and birthday parties standing in front of a line of kids, making each one their own special piece.

Whether there are five or 50 kids in line waiting their turn, Baughman talks to each child and creates what they request.

“When I do events and kids are waiting, I don’t want to provide just that simple thing,” she said. “I like to talk to each of them and take the time to make them something really cool.”

Those few minutes Baughman takes to connect with each child sends them away with a creation that was made especially for them.

“I don’t make it like an assembly line where you just say ‘next.'” Baughman said. “Each child gets their own balloon, and not just any balloon. It’s a custom balloon just for them.”

Although the expense of keeping a full supply of materials can be high, Baughman donates her skills at certain events throughout the year.

Baughman’s creations, from balloon animals to centerpieces, floral arrangements and archways, have decorated the rooms of birthday parties, receptions and awards banquets.

Her balloon centerpieces and other decorative displays adorned the banquet hall of the Zion Lutheran Church in Hollidaysburg for the Adoptive Families Recognition and Appreciation Awards last November.

During the school year she can often be found at St. Patrick’s Catholic School in Newry — where her daughter, Elena, is a third-grader — decorating for school plays and graduation, or standing on the stage guiding the students step-by-step as they create their very own piece of balloon art.

Every August, her booth is one of the most popular at St. Patrick’s annual Festival in the Shade.

Lindsay Martsolf, of Hollidaysburg, met Baughman through a mutual friend. As president of the Central Pennsylvania Autism Community, a nonprofit for kids with disabilities, Martsolf has enlisted Baughman for fundraising events, as well as entertaining at her daughter’s birthday parties.

“We have used her for almost every event we’ve had,” Martsolf said. “She accommodates for what we need. If it’s a birthday party, she makes it specifically for that child and she has patience beyond belief.”

Martsolf said Baughman’s attention to detail and the way she accommodates each child helps make the events memorable.

“My daughter’s fourth birthday party was horse-themed,” Martsolf said. “Kerrie created a balloon horse that was as big as my daughter. It was amazing.”

“Kerrie is always happy,” Martsolf said. “She’s connecting with the kids and that makes them happy.”

Baughman’s attention to detail with her balloon art doesn’t end with the finished product. She uses environmentally friendly, bio-degradable balloons.

Baughman said she is against releasing balloons into the air and doesn’t use helium to fill them.

“I don’t believe in balloon releases,” she said. “It is unsafe for birds and animals. It can wrap around their legs, wrap around their beaks. A balloon pops in the atmosphere and comes down in fragments. Birds and other animals think it’s food. There have been so many studies done on it and it’s terrible.”

Through her balloon art, Baughman not only gets to show off her talent and exercise her imagination, it also gives her the opportunity to make an impact.

“I really like seeing people happy,” she said. “I love people. They are all different and it’s so great. Especially when you get to meet people you’ve never met before and all the neat little things you get to know about them. Everyone is so unique. Every single person is capable of doing amazing things.”

As Baughman continues to mine her imagination for new ideas, she said she will never stop learning and growing as a balloon artist.

“There are so many different ways to create things with balloons,” she said. “I’m always looking for ways I can make things look different. You can just go crazy with ideas. It is limitless.”