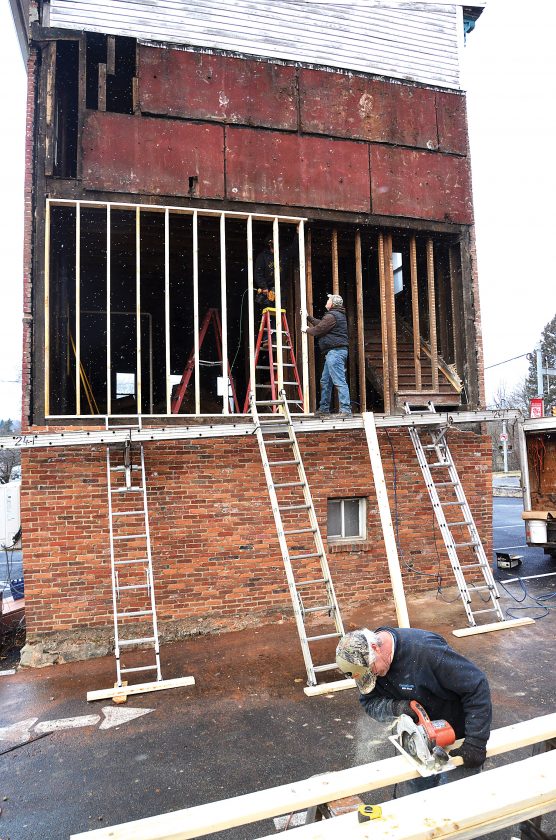 Workers with Wohler Construction, Duncansville, repair the back wall of Luigetta's Restaurant in Hollidaysburg on Thursday afternoon. / Mirror photo by Patrick Waksmunski

HOLLIDAYSBURG — It was business as usual for a while on Thursday at Luigetta’s Restaurant, despite some exterior damage to the 322 N. Juniata St. building.

“I got a call from the police about 6:30 a.m. saying bricks had fallen off the back of the building. Everything is fine inside the restaurant,” general manager Renee Kauruter said.

Kauruter said about 60 percent of the bricks came down from the top two floors of the building, which have been vacant for more than 40 years.

Hollidaysburg Borough officials were monitoring the scene, and although they said initially that there were no safety concerns and the restaurant could remain open, Luigetta’s was later told to close.

“They do think the damage was caused by the wind, and the age of the building,” Kauruter said later Thursday.

Workers from Wohler Construction of Duncansville were at work Thursday afternoon to repair the back wall of the building that houses the restaurant.

Mark Wohler, who owns Luigetta’s and the construction company, said the eatery could reopen as soon as Monday.

No other significant damage was reported throughout the area after high wind gusts early in the morning.

“Luigetta’s is the only thing we are aware of. It was superficial. There were numerous trees and wires down, but we have had no reported power outages,” said Mark Taylor, Blair County Director of Public Safety.

The highest gust reported at the Altoona-Blair County Airport was 40 miles per hour about 5 a.m., said

“There were some high winds. We can’t rule out gusts of about 50 miles per hour,” Douty said.

The highest gust at State College was 41 mph, and Reedsville had a gust of 51 miles per hour, Douty said. No significant problems were reported in Bedford, Huntingdon or Cambria counties.

“We had one telephone line down on Penn Street in Bedford, but no problems with electricity,” said Dave Cubbison, Bedford County Emergency Management Agency director.

“We had several trees and wires down but no structural damage,” Huntingdon County Emergency Management Director Joe Thompson said.

Cambria County Emergency Management Agency officials reported “nothing that we are aware of.”