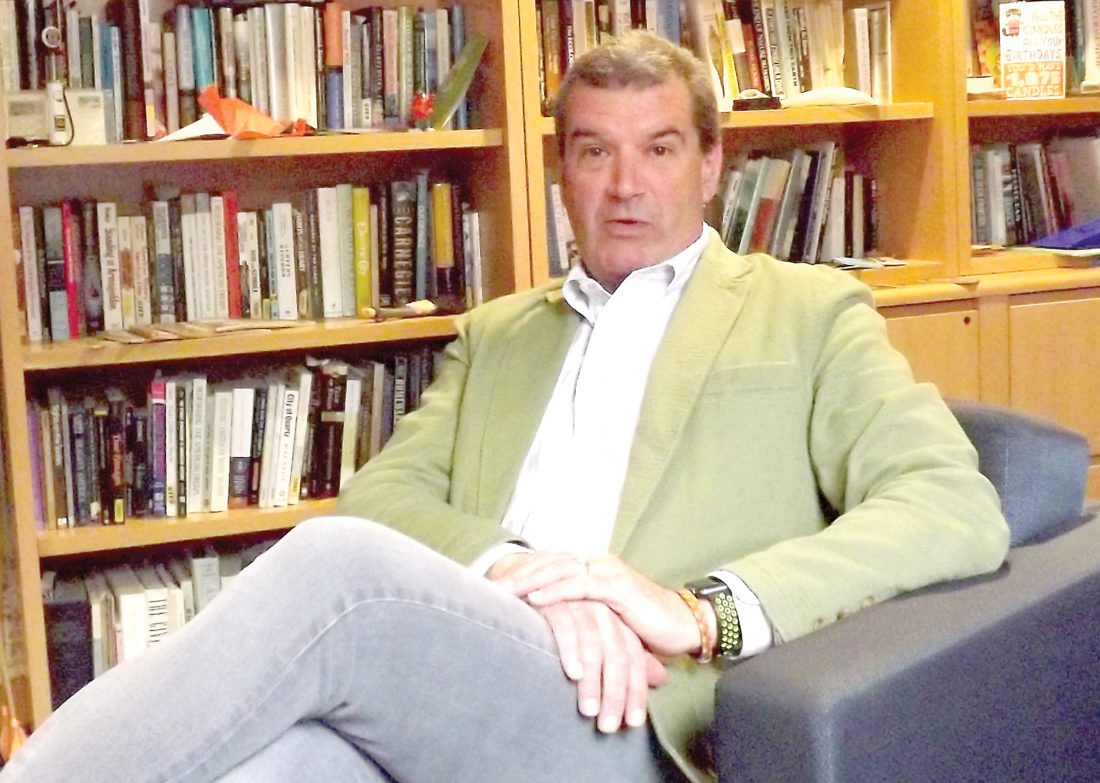 In his book-filled office, Penn State Altoona Professor Brian Black talks about his research and his selection as a distinguished professor. Mirror photo by Russ O’Reilly

Penn State Altoona Professor Brian Black’s office walls are so full of bookcases that the whale harpoon hanging there can go unnoticed by visitors.

He said it represents the energy transition of the 1860s from whale oil to kerosene made from petroleum, a topic that will be included in a book that he is currently writing about petroleum in American life.

He’s a prolific writer. His first book, published in 2000, “Petrolia: The Landscape of America’s First Oil Boom,” is about the oil fields of western Pennsylvania, the site of the first U.S. industrial boom towns in the 1860s and 1870s.

“I think it’s been much more rewarding to teach here (Blair County) because of what I teach than it would be really to teach any place else,” he said.

Black, a Hollidaysburg native, is distinguished throughout the Penn State University system, having been selected for the honor of distinguished professor last January.

He’s the second faculty member at the Altoona campus to receive that honor, established by the university’s Office of the President at the main campus in State College.

The honor is to recognize a select group of professors with exceptional accomplishments in teaching research and service.

“It was a great honor both because I’m a local guy and also because, in my other job as division head of arts and humanities, I know better than anybody that we have a whole bunch of faculty who deserve to be distinguished professors,” he said.

His specialized field of study is environmental history, which weaves history with science. His research deals heavily with energy transitions such as the transition from whale oil to petroleum and what energy source humans will use next.

“By pulling the curtain back on what petroleum has meant to us, I think we get a good idea for how we move forward, why we need to move forward and also at the same time celebrate where it got us and what we did with it,” Black said.

Black’s work both celebrates where petroleum has brought the world and signals the potential for another energy transition.

“I am not a critic. I am passionate about automobiles; I think the history of automobiles tells us a great deal about America. And even things in Pennsylvania, like the Lincoln Highway and diners, all the things that are related to it,” Black said in his office. “That is an important part of our story, but it’s never really been told with the full awareness of what’s been making it all possible. … It’s because we had a lot of oil. If we come to a time when, either we don’t have as much oil or we don’t want to use it for whatever reason, we can make a transition again. That’s how humans live, and particularly with the American economy, we are very able to do something like that.”

His colleagues in the biology department draw on his historical expertise, said Carolyn Mahan, Penn State Altoona Professor of biology and environmental studies.

She said the National Chapter of the Wildlife Society has sought Black to place energy use in historical context so that biologists could better understand how society as a whole came to use the types of energy it uses — and where society is going next.

“He truly is excellent in communicating across disciplines and helping scientists contextualize the effects of energy use and its global implications,” she said.

Black has been teaching at Penn State Altoona for 20 years, but he said his work is especially exciting now.

“Becoming a distinguished professor made me think about what I have achieved. One thing that’s been really funky is that the whole field, internationally, of environmental humanities has exploded — you have people from languages and the arts also doing environmental kinds of issues.”

Black was the invited opening speaker at the annual conference of the European Oil and Gas Network in Paris, France, in June 2017.

“It is clear that accomplishment in research is the paramount consideration for that honor. And in the area of research, Professor Black is, quite simply, a star,” Marshall wrote in his letter of support. “He is certainly prolific — I count five published sole-authored books, another under contract, two more with contracts pending (including an apparent re-release of the previously published Gettysburg Contested), plus three co-authored books, one co-edited book and four for which he has served as general editor. The publishers are consistently highly regarded presses.”

“Dr. Black has a long-established reputation as an outstanding educator both in and out of the classroom and he has been a vital faculty member and supporter of Penn State’s Environmental Studies program,” Bechtel-Wherry said. “Remarks from Dr. Black’s students give a clear indication that he is a teacher-scholar of the highest caliber who not only provides an outstanding learning experience through his classes, but has inspired and motivated many students to reach higher and grow into lifelong learners.”

Black’s graduate study took place at the New York University and the University of Kansas. He taught at Gettysburg and Skidmore colleges before coming to Penn State Altoona in 2001 to help start and lead Penn State’s only interdisciplinary program in environmental studies.

“I went to school for environmental history at the University of Kansas. Just by chance, Penn State Altoona was starting an environmental studies four-year program when I was on the job market. That’s the job I applied for and got to participate in the development of the four-year program. That’s been really rewarding,” he said.

“Basically, it’s about the relationship of humans and nature over time. Penn State Altoona is the only place to offer that class every fall for 20 years since I’ve been here,” he said. “We’ve really had that anchor of environmental history here and I think it’s made students much more interested in our region.”