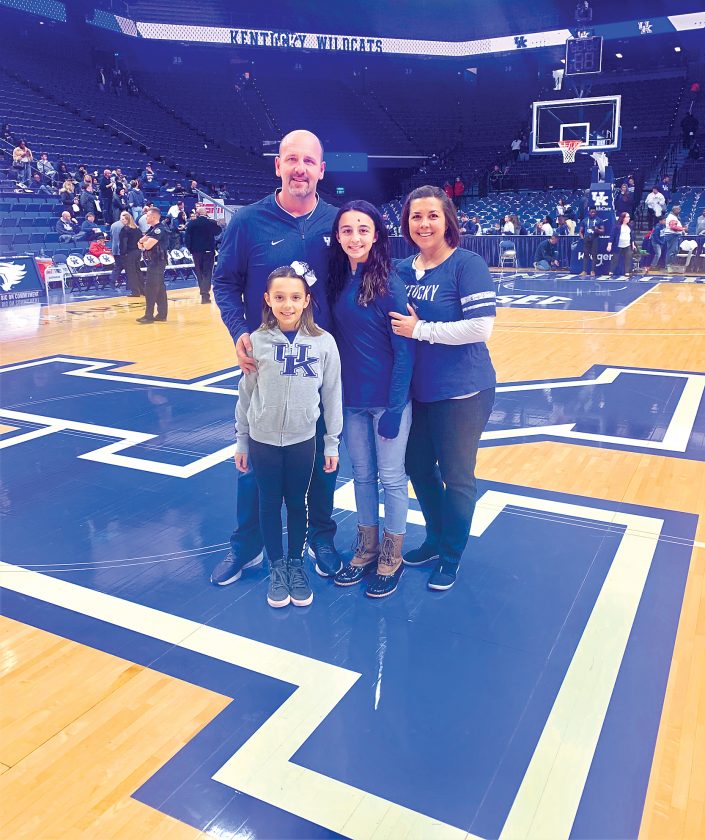 A journey that started in California, made its way to Altoona and wound up in Lexington, Kentuckywith a few stops along the way. This is not a travel brochure, mind you, but just a little ditty about an Altoona native named Paul Downey.

A 1993 Altoona Area High School graduate who played football, basketball and volleyball for the Mountain Lions, Downey is currently the Associate Athletic Director at the University of Kentucky. Yes … that Kentucky, the basketball-rich, John Calipari-Kentucky, and Downey has been a part of it since 2018 after stops in Clarion, Maryland, West Virginia and Illinois.

His specialty is academics for some 500-plus student-athletes spread across 22 sports under the direction of athletic director Mitch Barnhart.

“Kentucky was the first school in the country to provide a separate, physical space devoted exclusively to the academic use of student-athletes in 1981,” Downey said proudly.

Something else the former Penn Lincoln Elementary and Roosevelt Junior High student talks proudly of are his days in Altoona, most notably, the sports programs.

“I feel blessed to have been introduced to sports at a young age and to have taken a liking to a variety of sports,” said Downey, who moved to Altoona in the summer of 1984 from Huntingdon Beach, Calif. “More importantly, I have had incredible coaches who genuinely cared for all of their athletes.”

Downey, who has 25 academic counselors working under him as well as some interns, fondly recalls being a part of some of the first boys volleyball teams at Altoona.

“Karan Price was my first coach and Brad Weirich was another head coach in my time there, and KP was awesome,” said Downey, who lives in Lexington with his wife Carrie and two daughters, Jillian, 12, and Lydia, 8. “I was kind of a hothead back then, especially when I was messing up, not doing it right. It was a new sport for me, and she worked individually with me to try to develop new habits. She was incredibly patient with me and my temper.”

Downey also played basketball for coach Larry Betar and was a member of the Altoona team that featured Danny Fortson as a freshman and played Glen Mills in Hershey for a state title in 1991.

“Basketball was my first love. and I started playing in fifth grade for Penn Lincoln so I could hang out with my neighborhood friend, George Decker,” recalled Downey, who dropped names liberally of the coaches who helped him along the way.

There were the likes of Ken Macklin Sr., Don Verderame and Tom Otto at Altoona who all left an impression on him, as well as Betar.

“Coach Betar was focused on being ready. I distinctly remember him harping on walking onto the court ready, shoelaces tied, jersey tucked in, ready to go,” Downey said. “Karan Price and Tom Otto really believed in doing things the right way. I remember KP being a stickler as a teacher and a head coach. Now, there are so many policies, procedures and rules when working at a university and with the NCAA, so integrity in every decision is a must.”

Downey also played football at Altoona for three seasons alongside Jack Sipes, a friend back then and still a friend to this day. Downey was a tight end, and Sipes, who now lives in Hollidaysburg with his wife and three daughters, was a center for coach John Franco.

“We made it a point to see each other and our families during the holidays and special occasions,” said Sipes, who noted how special it was that Downey and his wife, Carrie, attended he and his wife Laura’s wedding. “I had no doubt that Paul would end up at a major university. I just wish it was Penn State. I keep ribbing him he needs to get to University Park.”

Sipes and Downey don’t connect as much in person as they did in the old days, but the friendship is still as strong through phone calls and messages over the years.

“After he moved to Illinois for the (Illinois State University) job, those in-person visits became less often, but we still talk on the phone regularly,” Sipes said. “He is a dear friend, and I value his opinion. He is truly a humble, caring and well thought-of friend, and with all the advice he has offered me over the years, I feel fortunate to have him as a true friend.”

Franco quickly remembered Downey when asked about his playing days with the Mountain Lions.

“An incredibly hard worker, a real quiet kid. He wasn’t as big as the other kids, but he out-worked everybody, and that helped get him on the field,” Franco said. “He was the kind of kid you knew because of how hard he worked and how intense he was. You knew that whatever he went out for in life, he would get. Always on time, really smart, really intelligent about the game.”

Downey says he has special memories of playing for Franco that he still can recall quite vividly to this day.

“While I did go to church on a fairly regular basis, I had not been introduced to the Lord’s Prayer for whatever reason, so when we locked hands and arms in the locker room before the first game of my sophomore year and coach Franco began ‘Our Father,’… I was silent and looking around. By the third or fourth week, though, I knew it by heart, and I still know it to this day. Every time I hear it, I immediately go back to taking a knee in full pads. It’s pretty powerful still today,” he said.

Even coaches like Galen Bickel, whose basketball camps Downey attended, along with Bruce Makin, who coached in the Mansion Park Summer Basketball League, left a mark on Downey.

“Many were willing to provide me guidance and instruction in an informal manner, such as Galen and Bruce. I grew and matured because of their investment in me throughout the years,” Downey said.

The long and winding road

Downey talked about how Makin helped him get ready for a shot at basketball at Clarion University by having him practice with Makin’s summer league team. And how did he do that? By having him defend against local star Mike Iuzzolino, who was on Makin’s team.

“He felt guarding Mike Iuzzolino would help me with my footwork as well as my ball-handling on the other end,” Downey said. “Jokingly, I think they were happy to have some fresh legs guarding him. Needless to say, neither I nor anyone else in Altona could guard Mike.”

After graduating from Altoona, Downey, whose father Dave still lives in Altoona, attended Clarion, where he got a bachelor’s degree in psychology.

“I went there to be a communications major and wanted to eventually become a PR (public relations) guy for Altoona like Tom Bradley,” Downey said.

It was there that he met Carrie, who is from Bridgeville, Pa. They’ve been married 20 years. After Clarion, where he was introduced to sports psychology, he wound up at the University of Maryland where he got his Masters in kinesiology with an emphasis on sports psychology. That led to West Virginia University where he worked on his doctorate.

“That would provide me training to work with athletes,” Downey said.

In 2012, he was hired by Illinois State University as its Associate Athletic Director for Academics and Life Skills. Then, in 2018, what he called an “incredible opportunity,” he joined the staff at Kentucky, where he is at today.

“My position came open when Bob Bradley decided to retire after 41 years of service to UK. Bob was a legend in the field of academic support for student-athletes, including being elected president of our professional association,” Downey said.

Now Downey oversees a department that provides comprehensive support from recruitment to graduation. He works on everything from course and major selection to eligibility forecasting, along with academic plans for each student each semester. He works with UK student-athletes who have become professionals but who want to continue working toward their degree.

“There are life lessons that I carry with me each day as I take my preparation for meetings and presentations very seriously,” Downey noted. “I believe that the actual event is easier than the preparation, if done right.”

Along the way, Downey has been able to work with both Calipari and football coach Mark Stoops, and Downey was in attendance when Kentucky beat Penn State in the 2019 Citrus Bowl, 27-24.

“Coach Stoops really cares about his guys and is very genuine with his interactions,” Downey said. “Hopefully, the win against Penn State was just the tip of the iceberg. It was quite ironic to play against Penn State in my first bowl game with UK and come away with the ‘W.’ Jack Sipes and I had some fun ribbing each other for the month leading into that game.”

Downey loves the fact that he and Calipari have their Clarion University connection to share.

“His western PA roots are strong, and it shows in his work ethic and his compassion for the guys,” Downey said. “Coach Cal has the guys’ best interest at heart in every decision. He trusts our staff and assigned academic counselors to do their job.”

Though Downey does not make it home quite as often as the old days — his grandmother, Iva Evans, still lives in Altoona — he really wants to establish some roots in Lexington after he and his family’s many travels.

“I see myself here for quite awhile,” he said. “My daughters are moving into seventh and third grade, and I would like for them to stay in one place through high school. We are close enough to family in PA and in Illinois. It really is a dream job that I never dreamed.”