State of Virginia getting two ’Cats 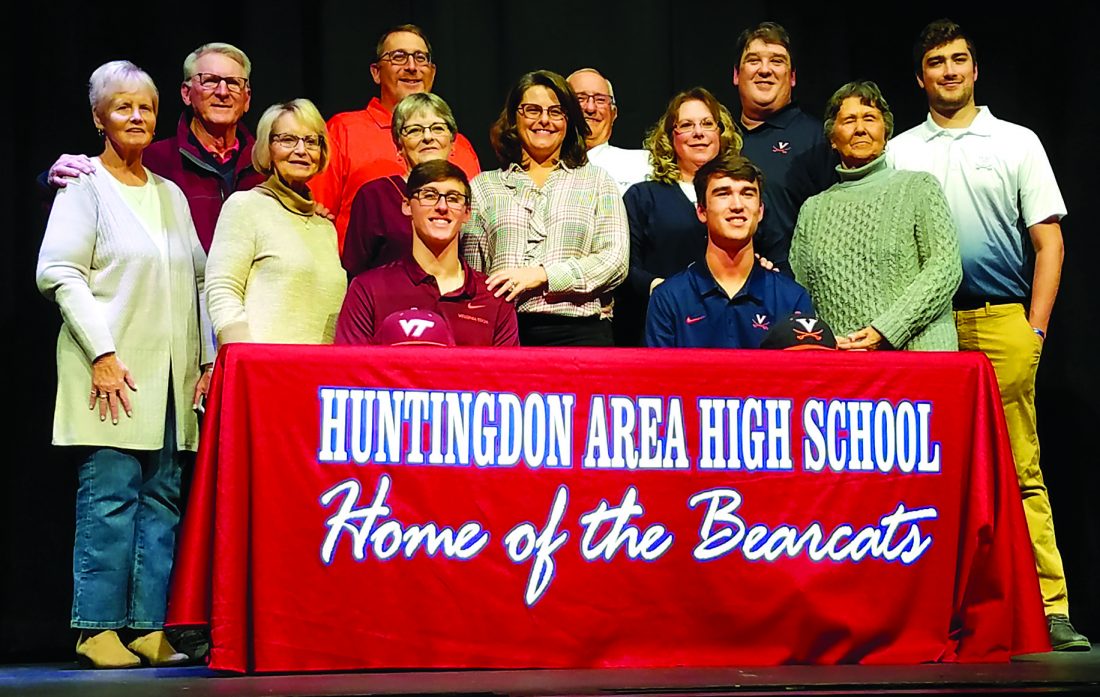 Courtesy photo Members of the Ritchey family surround Jackson (seated middle) and Rece (seated right) during their signing in Huntingdon on Wednesday.

HUNTINGDON — First cousins. Then teammates. And by baseball season of 2021, Rece and Jackson Ritchey will have one more thing to help describe their relationship — cross-state rivals.

The pair of Huntingdon Area High School senior pitchers made their intentions publicly known Wednesday at a ceremony in the high school auditorium that they were going to be taking their baseball talents to the Division I level by signing letters of intent.

Rece will be attending the University of Virginia in Charlottesville while Jackson will go to Blacksburg to attend Virginia Tech.

Both said that from the first time each of them stepped on their respective campuses, each felt like they were right at home.

Rece said he made his decision early in the process.

“Between freshman and sophomore year in the summer, there were a lot of schools. It was really tough,” he said of the process. “I never thought I’d say this, but I thought it was too much, but UVA was always good to me. It was perfect when I went down. Everything about the campus, the facilities, the program and education; I knew it was right for me. And plus, with it being close to home, it just seemed like the right fit.”

For Jackson, he took a bit more time to consider all his options, but ended up settling on his first choice, the Hokies, after building up a relationship with the coaching staff over the course of the past year.

“I really liked the look and the feel (Tech) had there. I kind of fell in love with that the first visit I was on,” Jackson said. “It kind of feels like home to me, so it was really nice to be there. I really enjoy myself while I’m down there.”

Jackson said that he and Rece had got together before Jackson had settled on his choice to consider possibly sticking together and heading to Charlottesville with his cousin to join the Cavaliers .

“We knew it would be cool if we could continue playing together in college, but I had to do what was best for me,” Jackson said. “He was already committed to Virginia, so I decided to go to Virginia Tech.”

Both current Bearcats baseball coach Oran “Butch” Woodward, and former Bearcat baseball coach George Zanic, were on hand for the ceremonies and had high praise for both pitchers.

“It means so much to this community. It’s not often that you get a Division I athlete from Huntingdon,” Zanic said. “To have two in the same class, and three in the last three years off the baseball team is very impressive. It says so much about their commitment to baseball and their commitment to hard work. They’re great kids, great students, great athletes, and it’s been an honor to coach them; to watch them grow up. Their universities are going to be well-served by having these two young men be student-athletes there.

In other signing news at Huntingdon, girls soccer standout Maddie DeForrest also made her college decision Wednesday. The senior forward missed her senior scholastic season due to an injury, but still impressed schools enough through her play in 2018 to earn herself a spot at Clarion University.

DeForrest was an Altoona Mirror first-team All-Star as a junior, having scored 18 goals and seven assists.