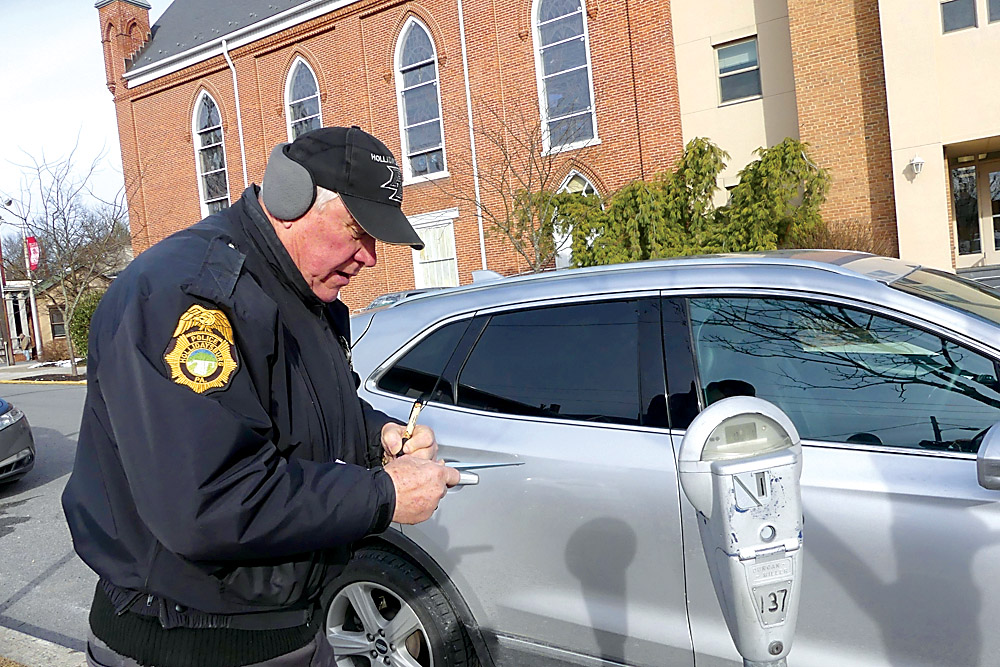 Jim Zimmerman prepares to ticket a car while working on Union Street between Union and Mulberry streets near Zion Lutheran Church in Hollidaysburg. Mirror photo by Patt Keith

As one patron fumbled in her purse, he offered her change for $1.

“I have a quarter. I know the routine, but thank you,” she said.

Walking onward, Zimmerman explains. “I try to help people out. I keep a dollar’s worth of change on me so I can make change for a dollar bill.”

Such an ebullient, helpful demeanor makes Zimmerman an ideal “ambassador” for the borough, said his boss, borough Police Chief Rodney Estep. The goal is to keep vehicles moving through the available spaces for the businesses and offices so enforcement is necessary.

“He’s the tip of the spear for the community. He does a tremendous job,” Estep said, noting that parking regulations need to be enforced evenly. The regulations exist to keep parking spaces free for patrons of local businesses and the general public — not for businesses’s employees or borough or courthouse employees.

Katrina Pope, who has served as the borough’s community and events director for almost a year, agrees.

“Even when I’m uptown for a meeting or to conduct borough business, I have to feed the meter. Jim does a great job,” she said, noting she received two tickets prior to working for the borough when a meeting has taken longer than expected. “I’ve become very diligent about feeding the meter.”

On Zimmerman’s first day on the job alone, he wrote 63 tickets — because he was walking at a fast clip.

One of the cars he ticketed belonged to Mayor Joe Dodson — the man who hired him. His lowest daily total is five tickets.

“Everyone knew Helen,” he said. So, when she stepped down for health reasons nearly eight years ago, she left a void. “I couldn’t have found a better replacement.”

After eight years of walking his beat, Zimmerman cuts a familiar figure to those who frequent downtown.

“He’s super friendly,” said one woman who asked to remain anonymous. “He always has a smile and speaks to you.”

Such friendliness while presented with the task of ticketing illegal parkers became his goal his first day on the job, Zimmerman said.

“I made up my mind I would say hello to everyone,” he said. “People are friendly for the most part, but I have one man and one woman who refuse to say hello.” Asked why he thinks they won’t return his greetings, he said with a chuckle — “I probably gave them a ticket.”

Since that first day, Zimmerman has refined his pace and pattern of patrol. He spots the red flags blinking on expired meters with a single glance down the street.

Other violations require attention to detail and a meticulous knowledge of the regulations. While shadowing him on this particular day, he ticketed a car taking up two spaces.

“He’s right in the middle of both spaces,” he pointed out. “See the space markings?”

Changes in regulations have meant changes in his practices, too. Several years ago, the courts ruled meter readers could no longer chalk mark tires on parked cars. So, now he writes down license plate numbers and the time he passes the vehicle at the meter.

He also tries to educate visitors as much as possible, he said. Pointing to a handicapped placard, he turns his ticketpad to show a printout of the regulation.

“A lot of people with the placards don’t know they don’t have to feed the meter,” he said.

His route is 2 miles long and takes about an hour to complete, he said.

“You can’t pump the meter full of quarters — the most time you can get is one quarters worth,” he said. The goal is to keep cars rotating into and out of the parking spaces — especially in the business district. Of the 133 meters (yes, he keeps count), only four have a restricted time limit of 12 minutes — two in front of the Post Office and two nearby in front of a coffee shop.

Marked with large, red lettered signs, he is continually surprised by how many people don’t notice the difference.

“Everyone gets a ticket,” he said, noting he recognizes people’s cars now — like the mayor’s — but enforces the regulations even-handedly. Marked EMS vehicles are the lone exception.

“Some people get upset if they are walking up and I’m writing them a ticket,” he said, but often they calm down “pretty quickly.” If they don’t, he tells them to plead their case to Chief Estep. “He and I are the only ones who can void a ticket.”

They don’t receive too many complaints, Estep said, and he credits Zimmerman for that. If a violator comes upon him writing a ticket, Zimmerman explains he is simply doing what he was hired to do.

“I explain to them that it’s a $5 fine if it is paid promptly within 10 days,” Zimmerman said. “I also warn them not to ignore it. If you ignore a ticket and it goes before a magistrate, the fine goes up — a lot. They add in court costs and suddenly you’re looking at about $100 or more.”

Estep notes that parking violations cost more in other communities like Philadelphia, where a ticket can cost $36.

Hollidaysburg also tries to make submitting payments convenient with two drop off boxes where payments and tickets can be placed. On this day, he removes about six gold envelopes with their payments.

“I hate confrontation,” Zimmerman said. “I don’t like to write tickets, but I have a job to do.”

As he soon learned on the job, he no longer places tickets under a vehicle’s windshield wipers. Instead, he slips the ticket between the window glass on the driver’s side, right above the door handle.

“At first, I couldn’t believe how many people drove off and not even see the ticket on the windshield. I’d see the ticket flapping under the wiper or laying in the street after it would come loose. Now, I place them where they can’t be missed.”

Employment: Parking meter enforcement since March 19, 2012; previously a day care center van driver and an employee at Fonda in Williamsburg from 1966 until 1983, when he injured his back in a fall, resulting in five surgeries.

Volunteerism: Served as a Hollidaysburg Area Girls Softball coach and umpire for 35 years

Hobbies: Fishing, woodshop/woodworker, member of the Blair County Antique Auto Club and has a 1964 Studebaker