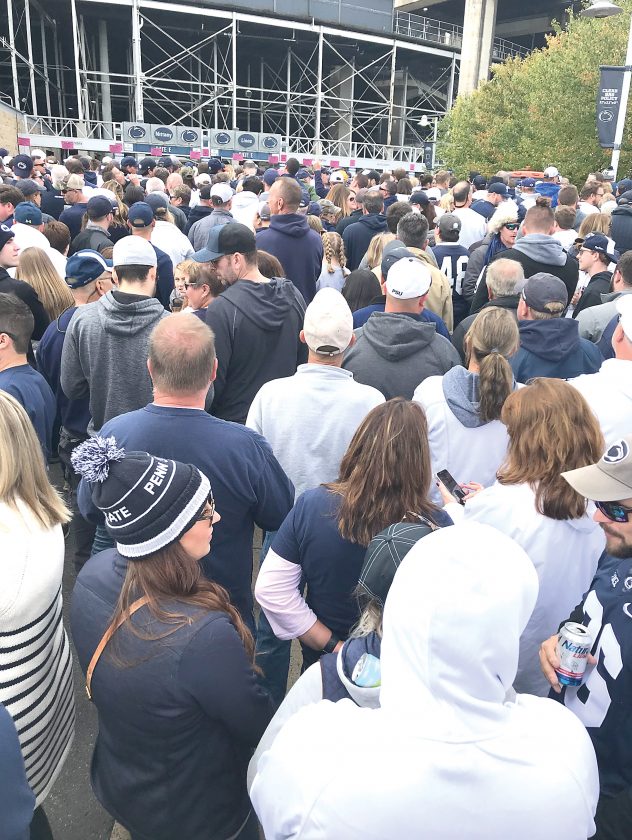 STATE COLLEGE — Penn State is gearing up for arguably its biggest matchup of the season — tonight’s whiteout game against Michigan.

However, while fans are hyped up for the big game, they’re also bracing for challenges many have faced this season.

To kick off the 2019 season, Penn State introduced a new parking system that has not been met well by many fans. The new system requires fans to follow a specific route to both park in their designated spot and leave State College after the game.

Fans have waited in hourlong traffic as they leave Happy Valley, and as the Michigan game will draw more than 107,000, some are anticipating a very long night as they depart Beaver Stadium.

Additionally, Penn State football’s ticketing system has sparked criticism from disgruntled fans this season. As Ticketmaster moves toward a more mobile-centered system, this has caused issues for fans as they attempt to enter the gates.

Fans can still use paper tickets to enter the stadium but also have the option to use mobile tickets. However, students must now access their tickets through the Ticketmaster app and scan a barcode at the gates.

People cannot take a screenshot of the barcode, and many students have faced difficulties when attempting to pull up their tickets.

She misses the old system, when students scanned their ID cards to enter the stadium.

Because the Wi-Fi at Beaver Stadium doesn’t always connect due to the volume of phones, Brady struggled opening the ticket barcode on her phone and had to walk to East Halls to access the ticket on her phone.

“I don’t understand what the point of the (new ticketing system) is,” she said. “It’s an inconvenience.”

Lines were always long outside Gate A where students entered, and Brady said they’ve gotten worse.

As some students struggle to access their tickets, others have struggled to scan their barcode at the gate.

For non-student fans, the lines have gotten worse, too. Fans have taken to social media to express their disdain. Some have waited nearly an hour to enter the stadium, including for the last home game, Oct. 5 against Purdue.

“My group got in line at

Issues with fans entering Gates B, C and D seem to also stem from technology-related issues. Barcodes won’t scan, while other fans struggle to open the tickets on their Ticketmaster app.

According to the Ticketmaster website, a new mobile ticketing system was introduced in April.

Fans who use the mobile system must download the app on their phone, sign into their account, go to the “My Events” page and open the tickets barcode to enter any event.

Penn State sent an email to its season ticket holders after the Purdue game acknowledging the situation and cited a staff shortage.

“This shortage of staff has impacted our ability to get fans into the stadium in an expedited manner,” the memo said. “As your fan experience is a top priority, we are working to increase staffing to ensure the best game day experience possible. Fan survey data indicates fans entering the stadium an hour prior to the game have experienced average wait times of less than 10 minutes. Fans entering the stadium less than an hour before the game have experienced wait times of up to 30 minutes or more. Please consider an earlier arrival to enjoy team warm-up and the Blue Band pregame performance, concession discounts and more.”

Penn State spokeswoman Kris Peterson said Friday that 38 percent of patrons have elected to use mobile ticketing for football this year.

“We have implemented mobile ticketing for our other sports with success, but we also have the option to print tickets for those who might not be able to utilize the technology,” she said. “Regarding Michigan, we continue to communicate with our ticket holders regularly to ensure they have the best game day experience possible. We continue to evaluate our traffic, parking and gate plans to make improvements as necessary.”