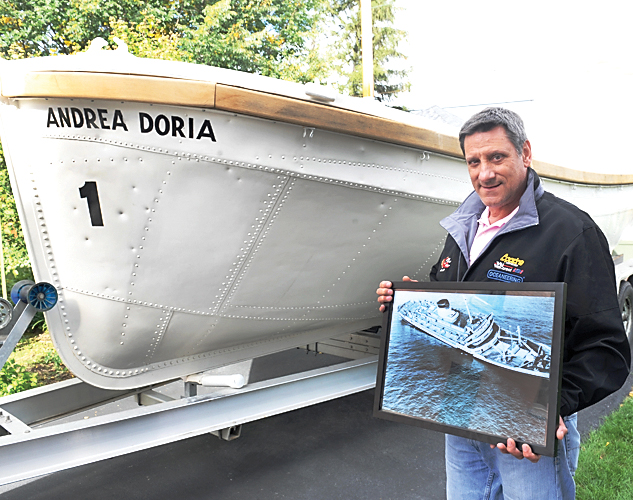 Courtesy photo / Mark Koch of Altoona, who enjoys naval salvage, knows everything about the Andrea Doria, an Italian ship. He considers preserving the ship’s lifeboats and sharing them with people to be an honor.

A local man with a hobby in naval salvage, who owns two lifeboats from what’s been called “the greatest sea rescue in history,” is pulling one of them in a Columbus Day parade today in New York with an expected 1 million in attendance.

Mark Koch of Altoona knows all there is to know about the Italian ship, the Andrea Doria.

For Koch, preserving the lifeboats from the ship and sharing them with people is an honor.

The Andrea Doria was an ocean liner ported in Genoa, Italy, Christopher Columbus’ birthplace, hence the connection with the parade, Koch said.

Named after the 16th-century Genoese admiral Andrea Doria, the ship had a gross tonnage of 29,100 and a capacity of about 1,200 passengers and 500 crew. Andrea Doria was an icon of Italian national pride.

Of all Italy’s ships at the time, Andrea Doria was the largest and fastest.

But the Andrea Doria is most famous for her sinking in 1956. While 1,660 passengers and crew were rescued, 46 people on the ship died as a direct consequence of a collision.

The Andrea Doria and the Swedish Stockholm collided in fog off the Massachusetts coast at 11:10 p.m. on July 25, 1956, and sank 11 hours later. Five people aboard the Stockholm also died in the collision.

The top-heavy Andrea Doria immediately started to list severely to starboard, which left half of its lifeboats unusable. The consequent shortage of lifeboats could have resulted in significant loss of life, but the ship stayed afloat for over 11 hours after the collision.

Only two lifeboats of the ship remain. Koch has owned both of them since 2008 and has restored them to museum quality. He has taken the boats to be displayed all over. He has even launched one in the New York Harbor for an anniversary event in 2016. About 200 people, including survivors of the wreck, were present.

Some of the survivors of the wreck will also be participating in the parade, riding in the lifeboat that saved them decades ago.

“ABC will be highlighting the boat and survivors will be ringing the bell for those who died,” he said.

A million people will be watching, Koch said, citing information from the Columbus Citizens Foundation sponsoring the parade.

“It is an opportunity to show this lifeboat, celebrate the survivors and revisit Italian American history,” Koch said. “It was built in the birthplace of Christopher Columbus. It’s the Italian American connection.”

One of the lifeboats, No. 13 has a mysterious story. Koch has spoken with a survivor who was rescued on that boat, Mike Stoller. Stoller is a legendary songwriter for stars including Elvis. He is credited with “Hound Dog” and more than a dozen No. 1 hits, including the classic “Stand By Me.” Stoller said No. 13 is his lucky number. But after No. 13 transferred survivors to rescue ships, it was left out at sea.

Where the boat was for all those years is a mystery.

“No. 13 was never brought back in. And it did not resurface until 25 years to the day of the wreck. It was adrift in the Atlantic. But it’s 40 feet long and holds 156 people.”

That’s not the boat that will appear for the parade, however. Koch is pulling the No. 1 lifeboat. He, his daughters and his mother, all of whom live in Altoona, are set to be with him during the Columbus Day parade today.

There is another local connection.

George Pacifico, an Italian immigrant, made his voyage to Pennsylvania in 1953 on the Andrea Doria. He was interviewed by WTAJ in 2016 about his experience.

“My father and I went to Naples, and from Naples I took the beautiful boat, the Andrea Doria,” Pacifico told WTAJ.

Three years later the ship on the coast of Massachusetts would collide with another ship and sink to the ocean floor.

Pacifico said it was heartbreaking.

“I cried (the ship) was really … it was home away from home,” Pacifico told WTAJ.