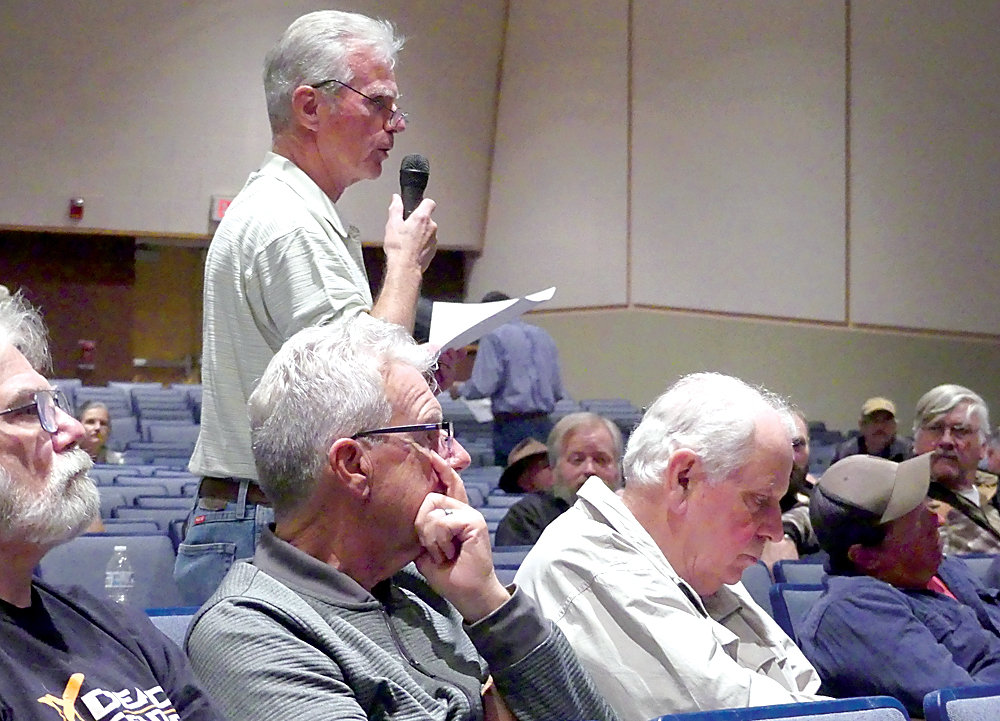 Terry Hyde of Blair County asks a question of a panel of Game Commission biologists and spokespeople at a CWD information session at the Hollidaysburg Area Junior High School on Tuesday evening. Mirror photo by Russ O’Reilly

HOLLIDAYSBURG — By this time next year, the Pennsylvania Game Commission’s plan to limit the spread of chronic wasting disease will have been launched.

That plan calls for increased tag allocations, season extensions and removing point restrictions. And if those measures fail, the Game Commission would try targeted removal of deer closest to areas where deer are known to be infected.

The crowd was sparse on Tuesday for the Game Commission’s question and answer session at the Hollidaysburg Area Junior High School. There were 10 Game Commission officers, but only about 60 people in the crowd.

Commission spokeswoman Courtney Colley gave an overview of the draft plan, and three Game Commission biologists were on hand to answer questions.

The plan was formed with help from organizations including the National Deer Alliance. Alliance President and CEO Nick Pinizzotto of Indiana County was on the panel that fielded questions from hunters on Tuesday.

“The people in the Pennsylvania Game Commission, more than any other state I’ve worked with, have reached out to more people to form their plan,” he said.

The Game Commission is taking public comment on the plan through February.

A vast majority of deer samples in the state that tested positive for CWD came from Blair, Bedford and Fulton counties, biologists said. This area is by far the most affected area, with the prevalence rate doubling annually, according to the biologists.

Biologists noted that CWD can only be tested for in deer that are dead because it involves vital organs, especially the brain. That’s why its plan relies on hunters to help. The commission urges hunters to donate heads of deer they harvest by depositing them in designated boxes throughout the county.

Through an increased hunter harvest next year, the commission hopes to keep the prevalence rate down. If the rate is higher than 5 percent after the harvest, then USDA sharpshooters will carry out small-scale targeted removals of deer in the same family as infected animals that are identified through samples tested.

The prevalence rate is defined as the percentage of total samples tested that are positive for CWD. Currently, the rate in this area is over 4 percent, biologists said.

The tricky part of maintaining that prevalence rate is that biologists don’t exactly know how small the deer population has to be to keep it there. That’s one of the main questions hunters had: How many deer does the commission want hunters to kill in order to prevent the need for targeted removal?

“Whatever the prevalence is after the hunters’ harvest, if it’s under 5 percent, there will be no targeted removal,” Matthew Schnupp, director of wildlife management, said.

Some in the crowd asked specifically how long it would take for results to come back on their individual deer head. Some last year never got results and ate their deer meat not knowing whether the deer had CWD.

The Centers for Disease Control and Prevention don’t recommend eating deer with CWD, although the disease has not been shown to transfer to humans, Colley said.

“CWD was discovered in 1967, and there has never been a link to human illness,” Colley said.

Nonetheless, she said there will be two labs next year so that results from deer heads will be sent to hunters quicker to give them peace of mind that their food is CWD-free.

The proposed CWD plan can be found at pgc.pa.gov, and the public comment form can be submitted online or mailed.