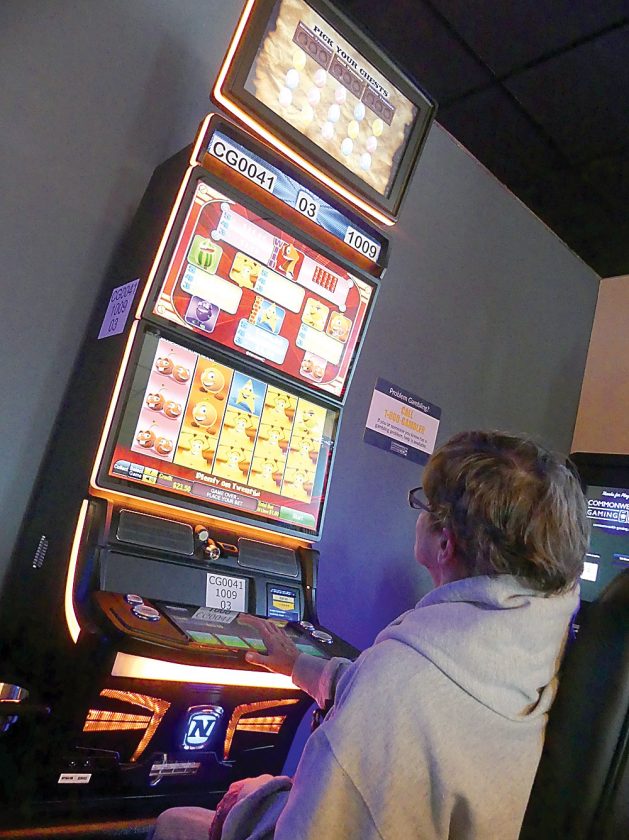 Video Gaming Terminals are low-stake slot machines closely regulated by the Pennsylvania Gaming Control Board. Keystone Restaurant and Truck Stop is the only site in Cambria County to meet the state’s strict eligibility guidelines.

Her daughters, Ashley and Jamie Hurtack, waitresses at the restaurant, encouraged her play as she tried different games. “I stopped up to see what it was all about,” Donna Hurtack said, as she watched her game credit and winnings ebb and flow. After 20 minutes, she put in another $20 and was still playing 40 minutes later.

And that is exactly what co-owners Mike and Jessica Ritchey are hoping. “We want to become a destination location,” Mike Ritchey said. “We wanted to offer more to our customers.

“Come evening, we will have 20 or more trucks pulled in here for the night. The drivers come in, get something to eat and will play a bit before they return to their sleeper cab for the night. With the new regulations, a truck can’t move for eight hours, so we hope this helps them pass the time.”

Throughout the day, other relatives of employees and some regular customers had been playing — and winning. One customer hit for $400 and three others hit for $100 each.

The Pennsylvania Legislature approved truck stop gaming in 2017 and the Keystone is among the first family-owned businesses in the state to operate the games, Amy Christie, executive vice president of government for Commonwealth Gaming, said in a news release.

Located at 208 Keystone Drive, off the Munster/Portage Exit of Route 22, the family-owned business grew from a gas station to a truck stop and restaurant. Keystone is among a handful of locations that qualify to participate in the new Video Gaming Terminal industry in Pennsylvania. The truck stop was approved by the PA Gaming Control Board after an arduous background check, facility review and Keystone’s choice of partnering with Commonwealth Gaming as its terminal operator, Christie said.

The restaurant removed 21 of its 200-plus seats to put in the gaming area, which features five VGTs, a couch and a machine that makes change and dispenses winnings.

Located adjacent to an eating area, a large sign states anyone under age 21 is prohibited from entering, and staff received extensive instruction prior to the opening, including on how and when to card a patron if he or she looks younger than age 35.

“It’s totally hands-free on our part. We never touch or even see the money,” Mike Ritchey said. Multiple video cameras provide a live feed to another area of the restaurant so it can be closely monitored, and it is livestreamed to Harrisburg.

Rutters at 234 Kuhn Lane, Duncansville, is about 12 miles away and is the next nearest truck stop licensed for VGTs.

“Everyone has been very supportive,” Jessica Ritchey said.

While the VGTs emit various sounds to guide players and have numerous flashing lights, the owners said they have the volume down “as low as it goes” so dining patrons aren’t disturbed and can easily converse.

“With the addition to our family operation, I am certain our founders, my Pap and Gram, are smiling down upon us. Especially, my Gram, she loved the slots,” Mike Ritchey said. “As an independent family-owned business, we wanted to be able to offer the new entertainment to our patrons to continue to evolve our business and keep up with corporate-owned truck stops. We do not want to be another closed independent business who just couldn’t compete with the deep pockets of corporate America. We want to continue to serve our community for another five decades.”