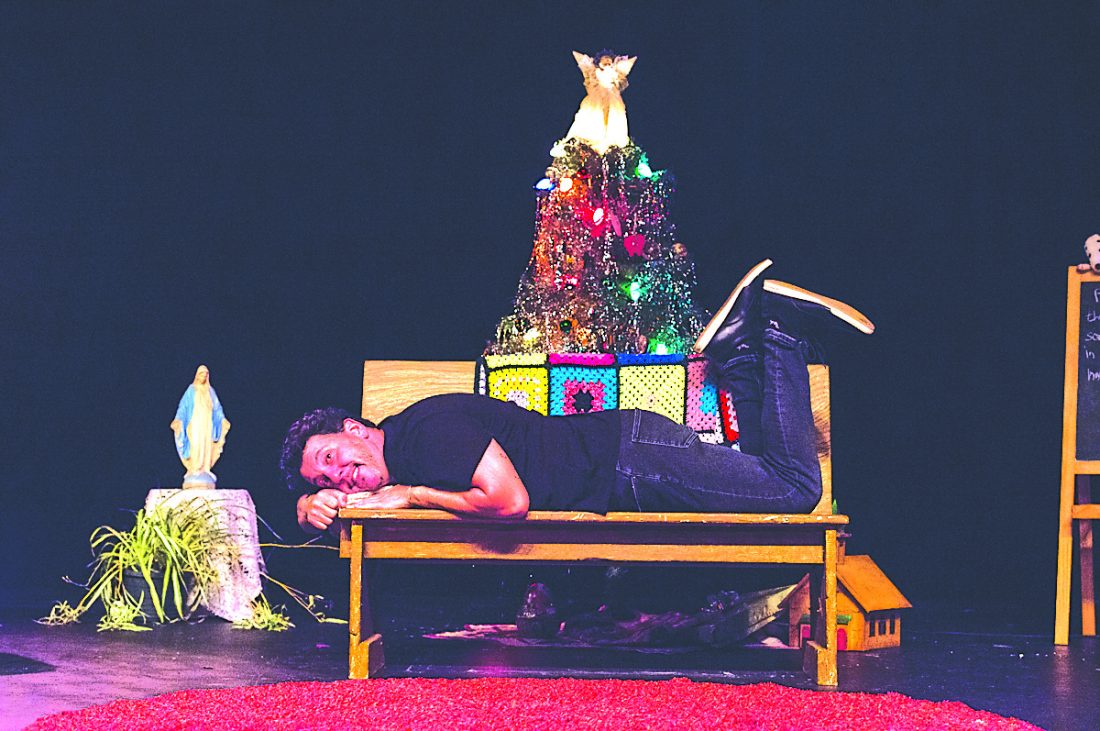 Courtesy photos Altoona native Tom Sweitzer, shown above and below, returns to a local stage in “Meatballs and Music” his biographical, one-man show which takes the audience through lessons in healing and forgiveness. The show will be performed at The Church in the Middle of the Block.

Altoona native Tom Sweitzer, a prominent Virginia music therapist, advocate, author and screenwriter, returns to a local stage in “Meatballs and Music” his biographical, one-man show which takes the audience through lessons in healing and forgiveness during several shows at The Church in the Middle of the Block.

Sweitzer plays all 14 characters; assisted by a few props. Self-admittedly, the show is gritty, dark and has adult language. Sweitzer hopes to provide attendees with hope and a reminder that “we are all fully human, broken and deserving of dignity.” 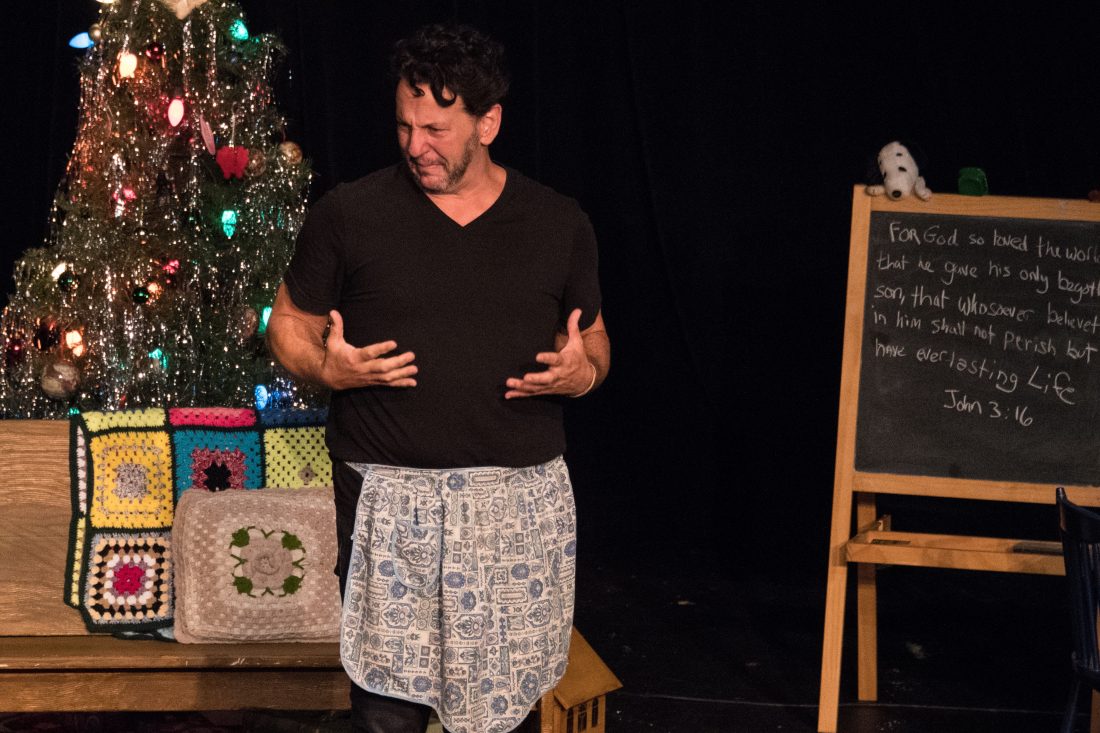 He premiered the show in September and then traveled to York, Pennsylvania, and New Orleans, Louisiana. Ultimately, Sweitzer plans to work with a professional theater company and tour nationally — performing in New York City.

“It’s my dream. It’s my true story,” he said. “I hope people come knowing it is intense. Many people leave feeling uplifted and tell me I’ve created a universal message.”

After seeing the play’s Virginia debut, one attendee wrote him an email.

“I had never met her before and she wrote me and told me she went home and called someone she hadn’t forgiven for more than 10 years,” Sweitzer, 47, said via a phone interview. “The show motivated her to forgive someone she couldn’t forgive more 10 years. You can’t get any better than that. Applause is very nice but what really does it for me is knowing someone got something out of it and that their life will be altered a little.”

Sweitzer, who previously wrote the play “Porches,” about his Altoona neighborhood, said “Meatballs and Music” takes an unflinching look at his growing years, including his summers spent at his mother’s family’s amusement park in Tipton. His mother Kathy was a DelGrosso, of sauce and amusement fame. Those extended family relationships — and summer’s spent at the park were a respite — showed Sweitzer how life could be different and better.

Sweitzer said he remains close with his “many, many, many” cousins. Those relationships also made it natural for show producer Christopher Cook to sign up the sauce makers as sponsors.

“The DelGrosso Family and the DelGrosso Family of Companies makes it a mission to give back to the region who has supported us. We feel this was a great way to support the local arts community. We have long been fans of Tom’s talents and the title of this show makes it a great tie in for us … who doesn’t like “Meatballs and Music,” Joe DelGrosso, president of DelGrosso Foods.

In this 90-minute play, Sweitzer plays 14 different characters — his terminally-ill yet compassionate Italian mother, his abusive, schizophrenic father are counter-balanced by the positive influences of the DelGrossos, Sunday school teacher the late Erdean Grissinger and mother’s best friend, Janine Valentino, who he said is “still like a mom to me even now.”

His parents were both ill; his mother physically, with diabetes and heart disease, and his father mentally ill. Both parents spent years in and out of hospitals. They were also very much a product of the times — when smoking three-packs of cigarettes a day was “normal.”

“This play is actually the culmination of everything I’ve ever done,” Sweitzer said. “It takes all my years in theater, music therapy, personal stories and weaves it into a tale about a man saved by his community and music.”

Sweitzer said he remembers sitting with his grandfather in the park when he was as young as 4 years old.

“The DelGrossos are a huge part of why I am still here and are the amazing side of my family … that side of family represented consistency and showed me what family meant — I was very blessed to have them as family. They showed me an alternative life — that I didn’t have to live in chaos and fear. They also believed in me … my passion for theater and that I could be bigger.”

But his real motivation for sharing his story is that he feels the world is in need of a hopeful story full of forgiveness.

“The story of my dad and I has everything to do with forgiveness,” he said. “Forgiveness is the core of the show. It’s up to us to see them (people who hurt us) as fully human and worthly of love. You have a choice — it’s up to us (those who are hurt/abused) to see them as fully human, as broken as you are and deserving of dignity and worthy of love.”

He credits his blue-collar immigrant extended family and this community with his survival.

“I had to work hard from the time I was 8 and swept the floor of the penny candy store to make money so my family could live. I grew up in an authentic environment where nothing is put on. No one is trying to be anything they’re not and that’s why I love to come home.”

Before his father died in 2010, the two talked.

“It’s a delicate story about my father. I knew I wanted to tell it and he wanted me to tell it — but he wanted me to wait until he was no longer here,” he explained. “I know it is risky and there is a lot of intensity to it,” he said explaining why he kept the cursing such a prominent part of the play.

“It’s showing my father as he really was. The F-word was part of him. I haven’t lessened the intensity, the language or his anger because then it would not be telling the true. There is authenticity in how my parents were. They were put on this earth for a short amount of time and they did the best they could do. In the ’70s the resources weren’t there.”

Sweitzer has healed and moved past the hurts inflicted in childhood thanks to intensive mental health therapy. As a music therapist, he specializes in adolescents who struggle with abuse, depression and suicide. In his professional workshops, he preaches the importance of a therapist who practices self care.

He continues with his own mental health therapy and takes care to get enough sleep, water, exercise, reading, time in nature and reading as well as social time with friends and his family of choice.

“This is really a thank-you note to all who helped me — all the relatives, neighbors, friends and teachers. I don’t claim that what I went through is the worst thing in the world. I am so grateful I went through it because I would not be the person that I am. From struggle comes creativity, if you want to use it that way.”

As producer of “Meatballs and Music” actor/businessman, Christopher Cook of Altoona, said this is the first of three shows he will bring to The Church in the Middle of the Block in 2020.

Cook, part-owner of the performance space, said he and the other owners hope to generate additional income so the location expands as a performance location.

The Church in the Middle of the Block will continue to rent its space to Things Unseen Theatre Company as well as the additional shows planned for the summer.

Coming up in late March will be “Ruthless,” a musical produced by FUSE of State College with Altoona native Katie Kensinger in the lead role.

Then, Cook has again booked a play by his friend Tom Sweitzer, entitled “Sight” to be performed in early August. “Sight” was written in 1999 by Sweitzer but has no obvious Blair County connections unlike “Porches” and “Music and Meatballs.”

Courtesy photos Altoona native Tom Sweitzer, shown above and below, returns to a local stage in “Meatballs and Music” his biographical, one-man show which takes the audience through lessons in healing and forgiveness. The show will be performed at The Church in the Middle of the Block.