Carrying on a holiday tradition: Three local ballet companies will bring ‘The Nutcracker’ to life 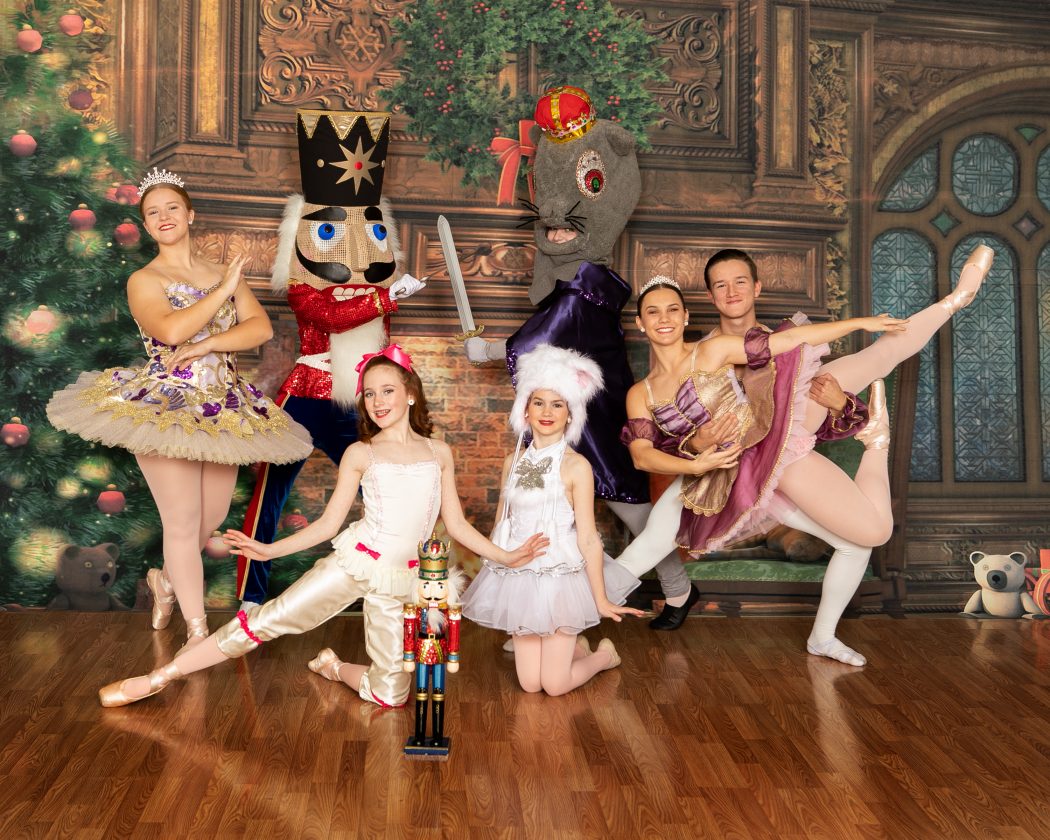 Courtesy photo The cast of Altoona Dance Theatre's "The Nutcracker" are (kneeling, from left): Marah Goff as Clara, Alanna Gartmann as Bunny, (back row, from left): Johnna Estep as Sugar Plum, Connor Bradley as Nutcracker, Madison Adamiak as Mouse King and JJ Estep holding Briana Strayer as Sugar Plum Pas De Deux. The group will perform at 7 p.m. Dec. 14 at the Jaffa Shrine

Three ballet companies — Altoona Dance Theatre Company, Pauline Baker Rodgers School of Dance and the Nittany Ballet will be staging the holiday classic “The Nutcracker” during various performances in December.

n Altoona Dance Theatre Company will present a full-length professional production of Nutcracker at the Jaffa Shrine at 7 p.m. Dec. 14. Tickets on sale now at Copy Rite locations and at the door before the performance.

n Pauline Baker Rodgers School of Dance will present “A Showcase of Dance” at 6 p.m. Dec. 14 and 2 p.m. Dec. 15 at the Mishler Theatre. This presentations features portions of the classic tale.

n The Nittany Ballet presents “a classical version of the holiday tradition,” according to its web site. The Nutcracker, at The Mishler Theatre on Dec, 19 and 20 as well as additional performances at Eisenhower Auditorium on the University Park campus.

The Nutcracker is a family-pleasing classic and appropriate for all ages, said Renee Staines, founder/artistic director, of Altoona Dance Theatre. This company has been performing the full-length, professional version for 15 years. The performance runs 90 minutes.

This year features Johnna Estep as the Sugar Plum Fairy, Brianna Strayer as Sugar Plum Pas de Deux and JJ Estep as the male lead as the Cavalier. In all about 120 people will participate in dancing and non-dancing roles.

Excerpts from “The Nutcracker” comprise the first part of the three-act show. It is the fifth biennial Holiday Showcase, under the director of Mary Ellen Rodgers Everhart.

It is the first year the company will perform an evening performance and a next-day matinee. Her mother will again portray Santa.

This company’s interpretation of the Nutcracker features guest choreography by Fredrick Davis with a special guest performance by Jared Brunson, both of New York City.

“Pauline Baker Rodgers, better known to all as ‘Miss Pauline’ has been dancing on the stage at the Mishler since 1941 when she had several lead roles in Ruth Barnes’ dance recitals. She began teaching for Ruth Barnes in 1960, making this her 60th year of teaching,” said her daughter Everhart. “This year is the first year that I hired a professional choreographer and dancer, both from NYC.”

Emily Liebal, daughter of Mark and Monica Liebal of Roaring Spring, appears in her fourth holiday showcase. “I am really excited about this year’s show as it has been elevated from past performances with additional dances and complexity. I feel honored to be dancing the Sugar Plum feature and am thankful for the opportunity to dance and prepare with the choreographer from New York. He has added some advanced lifts and steps that are challenging and push me to use all of the strength and ability I have.”

Emily is the last among the family’s second-generation of dancers under Miss Pauline. Her mother and aunts were all students and learned not just the “art of dance” but also self-confidence.

“Miss Pauline has taught girls to believe in themselves and to carry themselves gracefully through life, through the good and the bad, through defeats as well as victories,” Monica Liebal said.

“In a world full of negativity, Miss Pauline exhumes positivity and strength and I think the Holiday Showcase will be a testament to that. I am thankful my parents introduced my sisters and I to Miss Pauline at an early age and I believe my three daughters are better, stronger, kinder women thanks to Miss Pauline being a part of their lives. Not to mention they have good posture too … shoulders back, heads up, with a smile on their faces! While we truly enjoyed our dancing lessons, her impact has carried us all well beyond the dance studio!”