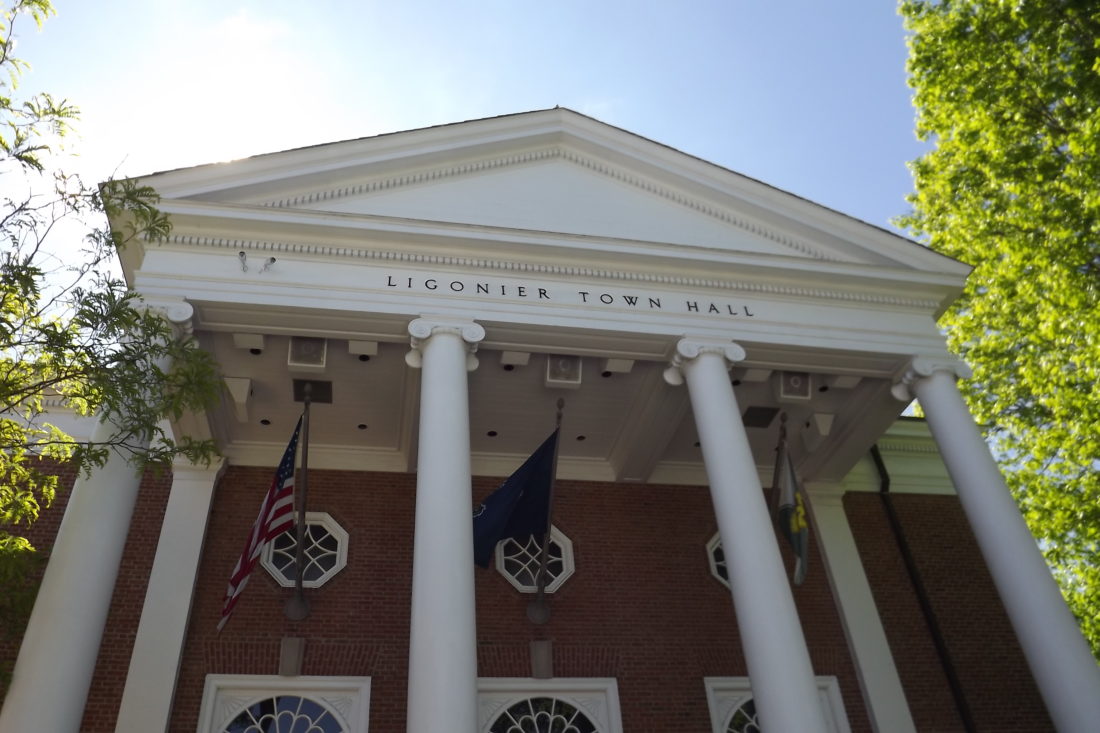 Mirror photo by Cherie Hicks A 1960s building, which has colonial architecture, anchors the Ligonier Diamond -- the center of the town -- and houses the Laurel Highlands Visitors Bureau and Chamber of Commerce.

LIGONIER — Step back into the 18th century where young British officer George Washington feared for his safety more than at any other time of his life.

Spend hours strolling around a picturesque downtown full of more than 60 specialty shops and restaurants.

Or enjoy a day of recreation at a theme and water park, golf course or state park.

Only a 75-minute drive from Altoona, Ligonier is worth visiting for a day or a weekend, and you’ll probably want to keep coming back.

“It is the quintessential, charming American small town,” said Anna Weltz with the Laurel Highlands Visitors Bureau. “It’s a great family getaway or a great romantic getaway. It’s perfect for a day or a weekend.”

Weltz’s office, along with the Chamber of Commerce and others, can be found in the Ligonier Town Hall, a 1960s building that looks older, thanks to its colonial-style architecture. It helps anchor the Ligonier Diamond, or the center of town, where tree-lined Main and Market streets merge at a traffic roundabout that encircles an iconic bandstand in a park setting.

It’s a great place to start a stroll after picking up a visitor’s map and walking guide. If you’re driving in for the day, be sure to park in one of the 24-hour metered parking lots off Market Street; at 25 cents an hour, bring quarters. Parking on the street is restricted to two hours, and an aggressive meter maid will ticket your vehicle if you tarry too long.

Martin’s Specialty Shop is in the shadow of Town Hall and is worth visiting even if you aren’t in the market for men’s and women’s casual clothing and shoes. The 117-year-old shop has been in its current location for 100 years, and the third-generation proprietor, Mary Lou Martin, can often be found here.

“I really think it’s the unique friendliness that brings people here,” Martin said. “It’s a clean, pretty little town and the shops are different; they’re not mall shops, not chain stores. You will see the owners there.”

At her store, you’ll also see the original tin ceiling, old-time hat boxes on display and an oak table made by her grandfather, Robert S. Martin.

Next door is another shop with longevity: the Post and Rail Men’s Shop has been here for more than 40 years. Even if the men’s clothes — or the Vera Bradley products for women — don’t catch your eye, the wooden dog wearing a tie out front will.

Grab a gourmet coffee at Abigail’s Coffeehouse before shopping at The Finishing Touch or Amica gift shop for housewares and unusual presents. If you’re in the market for kids clothing or Native American jewelry and artifacts, there’s a shop for that. And several galleries can satisfy your love of art or artisan crafts (A short drive down Route 711 will take you to the local satellite of the Southern Alleghenies Museum of Art).

At lunchtime, stroll over to the Kitchen on Main where you can get breakfast or lunch from 9 a.m. to 3 p.m. Tuesday through Sunday. For $11, try the scrumptious Crispy Goat Cheese Cakes — they look like crab cakes — on a bed of artichokes, grape tomatoes, roasted red peppers and Kalamata olives, drizzled with basil pesto.

After lunch, you might cross Main Street and step in to Second Chapter Books. It’s home to hundreds of used books that are arranged in no particular order to encourage browsing. You might take your selection to the leather sofa in the back and pour yourself a $1 cup of coffee, or, on a warm day, step out a side door to a flower-draped courtyard and colorful Adirondack chair.

The public library might not be listed as a stop on most tourist guides, but it is here. Anchoring one of the Diamond’s corners is the Ligonier Valley Library, which houses volumes, exhibits, computers for public use and numerous collections on genealogy and local and state history — including books on the French and Indian War.

“We have the best library for a small town,” Martin said. “Out-of-town people are willing to pay to belong to our library.”

Satisfy your sweet tooth at a number of places around the Diamond, including Ligonier Sweet Shop, where truffles, chocolates and other fine candies are for sale. At Ligonier Creamery, the smell of house-made waffle cones might compel you to buy the hand-scooped ice cream or other treat.

Or go two blocks west on Main Street to a historic home now called Thistledown at Seger House. On the first floor is Myriam’s Table, where some locals say the best crepes in town can be found. Across the entryway is Bo Peep Fine Yarns, owned by hand knitter Michelle Gardner.

Gardner and her husband, Adam, bought the 1918 building in 2011 and renovated it into a boutique hotel with eight rooms upstairs and a ninth, a suite, out back in the carriage house.

Originally the home of coal baron John Seger, the dwelling features original stained-glass windows and rich wood accents. It was a hospital from 1943 until 2011, when the Gardners bought it because the price kept falling and they couldn’t stand the idea of a beautiful building standing vacant.

The renovation used existing materials and period reproductions to create a rich, upscale feel with modern amenities. Rooms start at $150 a night and include breakfast from Myriam’s.

Another quaint place to stay is the Campbell House Bed and Breakfast in a 150-year-old cottage on East Main Street.

While small towns have a reputation for a dull nightlife, Ligonier may be an exception. The Ligonier Tavern offers food, spirits and regular entertainment in the Victorian-style home built in 1895. The Wicked Googly is a restaurant and bar known for its rotating craft beer selections. Located inside Ligonier Lanes, you can always bowl a game with family or friends.

To get a complete story on Ligonier origins, check out its namesake fort just two blocks south of the Diamond.

The fort museum just underwent a major renovation and expansion and re-opened last month. New exhibits will be installed later in the summer, but “we feel strongly that there is plenty to see now,” Donovan said.

In the new Washington Gallery, you can read Washington’s memoirs that describe his closest brush with death that took place “not during more storied events of the American Revolution,” she said. It was on a nearby hillside on a foggy November 1758 day in an incident called “Friendly Fire” that very nearly killed Washington.

An art gallery includes original paintings, such as an early portrait of a young Washington by Rembrandt Peale, while a history gallery includes British red coats and an explanation of their symbols of rank, and other artifacts.

The reconstructed fort spreads out over eight acres of the original site that existed for only eight years, starting in 1758.

“It was only supposed to last for three months,” said Matt Gault, assistant director of education.

Originally called the Post of Loyalhanna after the nearby stream, the fort was built to protect supplies, tools and food for 5,000 British troops moving west toward the French garrison at Fort Duquesne, a pivotal post to the western frontier at present-day Pittsburgh.

You can walk around and through rebuilt retrenchment walls, sentry boxes, storehouses and officers’ quarters, and an underground magazine where gunpowder was stored. If you’re lucky, you might find Brad Mooney working on a cannon, wagon or other prop in the reconstructed fort; the independent contractor has worked for 30 years here to ensure items are built to historically accurate standards.

Tours currently are self-guided, but Gault said a docent program is growing so check the website at www.FortLigonier.org for scheduled guided tours. Donovan said the moderate walk to the fort is slightly uphill; assistance can be provided with advance notice. Admission is $6 to $10, with discounts for students and senior citizens.

For more history on the area, check out Compass Inn Museum and the Ligonier Valley Railroad Museum, which are only short drives down Route 30.

Compass Inn is a restored 1799 stagecoach stop that hosted travelers from Philadelphia to Pittsburgh. The original Inn was constructed of logs, and a stone wing was added in 1820. It has been completely restored and is furnished with period pieces.

Opened in 2010, the Ligonier Valley Railroad Museum is housed in an original rail station built about 1896. You can learn here how the railroad, founded by Judge Thomas Mellon, hauled passengers from 1877 until 1952.

Less than a half-mile from the railroad museum is Idlewild, a popular amusement park for children, but fun for the entire family, especially with its 18 major rides and the SoakZone water park, said Jeff Croushore, Idlewild’s director of marketing.

“At Idlewild, you won’t find mega-thrill rides that lay claim to being the tallest or fastest, but instead simpler fare that the entire family can enjoy together,” Croushore said, noting that the park opens Memorial Day weekend.

Daniel Tiger’s Neighborhood is a life-sized trolley ride through the popular wonderland made famous on the PBS KIDS television series of the same name. A stroll through Story Book Forest takes visitors on a winding path through a woodland with cottages and other character scenes from fairy tales and nursery rhymes, from Mother Goose to Goldilocks.

“The lines aren’t long and you don’t have to spend a fortune,” Croushore promised, with day passes starting at $44 and discounts available online at www.Idlewild.com.

Another popular recreational opportunity is Linn Run State Park, 6 1/2 miles down Route 711 from Ligonier, with a trout stream, great waterfalls and hiking trails. And, several golf courses are close, including the “super exclusive” and private Rolling Rock club and the Champion Lakes course that is open to the public, said Weltz.

With so much to do in such a small area, the biggest problem may be figuring out when to visit. Timing it with one of the town’s 15 annual events that celebrate music, the holidays and history may make the visit even more fun.