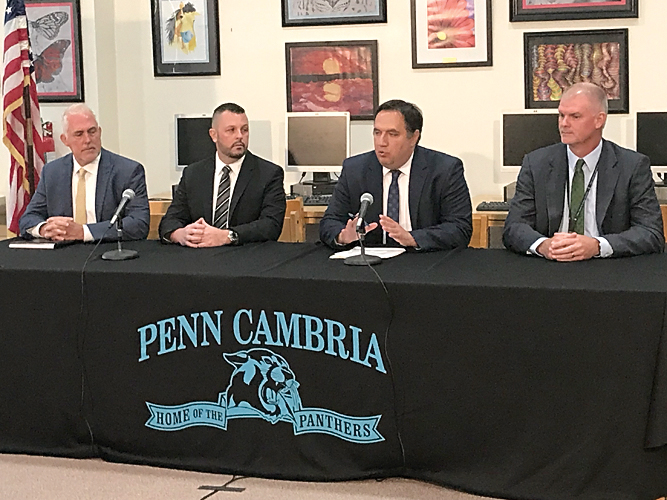 An area lawmaker plans to redouble his efforts to hold parents accountable with fines or community service for their child’s repeated bullying.

Rep. Frank Burns, D-Johnstown, is bringing back his proposal, which failed to win approval last year. If a child bullies three or more times within the same school year, the school would file a citation against the parents in district court. Potential penalties could include a fine of up to $750 and or community service.

Burns’ measure would establish a three-tiered system. For the first verified bullying incident, parents would be notified. The second time, the bullying child’s parents would be required to take a parental class on bullying and would be invited to a bullying resolution conference to develop a plan that lays out what the student, parents and school will do to prevent further incidents.

If bullying continues a third time in a year, parents would face fines or community service.

There’s nothing new in the bill, but things have changed since last year — namely, 3,500 calls about bullying were made to the Safe2Say program from January to June.

Before the Safe2Say program, bullying was underreported. Burns said that during the 2017-18 school there were only five incidents of bullying reported among all Cambria County school districts, according to the most recent data available from the Department of Education.

“It’s ludicrous to believe that more than 16,000 students across a dozen school districts only encountered five acts of bullying,” Burns stated in a memorandum asking for legislative support for his bill.

In a separate proposal, Burns aims to continue building on the state’s Safe2Say program.

He calls his second proposal, a “Pennsylvania Anti-Bullying Bill of Rights.” It will define parents’ right to know if their child is involved in bullying and receive regular updates about investigations.

The proposal would also require districts to more thoroughly track and investigate incidents of bullying and report meaningful statistics to the Department of Education.

Burns isn’t waiting for the General Assembly to move on that legislation; he’s partnering with the Johnstown-based software company HIBster (Harassment, Intimidation and Bullying) to show how easy it can be for schools to track bullying data.

The HIBster program is already in use at hundreds of New Jersey schools, as well as the Philadelphia and Erie school districts, Burns said. And now, Penn Cambria in Cresson.

The company’s software not only determines what types of bullying incidents are occurring, it also helps administrators handle the investigations, prepares reports for parents of bullies and allows anonymous complaints to be sent to a designated school staff member.

With HIBster, Burns created a pilot program in which Penn Cambria School District in Cresson will aggressively track, analyze and report bullying using the HIBster software, provided free of charge for a year by the company.

After this year, the district will decide if software is valuable enough to continue with purchasing it.

Burns said the legislation he proposes would not mandate the purchase of the software, but districts would have to track bullying incidents some other way.

“Safe2Say was great. It created an environment where reporting was made easy when needed. A lot of things reported was bullying. Now with the addition of HIBster to collect those reports, we can identify hot spots in buildings; we can pinpoint where to intensify surveillance videos or increase staff supervision.”

Marshall said the software makes organizing discipline referrals easy. HIBster aggregates discipline data of the the district’s current student information system to better show patterns of bullying on the part of individuals as well as schools as a whole.

With HIBster’s program, administrators can look up a name and a report comes up.

“It tracks data. And it is perpetual. If John Doe was accused of bullying in the cafeteria, you can see if he has had reports in the past and the same for victims,” Marshall said.

Marshall foresees the reports generated by the program will help eliminate the “he-said, she-said” that makes bullying murky.

“We can really identify students who are victims and actors and hotspots where bullying happens,” he said

“The tough thing with bullying is bullies are good at hiding it. But if we have a report showing a student is accused three times in semester, that is a good indication, and the student is aware that we are aware of it.”

In both bills, Burns would include an enhanced definition of bullying that better differentiates between joking or teasing and true bullying and includes retaliation for reporting bullying as an act of bullying itself.

Neither of the bills Burns proposes have been drafted.