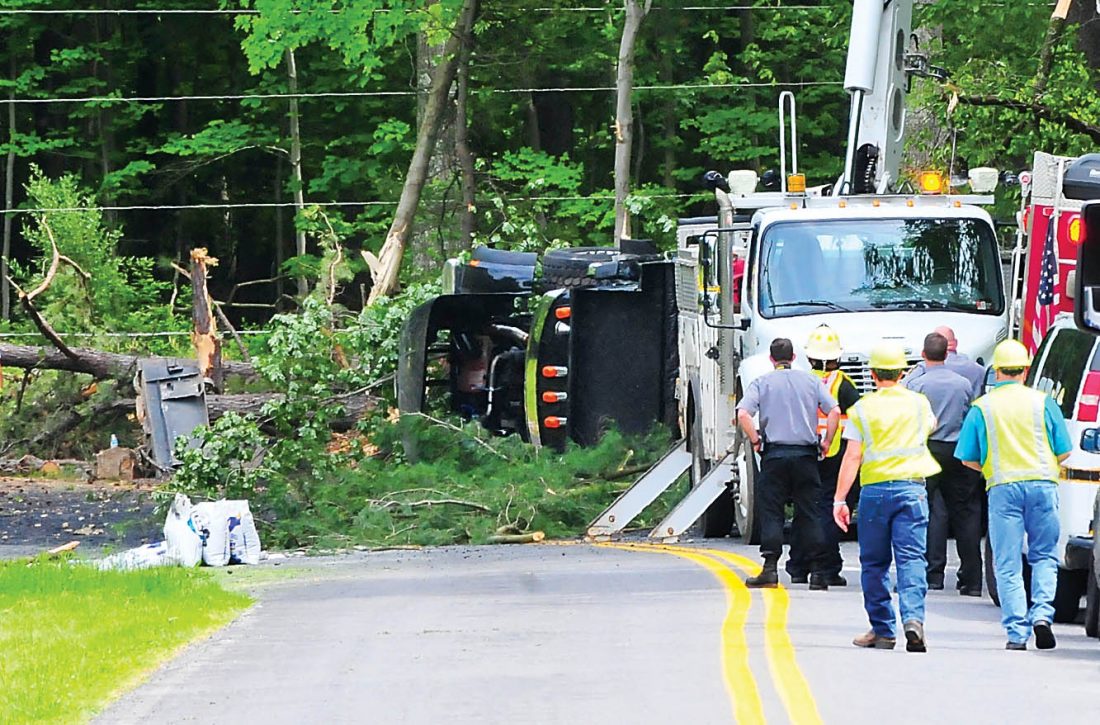 Emergency and utility crews work to cut trees and remove the crashed truck and other debris to clear Locke Mountain Road after the fatal crash on Wednesday afternoon. / Mirror photo by Greg Bock

HOLLIDAYSBURG — A crash Wednesday afternoon killed the 40-year-old driver of a truck and closed down Locke Mountain Road in Frankstown Township for hours.

State police are investigating and the Blair County coroner was called to the scene, although no additional information about the deceased driver was available Wednesday night.

It was about 12:30 p.m. when Josh Rodriguez heard the crash as he smoked a cigarette on his porch on the 1600 block of Locke Moun­tain Road.

Rodriguez said that the thought no sooner crossed his mind when he heard the unmistakable sound of a crash.

“You could hear the trees cracking, he took out the telephone poles, and then the bang when it hit the pavement,” Rodriguez said, describing the sound of metal “scraping and sliding” along the road when the truck turned on its side.

Rodriguez rushed to the scene, which was just up the hill from the road’s intersection with West Loop Road. Rodriguez said it appeared that multiple utility poles and numerous trees were taken out by the truck, which had overturned.

Rodriguez said the cab of the truck, which he said was a Peterbilt 379 tri-axle, was empty and after a frantic search of the surrounding woods by several people who were in vehicles ahead and behind the truck, the driver was found pinned beneath the overturned truck by a bystander who had been mowing a nearby lawn.

“He was hauling what appeared to be millings (from a road) in the back of the truck and he had a trailer — a double axle trailer — with a skid steer, a paver, numerous attachments for the skid steer and other miscellaneous stuff,” Rodriguez said of what he saw, adding that all the equipment was thrown off the trailer in the crash.

The crash closed Locke Mountain Road at West Loop Road for hours as service crews, emergency personnel and state police worked to cut trees and remove the truck, its equipment and other debris to clear the steep, mountain road just below the crash site.