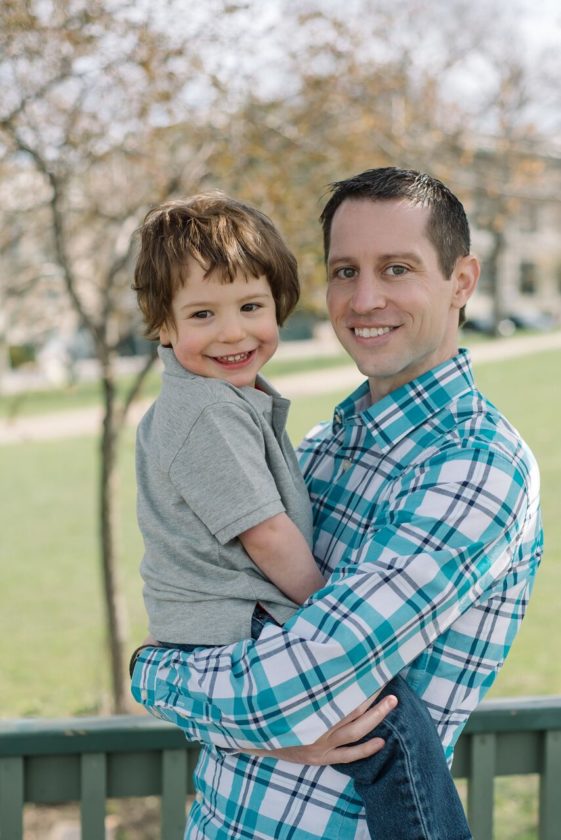 Courtesy photo Scott Sutton, a Chest Springs native, holds his son, Alec. Scott has authored a book that is meant to be a constant reminder to Alec that he is loved by his Dad, who is battling stage-four cancer.

Fatherhood, illness and friendship have led to an unlikely culmination for a man with roots in Cambria County.

Scott Sutton, a Chest Springs native, has authored a children’s book for his 3-year-old son, Alec.

The book is meant to be a constant reminder to Alec that he is loved by Scott, who is battling stage-four cancer.

“This book started out being something I could give to my son,” 36-year-old Scott said. “Something he’d always remember me by. But now it also means so much to see so many families reading with their kids and getting so much enjoyment out of the story.”

Earlier this month, Scott told his story, answering a series of of questions by email from his room at UPMC Shadyside Hospital in Pittsburgh.

“I’d say I was a typical Cambria County kid,” Scott said. “I was running around with friends outside or in the woods when I could. I played Little League.”

It was in Cambria County — during his middle school years — that Scott met his wife, Anne (Stoltz) Sutton, when they both attended a gathering at a mutual friend’s house.

Anne was a student at Cambria Heights, and Scott was at Penn Cambria.

But their romance wouldn’t begin until years later when they reunited at the same mutual friend’s wedding in 2011, Scott said.

“We were just split between school district lines,” he said.

By 2013, the couple were engaged and the following year they were married in a Valentine’s Day ceremony.

Alec was born a year later. However, his name has roots in Scott’s past.

Scott’s son is named after his best friend, a man named Alec Traub.

Scott and Traub, a California native, were both members of the Phi Kappa Psi fraternity, but at different colleges. Scott attended Lycoming College in Williamsport and Traub attended the University of California-Irvine.

But after graduation, both went on to work for their fraternity’s national headquarter’s in Indianapolis. From there, they would often travel as a pair, visiting fraternity chapters across the country, Scott said.

Last week, Traub spoke over the phone, remembering the start of his relationship with Scott.

“We just connected and really just got along from the start,” he said. “We spent so much time together.”

That time together fostered a lasting friendship, Traub said.

“We got so much closer than you normally get to somebody you just work with,” he said. “For us, it was really kind of a constant thing.”

The friends met about 15 years ago, but both eventually left their fraternity jobs and moved back to their respective sides of the country — Traub to California and Scott to Pennsylvania.

The hundreds of miles between them was not enough to end their friendship, however. Call, texts and emails kept the friends connected, Scott said.

“It was easy to make him a priority to keep in touch with,” Scott said, explaining their conversations continue.

“He’s a good friend,” Scott said. “He came to visit last month and drove me to some radiation appointments.”

Those appointments are necessary as Scott battles stage-four cancer, which has produced tumors throughout his body, including his liver, brain and bones.

“Staying strong through this entire diagnosis has honestly been easy for me,” Scott said, thanking his friends, family members and even strangers who have supported him. “I have so many great things in my life that are worth living for. Incredible family and supportive friends. There’s a lot of things left to do with these people.”

That includes 3-year-old Alec Sutton. For him, Scott and Alec Traub authored the book “I Love You Like …”

In those texts and emails that kept Scott and Traub in touch, they would often exchange messages that began with the words, “I miss you like.” The phrase would be followed with a silly quip.

Those quips led to the idea to write a book, and the word “miss” was changed to “love,” Scott said.

The book, which Scott and Traub self-published, is illustrated by Glenn Zimmerman, who is best known for his work drawing the famous orange cat Garfield.

Scott and Traub’s story is told with cartoon caterpillars — a father and son.

The son asks the father, “How much do you love me?” And the father answers, using some of the same quips Scott and Traub used to exchange.

Traub recalled working to make the book a reality.

“For us, it’s been an exciting type of thing to work on amid the kind of bad thing going on with Scott,” Traub said. “It’s something that crosses between my friendship with Scott and Scott’s relationship with his son.

“It’s bittersweet in that it’s been something really fun for us to work on. It’s brought us even closer,” Traub continued. “Hopefully, Scott’s health improves and he will be with us for a long time.”

When Scott wrote the email, answering the questions from his Pittsburgh hospital room, he was waiting to be released from UPMC Shadyside’s intensive care unit.

A copy of Scott and Traub’s book was sent to the Mirror office. Behind the cover, a message is written for Scott’s 3-year-old son.

“For my son, Alec Sutton, who makes every day an adventure,” it reads.