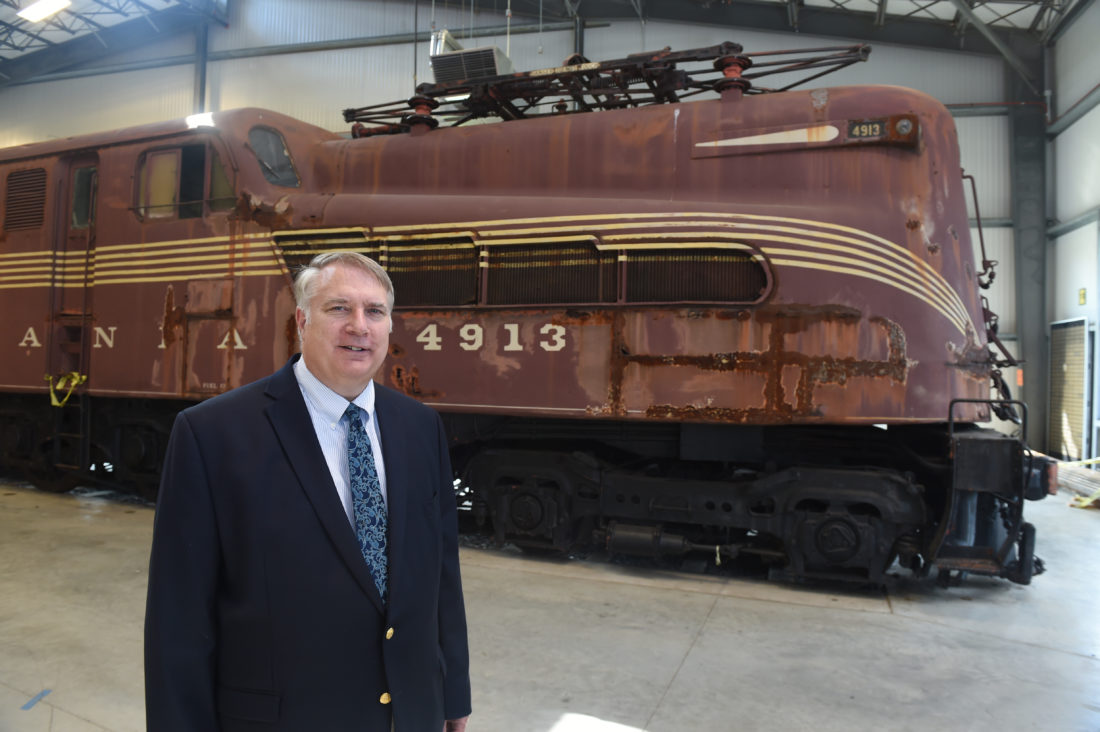 Courtesy photo Author John Wall is shown by the Pennsylvania Railroads’ GG-1 locomotive on display at the Railroaders Memorial Museum in Altoona.

While Loewy may not be known by name, the products he designed are recognizable — such as the Lucky Strike cigarette packaging as well as Air Force One used by presidents since the 1960s. For local railroad history buffs, Loewy created a new era in steam and electric locomotives.

Johns Hopkins University Press published “Streamliner: Raymond Loewy and Image-making in the Age of American Industrial Design,” and it is now available on Amazon and from Johns Hopkins for $39.95.

Wall, 61, relocated to Altoona in 1987 to work at the Mirror as a movie critic and writer. In 1994, he moved into public relations at Penn State University, then Juniata College from which he retired in 2016.

“It’s a legacy for me,” Wall of Altoona said. “As a journalist no one pays attention to bylines and as a public relations person, you are even more anonymous and hidden, … The book is published and hopefully I’ve made a lasting contribution to the history of consumer culture and industrial design. I am really happy I’ve been able to do this. It’s helped me maintain the creative spark most writers need to complete such a big project.”

Previously, Wall worked at the Toledo-Blade in Ohio, Insight Magazine in Washington, D.C., and at Stars and Stripes in Tokyo.

Wall has long been interested in design as it relates to consumer culture, starting when he covered the advertising industry as a reporter for Insight, a weekly newsmagazine. Loewy, who was there at the birth of industrial design, was a natural topic for Wall’s book which traces how the famous designer influenced consumer products for decades and also established a template for creating a public persona.

While writing for the Mirror, Wall said, he honed his writing and became adept at long-form magazine-length, feature stories. One such assignment lingered — an extended feature on the largest steam locomotive — called the S-1 — which Loewy designed and local men built at the Pennsylvania Railroad’s Juniata shops.

“When writing that story, in the back of my mind, I thought his life story was interesting,” Wall said. “Loewy really created the template for what we call ‘personal branding’ today.”

Loewy died in 1986 at age 92, and Wall said, his influence lingers as he is referred to as the “Father of Industrial Design.”

Juniata College history professor James Tuten said industrial design had been populated by “hard-working but anonymous creatives in today’s parlance. Though his talent of inventing the look of iconic post-war pieces of Americana from the Coca Cola vending machine to the paint job on Air Force One, Loewy catapulted the designer into the front ranks of creative professionals.”

However, Tuten added, “it’s difficult to say whether he is more regarded now. We tend to have a bit of historical amnesia about anything but the very recent past. Still, Loewy did not suffer from a lack of attention in his day. He even graced the cover of Time magazine.”

Impressive especially for a trained electrical engineer whose career began as a fashion illustrator after moving to the U.S. from France in 1919.

Loewy moved to the United States after losing his parents in the 1918 Spanish Flu epidemic, where he used his artistic talent to follow his passion — transportation-related design. Known as “the streamline king” for his futuristic designs — the Hupmobile and the Avanti automobiles, Coldspot appliances, tractors for International Harvester and logo designs for IH, Shell Oil and Exxon. His final designs were for Skylab, the NASA-sponsored “space station” of the 1970s.

“He was ahead of his time in many ways as he understood why people buy different products and designed for a wide appeal,” Wall said, as Loewy improved and married form, function and user experience/interaction when designing.

His tenure at the PRR began in 1932 when he designed a trash can for the New York City’s Penn Station. Loewy then submitted unsolicited designs for steam locomotives that prompted more commissions. He went on to design the PRR’s GG-1 locomotive, which can be seen at the Railroaders Memorial Museum, the S-1, the largest steam locomotive ever built, and the T-1, another streamlined engine.

Wall worked at Penn State University Park from 1994 to 2000 and it was during this time that he compiled much of the early research for the book, Wall availed himself of Penn State’s extensive research holdings and then-professor Stan Weintraub, who has written more than 20 nonfiction books and many biographies.

Wall had thought about obtaining a master’s degree — which would have been a useful resume-builder for a career in higher education — using Loewy as his thesis. Instead, Weintraub advised Wall go straight to writing the book and provided expert guidance into the publication world.

“John kept at it and never gave up,” said his wife Sharon Wall, a retired high school art instructor.

“He had a vision and despite many obstacles he stayed persistent,” she said. As a teacher, perseverance is something I appreciate and encouraged my students to develop.”

Wall said his wife and daughter, Colleen, showed great patience as he wrote and researched the book during his workday evenings. The long process of publication was particularly adventurous as Wall wrote and polished the manuscript many times as the book bounced between editors at a different publishing house before landing — for good.

“Johns Hopkins University Press,” Tuten said, “enjoys a sterling reputation especially for its attention to cultural history. Wall’s book fits well in that cultural history vein even as it keeps a foot planted in the history of business.”

Wall is available to speak about his experiences in book publishing and for book signings. Contact him at his website johnwallauthor.com

Stanley Weintraub, now in his 90s, explained the appeal of John Wall’s book:

“I was especially intrigued by Loewy’s interest in locomotive design, as in the middle 1930s, when I was a kid, my family (I was the eldest of three) would travel several times a year to visit my father’s mother in New York. Highway travel was then a big deal. That meant my father’s checking the air in the car’s tires, also the oil gauge, and filling the gas tank before chancing the 90-odd miles from Philadelphia to the Bronx. As he was about to ready the Pontiac, he read a newspaper story about an ultra-modern locomotive going into service. He changed plans. We would take the train.

“Early in 1935 the new General Electric GG-1 was at the platform. As soon as we boarded, Dad took me and my brother, Herb, then nearly 3, to the front of the train and asked for permission to explore the new locomotive. Happily, in that different, unthreatening world, we saw the dials go round and heard the engine throb. On board one of the first runs of the Art Deco-styled streamliner, we watched excitedly as GG-1 set a new speed record to Pennsylvania Station.

“The memory came back, as if it were yesterday, when I turned John Wall’s pages on Loewy, who pioneered the streamlining of almost everything in our young lives.”