BTN continues to pay off for PSU

A home hockey game against Notre Dame (6 p.m.) starts the evening and a wrestling match at top-ranked Iowa (9 p.m.) completes the doubleheader.

Sure, football drives BTN — the popularity of that sports accounts for much of the Big Ten Conference’s overall television revenues, some $54 million every year, to member schools — but nights like Friday reflect the promise of the conference network come to life.

Few besides then-commissioner Jim Delany probably envisioned a night with hockey and wrestling as the primary programming when BTN launched in 2007.

In the first few years of its existence, BTN and its school partners spent a lot of money and time lobbying for the cable network to be added by cable providers. It was hard work bringing Delany’s dream to life.

It’s much more than a dream these days.

BTN became the model for other conference (ACC, SEC) and school channels (The Longhorn Network). Plus, technology made the timing even more prescient.

With online and streaming options, BTN produces more content — live action as well as documentaries, studio programs and more — than ever these days.

This week’s Penn State doubleheader comes with something else special, standout studio audiences. After all, that’s what fans in attendance have become — a backdrop for the shows.

Pegula Ice Arena should provide that for the hockey game against Notre Dame. With the reliably loud student section, a name opponent and a meaningful matchup in the conference standings, the action should translate well to TV.

Likewise, the Penn State-Iowa wrestling match ranks as one of the biggest of the season in the country, let alone the conference. And fans at Carver Hawkeye Arena also reliably provide atmosphere. They’re knowledgeable and passionate. It should be good TV.

Color commentator Tony Romo ranks as the biggest off-the-field free agent in football, but speculation and stories about whether he’ll leave CBS Sports, perhaps for ESPN, seem a bit misplaced.

More accurately, they seem like a job well done by his agent to stoke interest.

Romo has been different, insightful and strong during his fledgling on-air career, but it’s hard to fathom his move to another network impacting that network’s ratings for its NFL games.

Nobody watches games because of the broadcasters — nobody. It’s a myth that gets perpetuated by the insular media the covers such things.

Broadcasters working on a network’s top on-air team only get attention because they’re working one of the week’s most-viewed games. Those games attract because of the action on the field, not the people in the booth.

It’s hard to imagine Romo leaving CBS, where he seems to have a comfort level with Jim Nantz as well as abundant attention and respect. Sure, he might get a raise, but it’s unlikely his presence would attract more sponsor dollars or viewers for ESPN on Monday Night Football.

That said, ESPN might be able to monetize Romo and provide options through ESPN+ and content that lives on an outlet for which it can charge an additional premium, similar to what it did this past year with Peyton Manning.

The NCAA Tournament is so powerful that everything about men’s basketball revolves around it. Everything.

While the victory put Penn State at 4-4 in conference, they wondered aloud about the team earning a five seed in the tournament and reaching 15 victories in conference play.

It’s exciting speculation, even if it seems early. It’s appropriate, though, because the only thing that matters about the sport seems to be the NCAA Tournament, and Penn State is better positioned to make it than it has been in years.

n Watch for what’s not on the mat during the Penn State-Iowa wrestling match Friday. That would be some lingering student wandering around at the end of each period to tell the second official how much time remains. Iowa knows what it’s doing and apparently has a scoreboard buzzer loud enough for the officials to hear. Unfortunately, that’s not the case at Penn State home meets, because there’s always a booster club student filling that seemingly extraneous role. It’s a bad, low-budget look for one of the best, high-profile programs in the country, and it seems like it could be easily avoided.

n The Pro Bowl kicks off at 3 p.m. Sunday, airing on both ABC and ESPN. It might be the least interesting all-star game in pro sports, but the lure of the NFL (along with some good access and interesting rules changes) means it often draws better ratings than other all-star games.

n Man, some tough timing for Kansas basketball, huh? Just days after the ugly Kansas State-Kansas brawl, ESPN’s College GameDay visited the Jayhawks’ home court Saturday. So there was no way for the incident to avoid the glare of the national spotlight.

Sampsell comments on the broadcast media for the Mirror. He can be reached at stevesampsell@gmail.com.

Giger: Sports may not return to normal for rest of year

This. Stinks. What we’re going through in this country because of the coronavirus is terrible, for tens of ...

Pearl Washington’s shot changed my life, and I have no idea why

Today would have been the start of the magical two-day extravaganza of the first round of NCAA Tournament, the ...

No ‘Mania’ for this fan of wrestling

I’m never quite sure whether professional wrestling stories belong in the sports or lifestyle section of the ... 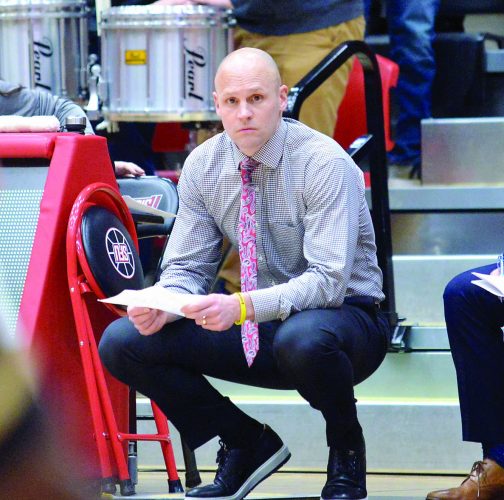 How to Flash forward: SFU will face future challenges

Friday’s announcement by several school districts that spring sports will not take place until at least April was ...