Sports gives much thanks for service

A pastor friend recently provided opening remarks at a business meeting I attended, using the opportunity to remind us the month of November should be spent in giving thanks.

The traditional holiday of turkey and football first came to mind: the heat of the oven warming the kitchen; the television blaring the gridiron games of the day; family playing a pick-up game of football in the backyard.

However, the pastor, a former Air Force mechanic and military chaplain, began his thanks with the November observance of Veteran’s Day, and showing gratitude to those who have served in the US Armed Forces.

Observances of the holiday took place around in the form of pre-game ceremonies in many athletic arenas, including that of the Pittsburgh Steelers, who invited service men and women on the field for a star-spangled tribute.

The honors included one of their own, offensive tackle Alejandro Villanueva, who served as an Army Ranger during three tours in Afghanistan, earning the Bronze Star Medal for Valor.

The images were similar around the nation, on and off the football field.

NASCAR has been all-in on veteran-themed celebrations for many years; with red, white and blue celebrations throughout their competition season. This November, the sport shined a special spotlight on Truck Series driver, Jesse Iwui, a Naval Academy graduate and officer in the Navy Reserves who champions the armed forces both on and off the track.

Military tributes in sports extend far beyond the November observances. Baseball, basketball, soccer and other programs from high schools to the pros celebrate service with camo uniforms, appreciation nights, and even fundraising efforts to benefit military families.

While the patriotism was at its height in the aftermath of 9/11 nearly two decades ago, many elements of the observances have been etched into the tradition of American sports: flags fireworks and flyovers, just to name a few.

The similarities between sports and the military are hard to ignore, which is why so many of those who serve in the armed forces have some athletic experience, usually on an amateur level. Both teach focus and discipline; both require teamwork and commitment to others; both require those who wear the uniform to overcome adversity.

Our military and our sports are woven into our nation’s personality, and today, the two converge more often than ever with made-for-TV patriotic pageantry, next month’s Army-Navy game perhaps one of the most obvious examples.

But as we sincerely pause to remember those who have served, home and abroad, in wartime and in peace, we know the very real difference in the wins and the losses, the heartbreaking sacrifices and the incredible service.

Sports provide an important platform to honor and celebrate that service. For all who have worn the uniforms of our nation, on Veteran’s Day and every day… thank you.

Kellie Goodman Shaffer can be reached at kellie@bedfordcountychamber.org. Her column appears on Tuesdays. 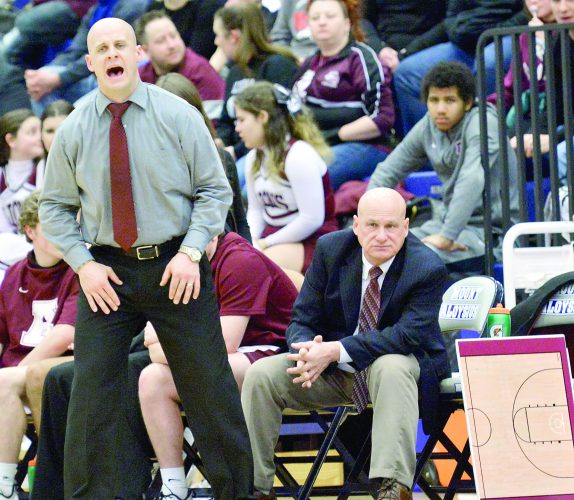 Chip off the old block: Klausman pilots Lions with dad on journey

(This column was published Saturday and updated with the latest AP ranking today.) There’s never been a Penn ...

Colleges around the country wrapped up their football signing classes this week, proudly touting scores of ...

What a week it was. Sports headlines should have been dominated by preparations for the Super Bowl, but instead, ...

Perhaps the most interesting boys basketball game of the season in Blair County is set to be played Monday ...

He’s seen it all in KC: Altoona native Moore part of Chiefs’ lore

Bob Moore’s cell phone has been blowing up lately. That’s what happens when you work for a team set to play ...