Bison have too much offense for BC 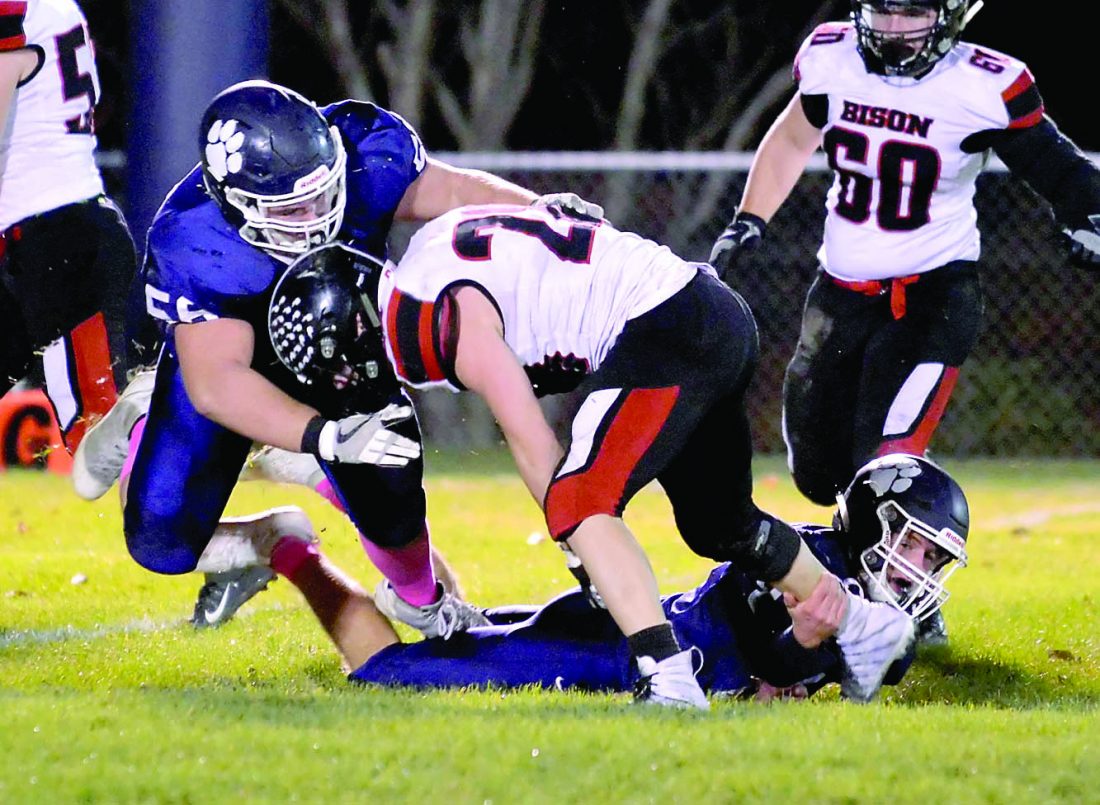 EBENSBURG — After forfeiting last week due to a lack of players, Bishop Carroll returned to its home field Friday to host Clearfield.

The home crowd cheered for the 10 seniors who were honored before the game, but had little to cheer after that.

Jake Zazvrskey scored late in the first quarter on a 2-yard run to cut the Bison lead to six points after one quarter. However, Clearfield scored 30 unanswered points in the second quarter to end the Huskies season with a 51-14 road victory.

Plays of the game: BC trailed 21-8 early in the second quarter. On its previous possession, Bishop Carroll scored a touchdown that cut the deficit to 14-8. A bad snap on first down pushed the ball back inside the 20. After a penalty moved the ball back another 5 yards, Zazvrskey scrambled trying to avoid the Bison pass rush. However, he was tackled in the end zone for a safety. In addition to giving up the safety, Clearfield got the ball back on a free kick. It scored a touchdown on a 49-yard pass on the next play as part of a 30-point second quarter that put the game out of reach for the Huskies.

Player of the game: Clearfield senior running back Brett Zattoni carried the ball 11 times for 133 yards and three touchdowns in just over a half of work. Zattoni had touchdown runs of 16, 26, and 5 yards, which gave the Bison an early 21-0 lead. His running gave Clearfield the momentum it needed.

Unsung hero: The Bishop Carroll football team, especially the seniors. Philip Woo, who served as the Huskies interim coach in place of Sean Billings, who stepped down earlier in the week, was especially proud of his team. “We have a really great bunch of seniors,” Wood said. “These 10 guys who are graduating are going to be sorely missed. They worked really hard. They went through a tough experience this past season, and even though we didn’t win a lot of football games, they learned a lot of life lessons. I think it will help them in their future. That’s what we were trying to emphasize.”

Most vital statistic: Bishop Carroll was held to 26 yards on 29 carries. The Huskies struggled with the size and the number of players available to Clearfield, as the Bison controlled the line of scrimmage on both sides of the ball. Clearfield averaged almost 6 yards per carry behind their offensive line, netting 243 yards on 41 carries.

Clearfield coach Tim Janocko: “I want to congratulate Bishop Carroll. Their kids really played hard. We were tested in the first quarter, and they played hard throughout the whole game. They did a nice job. I want to thank them for playing the game, and for playing as hard as they did.”

Woo: “These kids went through a lot this year. I was glad that they stuck together and finished their last game. Unfortunately, it wasn’t what we expected.”

Bishop Carroll senior Jake Zazvrskey: “We were happy to be able to play. We were looking for numbers all week, and then we got numbers. It was nice, so it didn’t have to end on the Penns Valley game, since we didn’t know that was going to be our last game. It was nice coming out tonight. Playing football got me some really good friends that I will never lose, and the coaches taught me everything I need to know.”

Next week: Clearfield plays Juniata in the district playoffs. Bishop Carroll’s season is over.