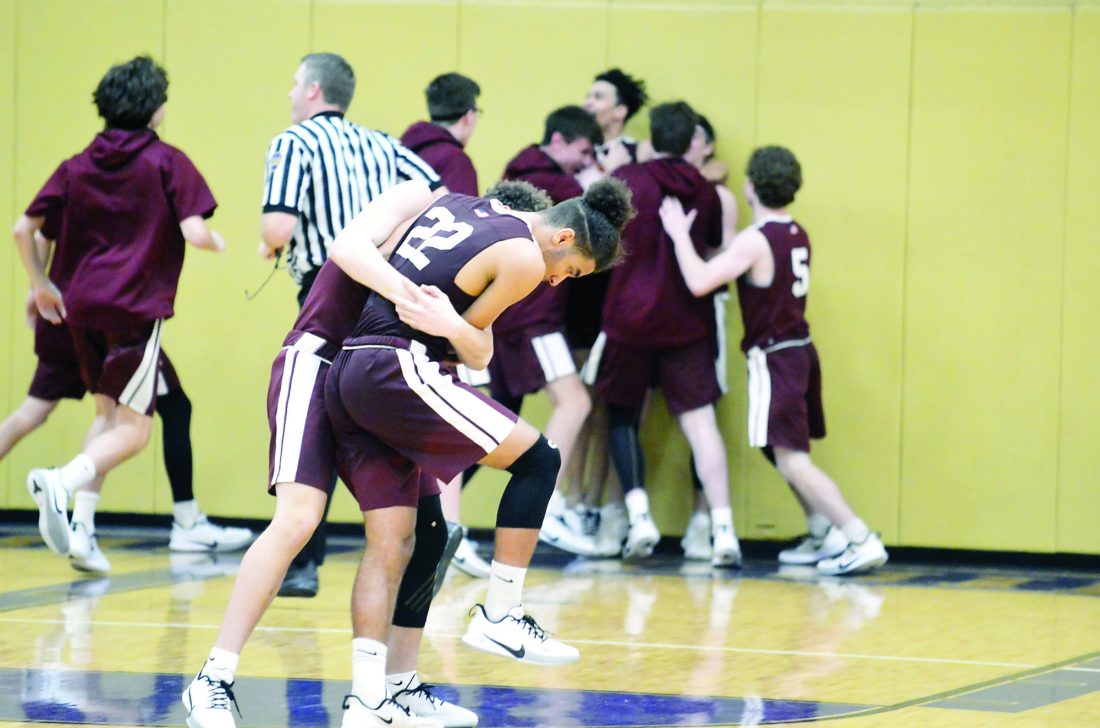 The debate on where the Bishop Guilfoyle Catholic and Altoona boys basketball teams should have played was the story coming into Monday’s game at Pleasant Valley Gymnasium.

The question after it was, when can they play again?

The Mountain Lions and Marauders put on an instant classic that ended with a 64-63 Altoona win after Michael Montecalvo’s layup in the final seconds rolled off the rim just before the buzzer.

“I felt about four or five emotions in about two seconds,” Altoona coach Jarrod Klausman said. “It was so loud in there. I was trying to tell them we still had a foul to give, and I was trying to get that call out there as (Montecalvo) was driving to go for the ball and foul with three or four seconds left to make them take the ball out of bounds again.

“I didn’t get the call in, but Jeremiah (Crockett) did a good job defending the ball to the basket. When it went up, from my angle, I thought it was going in, but to see it rim out, I just felt pure excitement for my kids and for me. We have been playing really good basketball for weeks and coming up just short, and to play a great team in their place and come out on top this time was so good for us.”

Altoona has been on the other side of game-winning baskets all season. The Mountain Lions went 6-10 in the Mid-Penn Conference but could have easily had that record flipped.

“We could be one of the top teams in the conference,” Altoona senior Caleb Pierce said. “I know our record in the conference isn’t great, but most of the games, like seven or eight of them, were within just a couple points.”

It was Pierce who starred for most of Monday night.

After not scoring in a first quarter that Bishop Guilfoyle carried, 20-11, Pierce scored 16 points in the second quarter alone and helped Altoona turn that deficit into a seven-point lead.

The Marauders fought back and scored the final seven points of the half, the final three coming on a trey by Luke Adams in front of the Altoona student section.

With 7:05 to play in the game and Altoona up by three, he fell to the floor after some contact under the rim and was taken off the court. Montecalvo, who led BG with 22 points, tied the game on a 3-pointer with 3:05 left.

That was when Pierce, who also scored 22 points, checked back into the game and drilled a 3-pointer to put Altoona ahead for good.

“I got poked in the eye, and I could barely see,” Pierce said. “I couldn’t really see even when I got back in, but I have been shooting a long time. My brother and my dad have helped me with that, shooting with the same form. I saw a little bit of the rim, did my follow through, and it went in.”

The Marauders got three possessions in the final minute down by one point with a chance to go ahead.

Montecalvo had a great look at a 3-pointer with 20 seconds left that just rimmed out. After a missed Mountain Lions’ free throw, Crockett came up with a steal but missed his free throw. That led to the final possesion of the game.

“I looked up with about seven seconds left and thought about calling a timeout, but Michael had the ball going downhill,” Bishop Guilfoyle coach Chris Drenning said. “He went to the rim and missed, and that’s the way it goes. It was the look we wanted, and he’s beating himself up, but he doesn’t need to. He played out of his mind.”

P.J. Charles, who finished with 12 points and 12 rebounds despite some foul trouble in the first half, was in the paint for the final shot.

“Crazy atmosphere. I did not expect it to be like this,” Charles said. “We were down early, fought back and I don’t know what to say. It’s just a great win. It was such a great feeling seeing that ball roll off the rim. I tried to contest it, but he got a good look and just shot it long.”

Both teams finished with 13 treys in the game, including five from BG freshman Patrick Haigh, who was starting for the first time.

“We went back and forth on whether we should start him,” Drenning said. “I know he’s skilled, but we wondered about throwing him into the lineup in this atmosphere. But he has such poise, and he’s so calm. The game is slow for him. I wasn’t worried about his offense, but I thought he was very good on the defensive end as well. For a freshman in his first start in this environment, you can’t ask for much more than he gave us.”

Bishop Guilfoyle was without normal starters Cameron Khoza, who was sick, and Jessiah Witherspoon, who missed the game for undisclosed reasons. Drenning was asked about Witherspoon’s absence after the game. He hasn’t played since scoring 29 points in a win over Bishop Carroll on Jan. 31.

The Marauders did not use Khoza and Witherspoon’s absence as an excuse.

“There’s no excuses,” Drenning said. “We didn’t come in and say, ‘hey we’re short-handed, it’s OK as long as we play well,’ because we came here to win a basketball game. We came here to win. I’ve got a really disappointed locker room right now.”

Charles dominated Bishop Guilfoyle last season, scoring 27 points in a 56-38 win at the AAHS Fieldhouse. Drenning was determined not to let that happen again and had several players close in on the star center when he got the ball in the paint.

Klausman and his Mountain Lions were ready for that strategy.

“That’s the fifth game we’ve had nine or more 3-pointers,” Klausman said. “We worked really hard in practice on everything we run through P.J. Charles in the post running inside out. Every time he touches the ball, there’s two or three people around him. So we worked on second and third options out of those plays. I kept telling my guards, when that ball comes back out, you have to be able to shoot right away.”