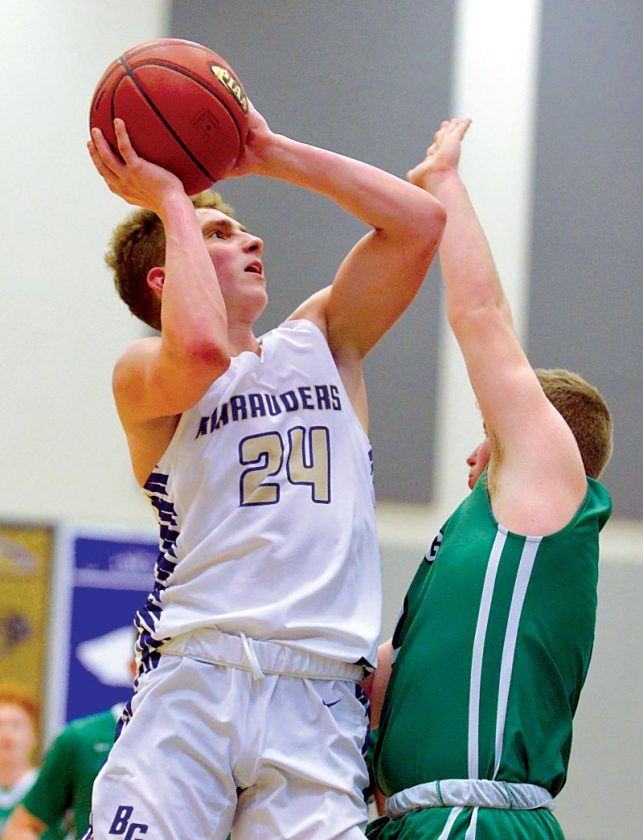 CRESSON — The Bishop Guilfoyle Catholic High School Marauders won their third consecutive District 6 Class 2A boys basketball championship Thursday night, and despite a 19-point margin of victory, it was anything but easy.

The Marauders trailed feisty and gutsy Portage for the greater part of three quarters before BG went into overdrive and used its outstanding athleticism, speed, disruptive defense, and offensive skill to pull away late and post a 66-47 win before a packed crowd at the Mount Aloysius College Athletic and Wellness Center.

“Give Portage a lot of credit — I thought they played harder than us in the first half,” said BG coach Chris Drenning, whose Marauders improved to 23-3. “We talked about that at halftime — playing with more energy in the second half. That led to us getting some turnovers and getting out in transition, and we got going.

“Momentum is a funny thing. I thought once we started playing better defensively, that led to us getting out and getting some open shots.”

BG closed the third quarter strong, scoring five of the last six points to take a 43-38 lead into the fourth quarter, which the Marauders dominated, 23-9, to capture their third straight district gold medal.

“This is a big deal for our seniors,” Drenning said. “They’re such a hard-working group, and when you have a chance to win three times, and you win three times, it’s a testament to the kids and the coaching staff. We’ve just been trying to develop a program that is consistent every year.”

Senior guard Kyle Ruggery scored a game-high 21 points, and senior forwards Michael Montecalvo and Will Helton added 14 and 13, respectively, for BG, which sewed the game up with a 15-0 fourth-quarter run that ballooned what had been a 48-43 lead to 20 points, 63-43.

Montecalvo’s putback started the surge, before Helton followed with two free throws to give BG a 52-43 lead. After senior Jessiah Witherspoon’s alert defensive play led to a transition layup by Ruggery, BG regained possession on a Witherspoon steal and had several second-chance scoring opportunities on tips around the basket before Ruggery drained a 3-pointer from the top of the circle to give the Marauders a 57-43 lead with 4:27 remaining.

“In the first half, we really didn’t play well at all,” said Ruggery, who scored 15 points in the second half. “In the fourth quarter, we got some energy, and started hitting our 3s.

“It’s great that all the work pays off,” Ruggery said about being part of the Marauders’ third consecutive district title team. “I’m happy that we were able to pull it off during our senior year.”

Montecalvo was glad that the Marauders were able to follow suit after the BG girls team won a district title by capturing an overtime victory over Penns Manor on the same floor earlier Thursday evening.

“Portage did a good job,” Montecalvo said. “It was a good game, and (winning a district championship) is always a really big deal. I’m glad that our girls team won, too.”

Helton — who Drenning opined was “the best player on the floor (Thursday night)” — had a game-high 10 rebounds to go along with his 13 points.

“Coming into this season, this (another district title) was one of our main goals,” Helton said. “We executed down the stretch, and came away with the win.”

Portage (20-6) was led by sharp-shooting freshman guard Mason Kargo’s 17 points, including five 3-pointers. He scored 12 first-half points on four treys as the Mustangs held a 28-26 lead at intermission.

Portage, which starts all underclassmen, held a 36-32 lead on freshman Andrew Miko’s bucket from the paint midway through the third quarter.

BG responded with a 3-pointer from the right side by freshman Patrick Haigh, and another trey from the left corner by Montecalvo, to go ahead, 38-36.

After sophomore Kaden Claar made one of two free throws for Portage, Witherspoon scored a bucket off a drive for BG, and senior Luke Adams hit a big 3-pointer from the left corner to give BG the 43-38 lead after three stops.

“I told the kids that I couldn’t be more proud to be their coach,” Kargo said. “We showed what we were made of, and I thought that we battled until the end.

“Bishop Guilfoyle is a real good basketball team, and when they have open shots, they knock them down. But I couldn’t have asked for a better effort from our kids.”

Both teams will advance to the PIAA state playoffs next weekend. BG will play the sixth-place finisher out of the WPIAL, and Portage will meet the third-place team out of District 10.

“Once you get into the state competition, it is always difficult,” said Drenning, whose team made it all the way to the state championship game last season before losing a heartbreaker. “We’re going to use the next week to prepare, and hopefully, we’ll come out and be ready to go.”

Game notes: BG fashioned a 31-18 advantage in rebounds, while converting 26 of 59 floor shots … Portage made 16 of 32 shots, but was only able to get off five shots in the fourth quarter.