Lions wind up with 2 champions 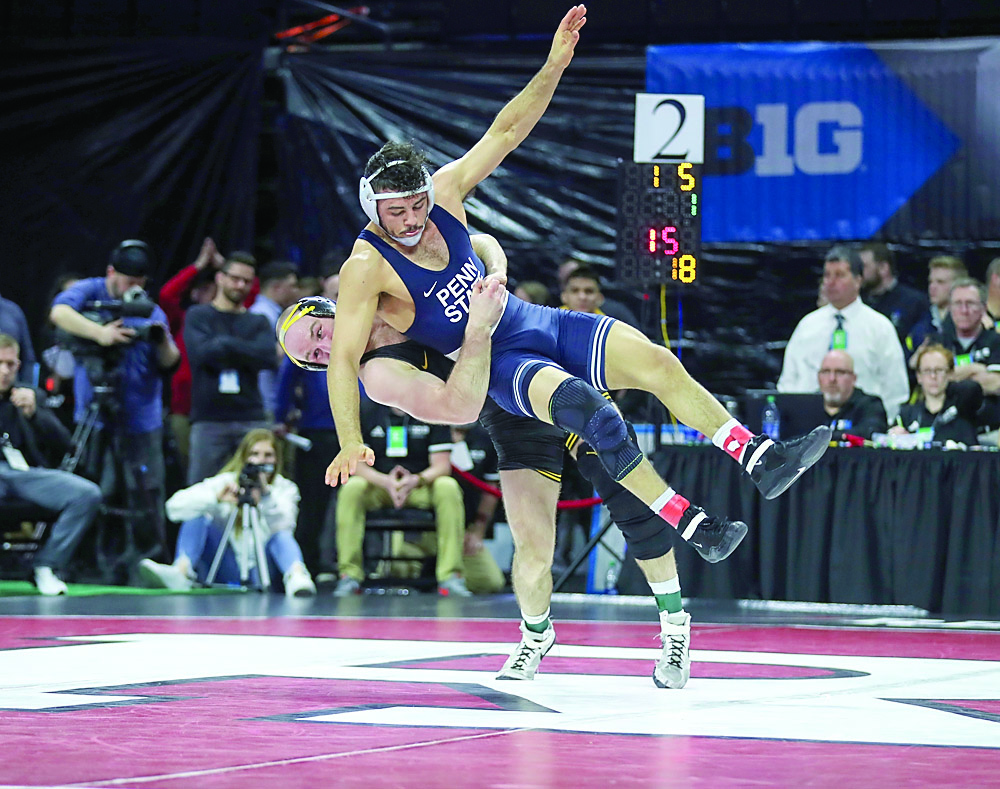 PISCATAWAY, N.J. — On its way to winning eight of the past nine NCAA championships, Penn State hasn’t always performed at its best at the Big Ten tournament.

Rarely, though, have the Nittany Lions endured the combination of bad luck and heartbreaking losses that it did in the 2020 Big Ten Wrestling Championships that concluded Sunday in the Rutgers Athletic Center.

Penn State crowned two champions, but it lost three other championship final bouts and slumped to a fourth-place finish in the team race. The Nittany Lions did manage to push seven wrestlers through to the NCAA tournament. But, adding injury to insult was the fact that the Lions lost one wrestler to a season-ending knee injury and another to a broken hand.

“Yeah, it wasn’t it wasn’t a great day. Obviously, the guys wrestled hard and we can wrestle better. And I think we will in in a week and a half,” Penn State Coach Cael Sanderson said.

“I said yesterday we scored one point in four weight classes and having Seth (Nevills) go down right away (with a knee injury in his first match) and Bo Pipher broke his hand in the first match.”

Iowa ran away with the team title, crowning three champions and accumulating 157.5 points. Nebraska capped off a surprisingly strong tournament by placing second with 132 points. The Cornhuskers didn’t crown a champion but did advance all 10 of its wrestlers. Ohio State, with two champs and 112 points, finished third. Penn State had its two champs and 107 team points in fourth. Purdue was a surprising fifth-place finisher with 83 points.

After a run of three finals losses, Hall finally reversed Penn State’s fortunes with an 8-5 win over Iowa’s Michael Kemerer, avenging a loss in the dual meet.

Hall converted a takedown in the first period and led 2-1 after one. He escaped to start the second and was fending off a Kemerer takedown attempt when Kemerer draped over his back and trapped Hall’s arm, while Hall trapped one of his.

Hall, on his knees, straightened up and then fell onto his side and put Kemerer on his back. The referee started a danger count but Kemerer never broke his grip and Hall was awarded a takedown and two nearfall points to open a 7-1 lead.

“I definitely feel like he could have bailed. I had his arm. I had a good position and I just wrestled through it. Maybe he didn’t hear it. Maybe I did have his hand or something, but it’s just wrestling,” Hall said.

Kemerer eventually escaped, added another in the third and a takedown, but Hall wouldn’t be denied in an 8-5 win.

After Kemerer’s 11-6 win over Hall in the dual meet, assistant coach Casey Cunningham told the Penn State Sports Network that “Mark is a professional. He’ll figure things out.”

When asked what he figured out, Hall said it wasn’t about figuring out anything but rather finding who he was.

“I think last time I was too excited. So now I’m calm, cool and collected, how I always am,” he said.

Brooks was locked in a 1-1 tie with Michigan State’s Cameron Caffey late in the third period when he converted a single leg takedown with 20 seconds to go for the winning points. Caffey escaped with 12 seconds left but Brooks fended him off for the win.

“He’s a calm kid and he has a big-picture perspective which is helpful. He’s a competitor and that’s what we’ve seen, the bigger the match, the better he wrestles,” Sanderson said of Brooks.

Brooks, who has steadily improved since being pulled off redshirt in December, was at his best during the Big Ten tournament. He attributed that to his conditioning.

“My cardio is really peaking right now so I feel like when you’re really confident in your cardio, you can go as much as you want. When you’re not, you don’t shoot as much. Me knowing my cardio is right there at its peak, I can go out there and fire off multiple shots,” he said.

Sanderson was already pulling positives moments after the tournament ended to build on for the NCAA tournament.

“I thought Cenzo wrestled really well, he just lost to a tough guy. And I thought Roman was wrestling well,” he said. “Again, I think we lost to guys who they could very likely be wrestling in the national finals, so they just have to stay positive and focus on Minneapolis.”

Sanderson said several times that the Nittany Lions will be better at the NCAA tournament and, with his track record, who’s to argue?

“But, yeah, I’m excited. As a team, we’ve got to lick our wounds a little bit and we kind of kind of got beat up a little bit this weekend, but we’ll get things figured out and get ready to roll. I think overall we looked a little tight, as a team and we just have to breathe and get ready to go,” he said.

“We want to contend and it’s not even about contending. It’s about let’s be the best we can be all the time. Everyone says that, and it makes for a great theme, but we want to do it. We want to live it and that’s hopefully what we can take into Minneapolis.”

Tourney notes: The Big Ten was awarded 79 automatic qualifiers and all but one team, Maryland, which didn’t score a point in the tournament, qualified at least two for the NCAA championships. Here’s the breakdown: Nebraska 10, Iowa 9, Purdue and Ohio State 8, Penn State 7, Michigan, Michigan State, Wisconsin and Illinois 6 each, Northwestern 5, Minnesota 4, and Rutgers and Indiana with two apiece.