Giger: Anti-social behavior: Death threats made to Clifford are appalling

Commentary: Social media attacks against athletes are out of control 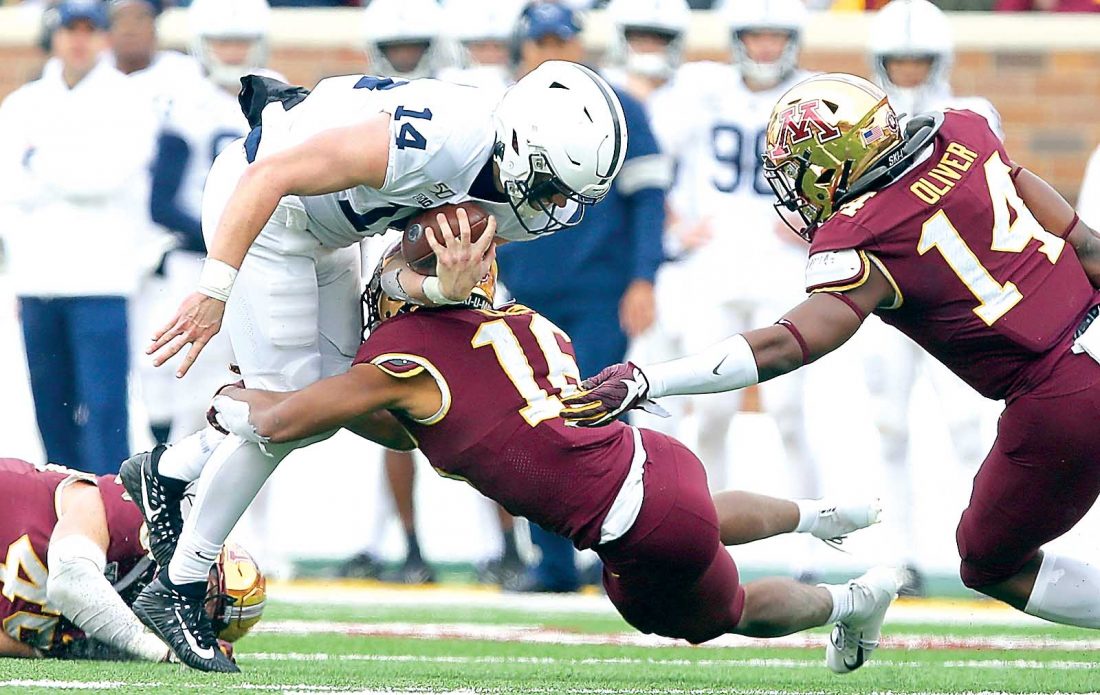 We live in sad times, and there are reminders of that every single day.

Now, I could go any one of 100 different directions with that setup. In this case, I’m going to stick to sports.

Penn State football, specifically, and the troubling news that came out Tuesday.

Nittany Lion quarterback Sean Clifford disclosed that he has received death threats on social media. Which is just so pathetic and appalling that it seems unbelievable.

But in this day and age, what’s truly appalling is that it actually is believable.

Speaking on a teleconference Tuesday, Clifford said this about some of the messages he received on social media following Penn State’s 31-26 loss to Minnesota two weeks ago:

“It’s kind of sad to say, but you know how fans sometimes get. It gets a little crazy. I was kind of, I guess, sick and tired of getting death threats and some pretty explicit and pretty tough-to-read messages.”

Clifford, who threw three interceptions in that loss, responded to the explicit messages by deleting his social media accounts. He usually tries to ignore them by taking a break from social media during the season, but these messages went too far, so he had to shut it all down.

Sean Clifford is a 21-year-old young man from Cincinnati. He’s a good guy. Smart. Charismatic. A natural leader. A great teammate. An excellent representative of his university. A testament to the kind of person you want to root for in sports.

Penn State fans should be damn proud that he’s the team’s quarterback.

My guess is that 99.9 percent of fans out there probably agree.

But in life, it often only takes a few knuckleheads — sometimes even just one — to ruin things for everybody else.

Whoever decided to send Clifford death threats or other hateful attacks via social media is sickeningly way, way out of bounds.

This is football. A game. Yet some fans get so tied up emotionally in it that they can’t stop themselves from spewing vitriolic ignorance.

We’ve seen it before from Penn State fans. Including:

n When running back Silas Redd transferred to USC during the scandal. Twitter was filled with toxic, hateful comments aimed at him.

n When Sam Ficken missed several kicks at Virginia in 2012. It was disgusting reading some of the awful things written about him on Twitter.

n Earlier this season, a fan wrote a racially insensitive letter to safety Jonathan Sutherland, complaining about his hair and tattoos. Who the hell is some football fan to say how a young man should look?

This is not to single out Penn State fans here, because I’m sure fans of other teams have written or said equally ridiculous things to their players. These are all just examples from this undeniably passionate fan base.

The Lions are 9-1 and ranked No. 9 in the country. Clifford is a big part of that. But even if Penn State were 6-4 and outside the top 25, it would in no way, shape or form warrant fans attacking a college student-athlete in a personal way.

College football is big business, and fans absolutely have the right to criticize how someone is playing. That’s fair game.

But personal attacks are just absurd.

“You know, you learn how to deal with certain things and how certain people are just going to react because it’s a very passionate game with a lot of passionate people,” Clifford said. “Our fans are are definitely one of, if not the most passionate (fan bases) in the country.

“I just try to stay away from it. I appreciate all of the positive people that are around, but there’s also people that try to tear you down. It’s always just been better to keep your head away from that kind of stuff.”

James Franklin was asked Tuesday about the social media attacks on Clifford and had some poignant comments.

“I don’t know where we are as a society,” the coach said. “It’s concerning. “We’re 9-1. We’re ranked in the top 10, I think. Having had a pretty good year based on most people’s standards. Sometimes you go on social media and you wouldn’t feel that way. The fact that our players are having to deal with stuff like this.”

“Obviously football is just a very, very small piece. But I do think it’s a microcosm of a lot of other issues that show up in our society. I’m not sure why we accept it or why we think it’s OK.”

Franklin is right. All that stuff is not OK.

Twitter and social media give people free rein to write pretty much anything they want. And if you use those forums frequently, you realize that a lot of people write some truly awful things.

Personal attacks. Name calling. Threats. Twitter especially can be terribly depressing and lead you to believe that we, as a society, lack civility to such a degree that we are incapable of having nuanced conversations or debates without immediately trying to rip another person.

You want to know the truly sad part? And it pains me to say this, but I believe it to be the truth.

This is all just the tip of the iceberg.

Young people are going to grow up believing that this spewing of hatred is normal. Yes, I’m trying to stick to sports here — really trying — but you know as well as I do that all of this goes so much deeper.

These are sad times. And sadly, I’m not sure there’s any end in sight.

Turgeon to manage Curve in 2020

The Curve’s new manager, Dave Turgeon, has a wealth of coaching and teaching experience with young prospects and ...

HOLLIDAYSBURG — It all started with a jumper from Hollidaysburg girls basketball senior Meghan Snyder. Morgan ...

MORRISDALE — Glendale pulled away from West Branch in the final two bouts, as Zeke Dubler and Suds Dubler eached ...

LOYSBURG — Tussey Mountain rode a well-balanced attack with four players in double figures to hold off a rallying ...