Giger: PSU can make playoff with one (good) loss 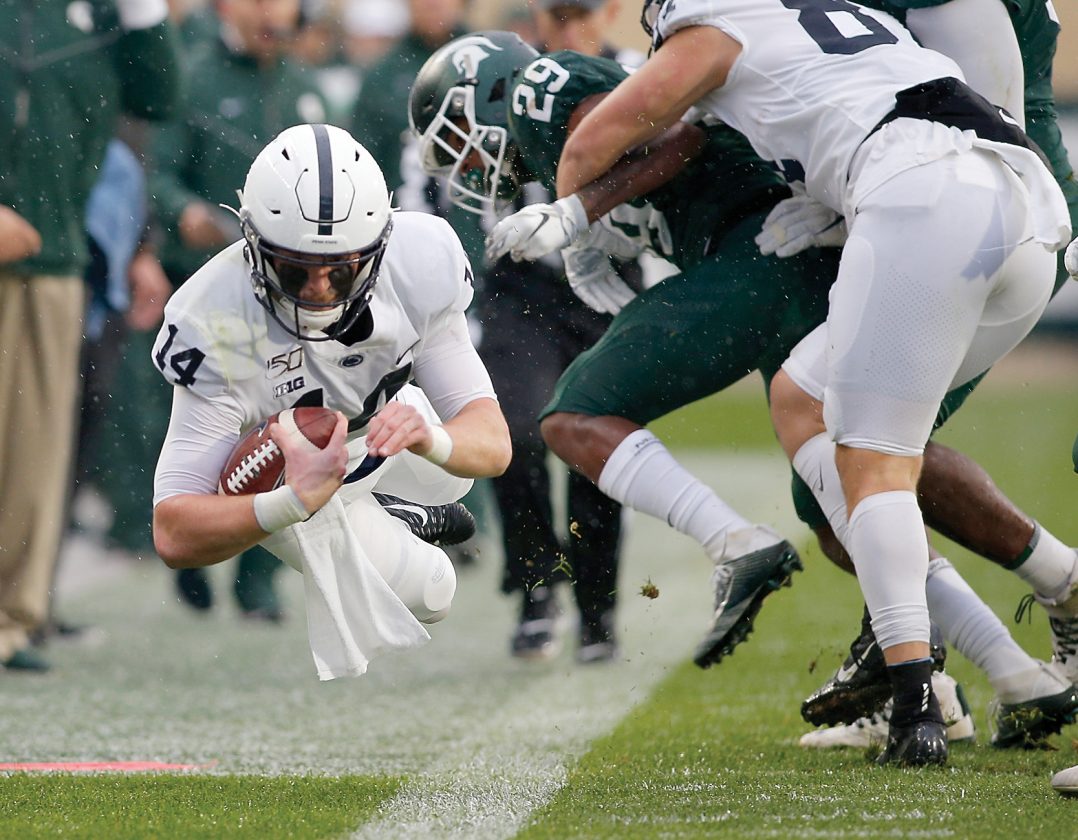 This should be an exciting time for Penn State football fans with the program very much in the running for a chance to make the College Football Playoff for the first time.

The Nittany Lions are No. 5 in the latest AP and coaches polls and would be a lock for the CFP if they go undefeated during the regular season and win the Big Ten championship game. That’s a given because it would include a victory at Ohio State in four weeks.

But let’s try and figure out what would happen if Penn State loses to the Buckeyes. They still could be very much in the CFP mix, depending on a number of factors.

Clemson almost certainly will win out. Its schedule is extremely soft.

Let’s assume the winner of the LSU at Alabama game in two weeks goes undefeated. That team would be in.

If Ohio State beats Penn State and wins out, the Buckeyes would be in.

So that’s three of the four spots.

At that point, the fourth member of the CFP field would be a one-loss team. Then it would come down to which of several one-loss teams has the best resume.

It is imperative, for our discussion here, that Penn State plays a good game at Ohio State and loses by no more than 10 points. Many people believe the Buckeyes are the best team in the country, and there would be no shame in losing by 10 at Columbus against that fantastic outfit.

Here are the other potential one-loss teams Penn State would be up against:

n LSU: This very well could be the biggest obstacle to PSU getting into the playoff. I’m going to go ahead and assume that Alabama beats LSU in two weeks. What Penn State fans should be rooting for is the Tide to crush LSU — by at least 17 points and certainly a whole lot more. If LSU gets blown out and Penn State barely loses to Ohio State, it could go a long way to the CFP committee deciding to pick the Lions over the Tigers. What PSU really could have used was LSU losing to Auburn this past weekend and then losing to Alabama, which pretty much would have knocked LSU out of the picture. But LSU held off Auburn, 23-20, so that was a bummer for the Lions.

n Florida has one loss now but should lose to, say, Alabama in the SEC title game. That would eliminate the Gators.

n Oregon has one loss — to Auburn in the opener (27-21). I have watched the Ducks play a few times, and I just don’t think they’re as good as Penn State. If the Lions lose a close game to Ohio State, I believe they’d get into the CFP over the Ducks, who don’t have a great resume.

n Georgia has a bad loss at home to South Carolina. They could still get in, though, if they beat Auburn in a few weeks and eventually beat Alabama (or LSU) in the SEC title game. There would be chaos in the CFP selection process if that were to happen because you potentially could have a whole slew of excellent one-loss teams — including Alabama and LSU. For PSU’s sake, Georgia needs to lose again, which is likely.

n Baylor is undefeated and a great story, but Matt Rhule’s team still has to play at TCU then at home against Oklahoma and Texas. No way Baylor goes undefeated.

n Utah has one loss (at USC) and could finish that way with a Pac-12 title. But I don’t see the Utes getting in over a one-loss PSU team.

n Oklahoma is very interesting. The Sooners could finish with one loss — Saturday’s 48-41 head scratcher at Kansas State — and still be in the running for a CFP bid. That loss was a tough one, but Oklahoma rallied from down 48-23 and made things very interesting. That late rally helped the Sooners avoid an embarrassing blowout loss, so they would still have a decent shot if they finish with one defeat.

I know all of this seems like a lot, but it’s really not. It’s actually pretty simple for Penn State, if all the dominoes fall the way they’re supposed to fall.

In a nutshell: I believe the Lions would get in if they lose by 10 or less at Ohio State, Alabama blows out LSU and then both Alabama and Ohio State go undefeated.

That’s it. That would leave you with a field of undefeated Alabama, Ohio State and Clemson, plus a one-loss Penn State.

I’m not saying the Lions would be a slam dunk in that scenario because LSU, with a lone loss at Alabama, still would have a very strong claim. But Penn State needs to play better against Ohio State on the road than LSU does in its road game at Alabama.

Like I said earlier, LSU holding on to beat Auburn was bad news for Penn State, but that’s water under the bridge now.

I don’t think the Lions will win at Ohio State. Right now, the Buckeyes are favored by 13 1/2 points. But if PSU is undefeated going into that game and then gives an outstanding effort in a close loss, we very well could see the Lions in the playoff field.

One last thing: What if PSU loses at Minnesota (barely) and then wins at Ohio State? I would still give the Lions a very strong chance to get in as a one-loss team because that win in Columbus, over a tremendous club, would be such a huge accomplishment.

UNIVERSITY PARK — Penn State has long been known for its ability to produce bushels of bonus points, especially ...

There’s never been a Penn State basketball season quite like the one that’s developing before our eyes. Yes, ...