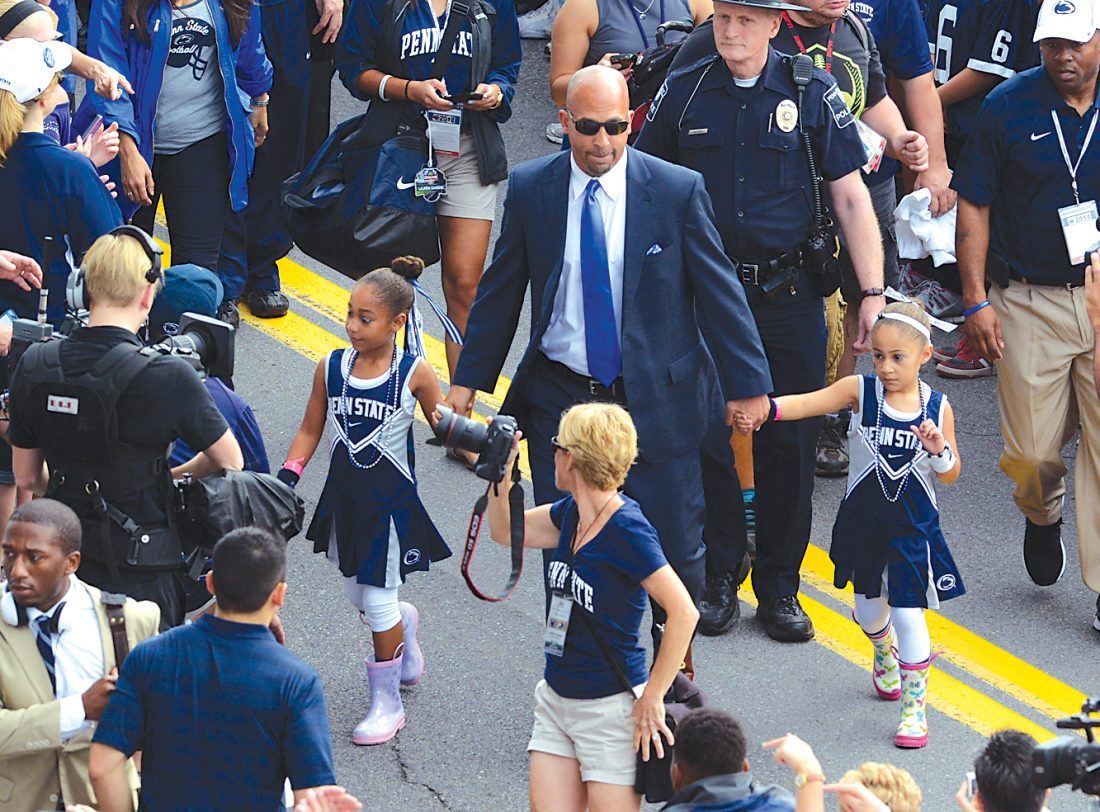 Mirror file photo by Patrick Waksmunski In this photo from 2014, James Franklin walks into Beaver Stadium with daughters Shola (left) and Addy.

UNIVERSITY PARK — There are a ton of workaholics in the world, and some jobs require that you be available to work pretty much all the time.

When you’re young and single, you just deal with it.

You embrace it, even.

For many people, that constant drive to work becomes part of their identity, and it’s a big reason why they achieve success.

But as most people quickly realize when they start a family, transitioning from workaholic mode to finding a good work-life balance can be tough.

If you stop working as much and as hard as you always have, many people feel like they run the risk of missing out on more professional success.

But if you don’t devote the proper amount of time to your spouse and children, sadly, that’s how so many families fall apart.

I’ve dealt with all of this in my personal life. Many of you have.

You can tell it’s something that Penn State coach James Franklin thinks about — a lot.

On numerous occasions over the years, Franklin has discussed how he tries to balance the enormous time management responsibilities of his job with spending enough quality time with his wife, Fumi, and daughters, Shola and Addison.

During media day last Saturday, Franklin was asked a simple question about how his summer went and if he did anything away from football.

His answer lasted nearly five minutes, as he probed into the whole work-life balance issue.

“I don’t spend enough time with my wife and kids year-round,” he said. “I think you guys have heard me say it before: I have a significant amount of coach guilt.”

Sure, Franklin makes millions of dollars a year, and all of that affords him and his family a certain type of lifestyle. But major college football coaches are constantly pulled in a thousand different directions, serving as CEOs of huge sports organizations, and their families just have to accept that dear old dad won’t be around much.

To Franklin’s credit, he goes to great lengths to spend as much time as possible with his girls, who are always around the football program.

Franklin then told a funny story about the summertime.

While certainly still busy with camps and recruiting and preparation for the season, college coaches do have a little bit of down time during the summer. So, as the coach said, he goes from spending very little time at home to a whole bunch more time at home.

“(The kids) have been begging for me all year long, and then they go from not having me enough, to having a full dose of James Franklin,” he said with a smile. “And like after the first three hours, they are like, ‘Can’t you go back to work, we’ve had about enough of your butt.'”

I grew up watching the classic Michael Keaton stay-at-home dad movie “Mr. Mom” about 50 times. Probably 500 times in my life I’ve said the comical phrase from the film, “220, 221, whatever it takes” to friends and family, and it NEVER gets old.

Little did I know that I would grow up to be Mr. Mom. I’m home with my 6-year-old twins, Chase and Callie, all day, and it is fantastic.

Sometimes you would give anything to be with your kids a lot more. Sometimes you can’t wait to get away from them.

So yeah, I can relate to what Franklin was saying about how the summer is different for his family because he’s suddenly around the kids all the time, and that can be a big adjustment.

Something else Franklin said about family time hit home with me, and probably to lots of people.

It’s about the phone.

I’m guilty of being on my phone all the time. Many of you are, as well.

But the thing we all should remember is this: It can wait.

When you’re at home with your family, make them the priority. Not your phone.

Franklin said he found a good balance with that this summer.

“I would wake up early before Fumi and the kids got up, try to respond to all my emails and text messages,” he said.

“You’ve got 125 guys (in the program), there’s always something going on. So, try to get up in the morning, do that, and then try to put my phone on the side of the bed and then go out and do whatever we were going to do for the day and come back at night and respond to whatever messages I had.”

Imagine that beautiful concept: Check the phone in the morning, put it away for the day, then come back to it at night.

Wow. Is that really possible?

All of this reminds me of something that happened last year. A Pitt assistant coach, Tim Salem, talked about how a little piece of him dies after a loss and that he doesn’t want to go home because his wife will make him do work around the house.

Salem said he ends up sleeping in his office so he can do more work.

Penn State offensive coordinator Ricky Rahne was later asked if he sleeps in his office, and Rahne had one of the greatest quotes I’ve ever encountered in this business.

“I never sleep at the office cause I only live five minutes away,” Rahne said. “I think it’s important that my two boys know that their mother is the most important thing in my life.”

Family is more important than your job, no matter how important your job is.