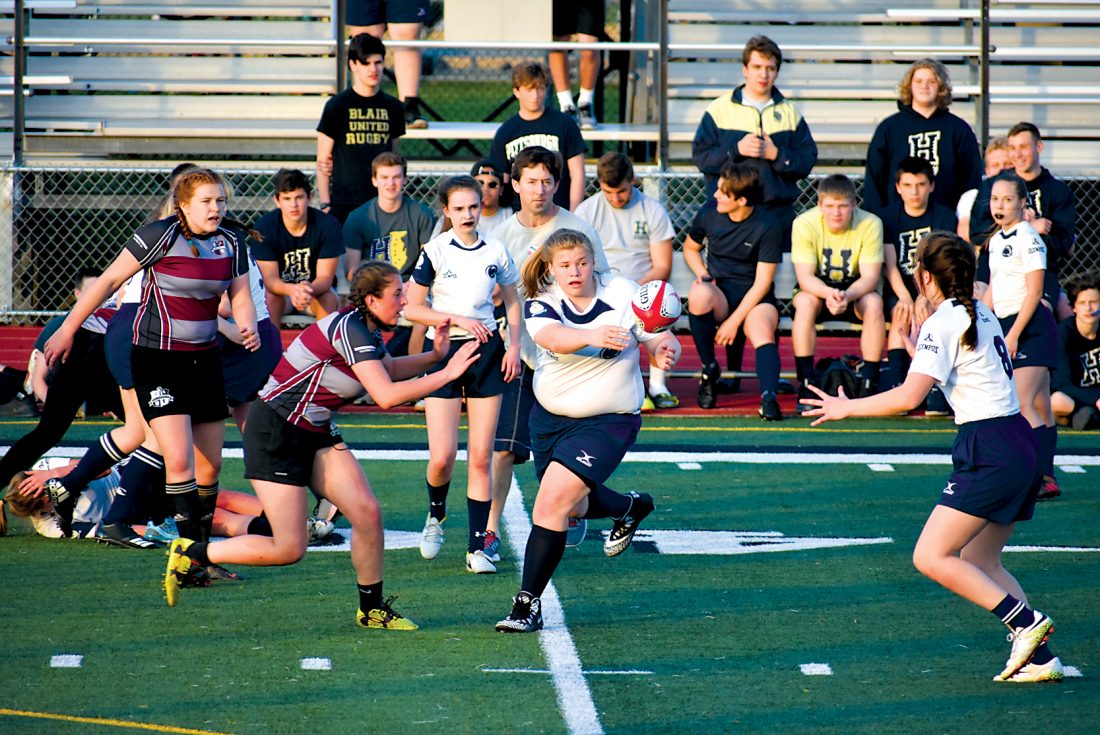 Early in the 2020 calendar year, the Hollidaysburg Area/Blair United Rugby program was flourishing.

The Blair United senior high boys team — which is made up of 32 players from Hollidaysburg, Altoona, Bishop Guilfoyle and Bellwood-Antis high schools — was entering its fourth season, with a legitimate chance to win the RugbyPA organization’s Division 2 championship this spring.

The Blair United girls program, with 25 girls players in grades 9-12 from the same four county high schools, was set to begin its first full regular-season schedule this year after participating in four exhibition games in 2019.

And the fledgling new junior high program, with 18 boys and one girl in grades 6-8 on its roster, was about to kick off its inaugural season by participating in several tournaments.

“We had a practice at (Hollidaysburg’s) Tiger Stadium in early March, and there were over 50 kids there all over the field just practicing rugby,” said Andy Haines, the head coach of both the senior high boys and junior high teams, and the “athletic director” who presides over the progress and development of all three teams.

Then the COVID-19 pandemic hit the United States in mid-March, shutting down classes, athletic programs and their seasons, at colleges and high schools all over the country.

The RugbyPA organization has also been among those programs affected. Though the Blair United rugby program is not affiliated with the PIAA, Haines said that the rugby program follows the same mandates that the school sports programs are operating under.

The Blair United regular season, which runs from March until mid-May, became one more sports casualty of the pandemic.

“We couldn’t use the fields, the kids have been out of school, and everybody kind of knew that the season wouldn’t be happening,” Haines said.

The best-case scenario probably would be that the COVID-19 curve is flattened out enough to enable players in all three rugby leagues to safely congregate to participate in a few tournaments over the summer months.

“If things get better and everybody is allowed to get back together, we may play some tournaments throughout the state in June and July,” Haines said. “Then we’ll start up again in the spring of 2021 with a season for all three teams.”

Haines started the senior high boys program from scratch four years ago, and rugby’s popularity among high school athletes in this area has taken off since then.

“We started off a few years ago with maybe 18 boys on the varsity team,” Haines said. “In four years, we have over 70 kids total (between senior high boys, girls, and junior high players) wanting to play rugby.

“We had been really happy (with the progress),” Haines added. “We had 1,000 people (at Tiger Stadium) attending one of our (senior high boys) games against State College under the lights last year. It was really great.”

The team had been set to play a 10-game schedule — five home games at Tiger Stadium and five road games — and, led by St. Bonaventure University-bound outside center Trenton Paddock, the squad had high hopes this spring.

But those hopes have been dashed by COVID-19.

“It’s horrible, we’re devastated,” Haines said of the pandemic’s effect on the rugby season for his three teams. “We had a really good senior high class of both boys and girls coming back. The senior high boys team was going to compete for a state championship this year.”

The head coach of the girls team is Summer Lauber, a former St. Bonaventure women’s rugby player. Her assistant coaches are Jessica Blyler, who played collegiate women’s rugby at the University of Pittsburgh at Johnstown, and Sophia Dellinger.

The girls team — which is led by sophomore standout Aubrey Sipes — plays in a league with State College, Kiski Area, Moon Area, Chambersburg, and Bishop Shanahan High School from the Philadelphia suburbs.

Collegiate women’s rugby progams have been expanding and thriving throughout this country, with Penn State just one of the universities around the nation to have women’s rugby as a team sport.

The trickle-down effect has hit high schools, with more and more girls getting involved in rugby — what had traditionally been a male-dominated sport.

“Last year, we went over to Bishop Guilfoyle to recruit some boys for our boys team, and a couple girls came up to us and asked us to start a girls team,” Haines said, noting that last year’s girls team went 2-2 in its four exhibition matches. “The girls are looking for another sport to participate in the spring besides softball or track, and the response (for rugby) has been fantastic.

“On the girls side, the hitting probably isn’t as intense as it is on the boys side, but I think that once some of the girls come out for the sport, and they get to hit somebody and tackle somebody — which they can’t do in any other sport — they discover something in rugby for themselves,” Haines added.

Lauber said that the enthusiasm on the part of the girls players was evident during practices in early March.

“I love the fact that there is a girls program here,” Lauber said. “The girls have really taken to (rugby), they have all picked up on it, and everybody seems to enjoy it.”

Even though this season was a washout for the Blair United rugby programs, just as it was for athletic progams all across the nation this spring, the future looks very bright.

“Five years ago, if you had asked me if we would have three rugby teams — especially a girls team — in this region, I would have laughed and said ‘No way,”’ Haines said. “I think a lot of kids here want to play the sport. We’re getting there.”