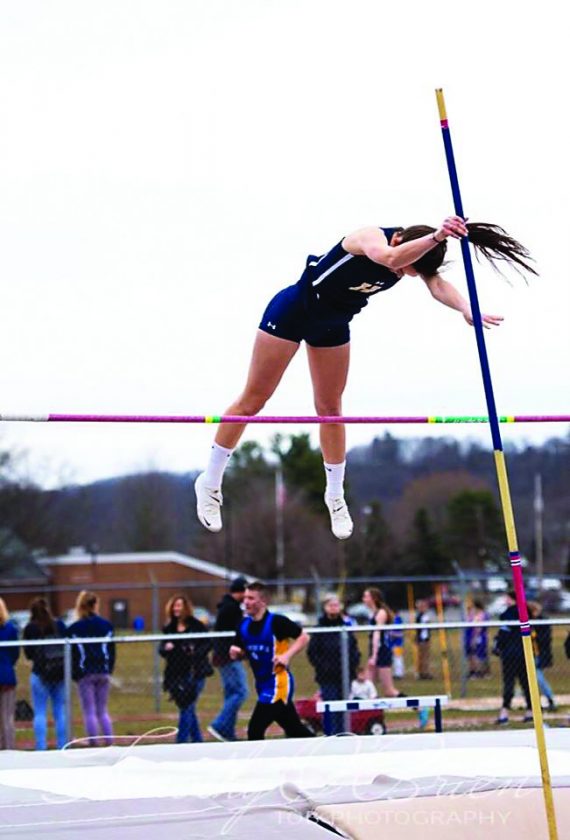 Courtesy photo Sarah Isenberg was a standout in the pole vault and high jump at Hollidaysburg Area High School.

Usually because of the distance between the high jump and the pole vault events in high school, it’s quite a long distance to travel for an athlete who competes in both events at a district event. Hollidaysburg’s Sarah Isenberg is no stranger to that distance.

“Well, one memory is how poor Sarah wound up participating in multiple event finals at the same time, and she was running from one end of Mansion Park for high jump to the opposite end to take a jump in the pole vault. Again and again,” Don Tantius, the Lady Tigers head coach, recalled.

Isenberg would have made that trip several times this spring as a senior Lady Tiger for Tantius and the Hollidaysburg program, but because of the coronavirus pandemic, that all ended in mid-March.

If Isenberg, a senior, has to make that trek during a track and field event ever again, it will be in the spring of 2021 at IUP where she will attend college and compete athletically as well.

“This season I had really hoped I could focus on high jump and become more consistent at higher heights,” Isenberg said. “Unfortunately, as with everything else in the world, our senior track season was canceled, which was very heartbreaking for me as this was my last season with some of my best friends.”

One of those friends was her sister, Emily Bumberger, who was going to be a freshman thrower on the team. That was not only hard on the sisters, but on mom, too, who was a thrower in high school at Central in the 1990s.

“I was sad because I waited all year to see both of my girls compete and now I won’t get that chance,” said Renee Bumberger. “I was also looking forward to Sarah breaking the pole vault record (at Hollidaysburg), and hopefully go to states for the high jump.”

That is the one thing that bothers Tantius, who talked about how much better Isenberg was getting each year since her freshman campaign.

“She jumped an inch below the state qualifier and at the indoor automatic qualifier a number of times last season,” he remembered. “We were looking forward to her getting that this year.”

What made Isenberg’s three years on the track team even more impressive was that she didn’t even go out until her freshman year.

“Most for the fact that I wasn’t sure how to sign up because I had never been in a school sport previously,” said Isenberg, who also played soccer for the Lady Tigers. “My favorite part (of track and field) is probably everyone that I meet. The coaches are amazing and I met most of my closest friends through the sport.”

As good as she is in a sport known for its individuality, it was something else that made Isenberg special for Tantius, who’s been at it for 34 seasons in Hollidaysburg.

“Being an athlete that is as well-rounded as Sarah, it’s nice to always have that go-to person who would do anything for the betterment of the team, which meant that if a relay was to be run, Sarah was always a go-to option (for us),” he said.

She will graduate from Hollidaysburg as one of the record-holders in the pole vault. But as far as college goes, she already knows what she wants to do.

“My main attraction to IUP was for the education aspect,” she said. “When we toured the campus, we had the opportunity to speak with the jump and distance coach. After speaking with them, I decided I will probably focus mainly on the high jump.”