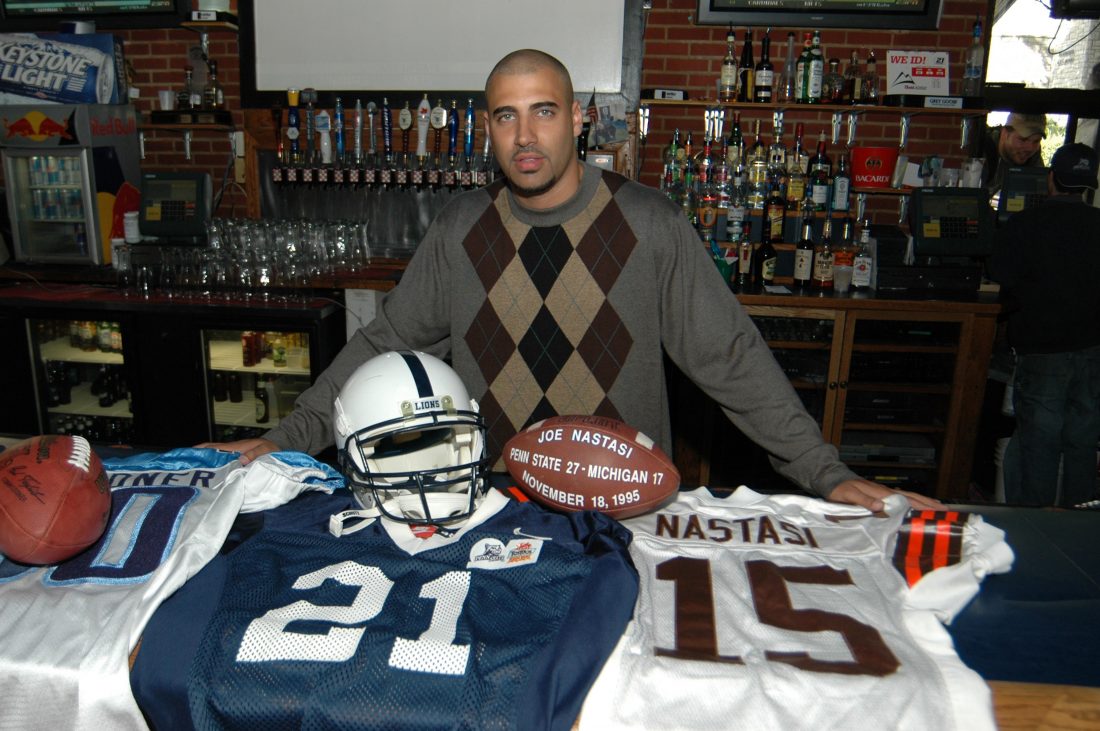 The Bedford County Sports Hall of Fame has a unique process: It generally waits 25 years following an athlete’s career before enshrinement.

Reasoning is simple: The mission is designed to be a career honor but also to extend the understanding and provide full appreciation of legacies.

“We’ve attempted to allow the next generation of Bedford countians to learn what these athletes and coaches have done throughout the careers,” Sam Shuss, organization president, said. “Many times, if they’re put in immediately after graduations (from high school or college), that doesn’t necessarily happen.”

Framed on that backdrop, Joe Nastasi received his congratulatory induction call several months ago. While appreciative, he joked to his family, “No one will know who I am.”

Shuss sees no cause for concern as Nastasi’s resume — three-year regular as a Penn State wide receiver and the 1998 team captain and the sixth-leading scorer in Pennsylvania scholastic basketball history with 2,961 points — will be remembered well beyond the next 25 years.

“Joe was one of the greatest all-around athletes to ever come out of the county,” Shuss said. “When I started covering sports (for the Bedford Gazette), he was one of the first big names.”

For Nastasi, who starred at Northern Bedford County High School and committed to Penn State in the spring of his junior year — triggering an early verbal national trend that has chaotically mushroomed to this day — it’s a welcome dose of nostalgia.

From his days as a high school and college athlete to his brief NFL pursuit (Nastasi was a free agent with the Cleveland Browns) to now being the father of an aspiring baseball-football player at State College Area High School, Nastasi has long focused only on the next practice and the next game.

Preparing for today — what he called “a humble standpoint” — has given him a chance to pump the brakes.

“I was always looking to the next step and the next level, and I never really looked backwards,” he said. “If anything, this is a walk through memory lane.”

It starts with his family, his father, Joe and mother, Rena, and includes his younger brother, A.J., who went on to become the state’s all-time scoring leader with 3,833 points.

“I give my dad so much credit,” he said. “I had to catch an eye somewhere. (Being from a small school) I could have been easily passed up.”

Now an investigator in the Pennsylvania Bureau of Labor Law Compliance, Nastasi, 43, has an office in Altoona. He has found himself driving past many of the buildings where he honed his basketball skills.

“I look back and think about all the people, all the places, and it’s so much more than the big stadiums,” he said. “You start thinking about Building II and the Jewish Memorial Center, the court in East Juniata and Mansion Park. All that stuff comes back. I think about the Altoona area and the growth part of it, and all those pieces are instrumental.”

He remembers being in 3-on-3 basketball tournaments with and against Danny Fortson.

“Altoona made that run to the state championship game (in 1991),” he said. “We had a lot of good players. That Tussey (Mountain) team was really good. We played so much basketball with those guys.”

Satisfied he did that, Nastasi can pass some lessons onto his son, JoeJoe, a budding pitcher who has contributed to the Little Lions’ football team. Nastasi has also spent the last few seasons as receivers coach at State College.

“When you put the cleats away, you’re ready to start teaching,” he said. “I feel with my athletic experience, I don’t have any regrets. I never say, ‘I should have gone here or there.’ I feel like I maximized my athletic career. I was totally satisfied.”

Cream of the crop