Signing off: Wilson much more than a broadcaster 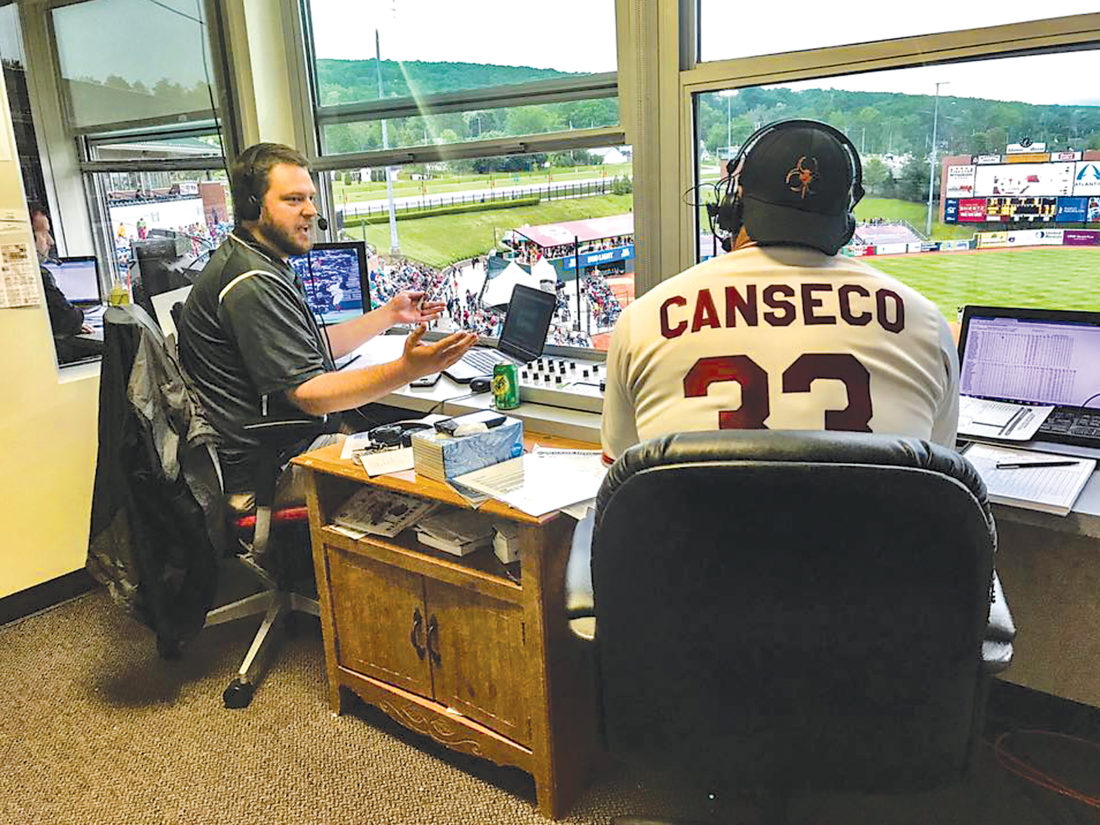 The Curve are losing one of their most important employees, one who has done a marvelous job working in the present while making sure that the past will always be remembered in the future.

What does all that mean?

The job of a minor league broadcaster is one of the most tireless positions in an industry where everyone works extremely long hours, most for little pay and often few rewards. The broadcaster doesn’t just call games, and in fact, that’s a very small part of the job.

The record keeping, note taking, PR, writing, website administration, interview requests, coordinating transactions and other logistical aspects of the job actually take up much more time than is spent on the air. And all of those things are, in fact, far more important than doing play by play of any given game in the minor leagues.

For the past four seasons, Trey Wilson has handled communications and broadcasting duties for the Curve, but the Virginia native is getting set to move on to an opportunity he just couldn’t turn down.

Wilson is heading back to his home state to be the new radio voice of the Richmond Flying Squirrels. He’s replacing Jay Burnham, who recently left the fellow Eastern League team to become play-by-play voice for UMass men’s basketball.

“The four years I’ve spent with the Curve have been incredible,” Wilson said. “I’m beyond grateful to the Lozinak family, Rob Egan, Derek Martin and Mike Passanisi for giving me the chance to live out a dream with a top-notch organization.

“I’ve been lucky to walk in those doors at PNG Field, which I think is one of the best ballparks in baseball, every day and work with a great front office staff, Pirates players and staff and group of media members. Calling that (EL) championship in 2017 is easily my favorite moment in my professional life.”

Wilson said he wasn’t looking to leave the Curve because he’s “poured so much of myself into this organization, it’s hard to let that go.”

But Richmond is only 100 miles from his hometown of Portsmouth, and knowing Wilson well is understanding that he loves his Virginia roots.

“To be able to do a job I love in baseball and be close to my family and friends is something I just couldn’t say no to,” he said. “I’ll be back, though. Richmond comes to town three times next year. It’ll be weird sitting in the visiting booth, but I’m looking forward to seeing everyone again in April.”

Wilson came to the Curve in 2015 as an assistant to Passanisi, who left in June of that year for a PR job with the New York Mets. Passanisi was phenomenal at his job with the Curve, as were most of his predecessors with the club.

The franchise has hit home run after home run with broadcasters, starting with Egan and Jason Dambach during the inaugural 1999 season. Those two set the tone for being professional, not only on the air, but also in making sure that the Curve did an excellent job with the daily grind of notes packages and keeping up with records.

If you’ve read my coverage of the Curve at all over the years, you know I love keeping track of the franchise’s history. Some of you may get tired of reading so much about Adam Hyzdu, Brad Eldred or Josh Bonifay, but to me, those guys will always be every bit as important to Curve history as Andrew McCutchen, Gerrit Cole or other MLB stars.

One thing that has always concerned me over the years is that the Curve would hire a radio/PR guy who didn’t care much about the team’s history or making sure that proper record keeping measures were in place.

That was never a concern with Wilson. He’s exceptional at all that stuff, going to painstaking, time-consuming measures to keep track of records and streaks and giving them historical perspective.

I cannot tell you how tough of a job that can be, but I can tell you how important it is, especially with a franchise that’s now 20 years old.

“Keeping track of the records and statistical information is vital to telling the story of this franchise as a whole,” Wilson said. “It means more to the fans here than in most other minor league markets, in part because of the affiliation with the Pirates, but also because so many fans see the team as a representation of their hometown.

“We try to take that information and add context to it to form the broad picture of the team’s history. I wasn’t around to see Andrew McCutchen or Brad Eldred or Adam Hyzdu, but I have to know what their contributions were to add the next chapters to that story.

Wilson is an excellent, thorough play-by-play broadcaster and will do very well in that role with Richmond, where he will work alongside former Curve GM Todd Parnell.

“We wish Trey the best of luck in this new chapter of his career,” Curve GM Derek Martin said. “In the minor leagues, we not only help develop players to get to the next level, we also develop staff members to get to the next level towards their dream job. Trey has done an outstanding job for us the last four years. He wore many hats for us and put many hours in to complete everything.

“Trey is a perfectionist, so he probably put more hours in than most people in his position do. We have been blessed the past four years with Trey, and we wish him and his family the best.”

Taking Wilson’s place as communications and broadcasting director with the Curve will be Garett Mansfield, who came to the organization as Wilson’s assistant last year. Just like Wilson was able to learn how to do the job the right way under a true pro in Passsanisi, Mansfield has had that opportunity learning under a great mentor in Wilson.

It’s been that way from the beginning with the Curve, which has allowed the franchise to maintain a high level of consistency with its broadcasting and public relations.

“From early on with Rob Egan and Jason Dambach, the Curve have put an emphasis on having a strong broadcasting and media setup,” Wilson said. “They continue to bring in people who are committed to producing a high quality of work. Garett has done great work for us over the last year, and I think that tradition will continue under his direction.”