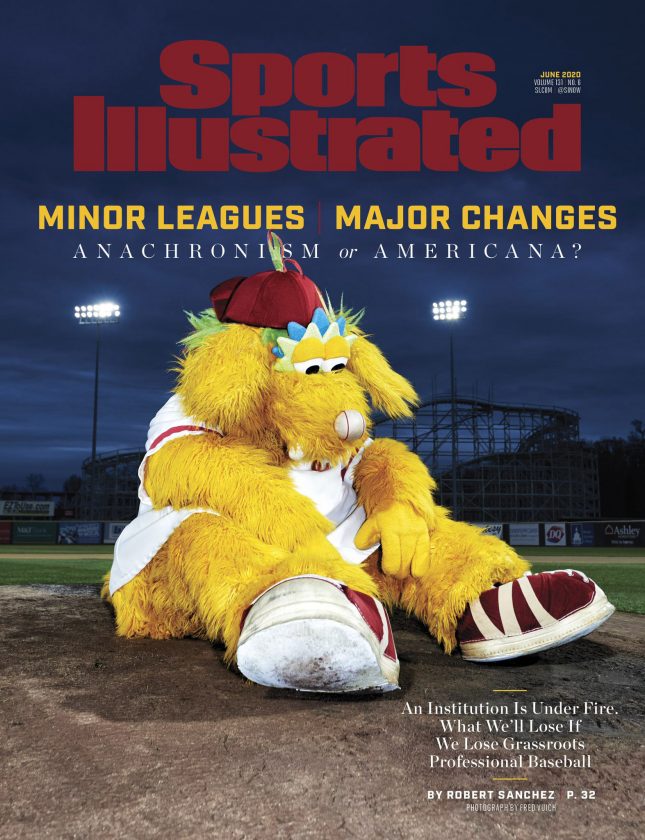 Courtesy photo Loco is on the cover of the June edition of Sports Illustrated in a story about minor league baseball.

The Altoona Curve have yet to play a game this season, but the team is about to receive some of its biggest national exposure since it was formed in 1999.

The team’s mascot, Loco, PNG Field and Lakemont Park’s Skyliner rollercoaster will be featured on the cover of the June edition of Sports Illustrated.

“We feel very passionate that the Altoona Curve is something special,” Curve General Manager Derek Martin said. “We’re the second-smallest Double-A market in all of baseball, and for that team to be chosen to be on the cover is pretty cool, even if it’s for a bittersweet article.”

The story, written by Robert Sanchez with photos from Fred Vuich, details the struggles of Minor League Baseball due to the coronavirus pandemic and looming talks of contraction of teams that would potentially wipe out entire franchises.

“(Sports Illustrated) put out a survey to teams and our chief operating officer David Lozinak, and he decided to do the survey and send it to the rest of the staff,” Martin said. “We completed that, and they reached out to David and told him they had a photographer that lives in Pittsburgh. He made a trip out on a Tuesday when we were doing Curve Burgers in the parking lot to document everything we are trying to do for the community with baseball on hold.

“He also took some pictures of the ballpark, but we had no clue it was going to be on the cover. They let us know the pictures turned out fantastic. Loco’s charisma came out and provided for a good shot.”

Curve owner Bob Lozinak also had no idea his team had made the cover. In fact, he didn’t find out until he was contacted by the Mirror for a comment Tuesday afternoon.

“Anything that puts Altoona on the map is a good thing for the ballclub as well as the city,” Bob Lozinak said. “It feels wonderful to be on the cover. I’m driving in my car right now, and I’m lucky I didn’t have a wreck hearing that.

“We want to see Curve baseball again. Everybody loves Curve baseball. We’re just looking for brighter days ahead. When this is over, it will be like getting out of prison and going to a ballpark. It will be the greatest feeling.”

David Lozinak is quoted in Sanchez’s story speaking about financial concerns of all minor league teams and the lack of funds the franchises have to withstand a year without baseball.

“These are really the hardest days,” said Martin while he was enjoying Tuesday’s beautiful weather. “It’s great personally, because I have spent a lot more time with my family and kids. But professionally, these are very, very tough days. I catch myself calling the players and checking in and calling the Pirates’ staff. These are days you look out, and we should be playing a home game tonight. It’s a beautiful day. We know a nice day around here in April or May is hard to come by, so it makes it really tough.”

To date, Altoona has not been mentioned on any lists involving possible contraction, but that doesn’t mean the pandemic and discussions involving the future of the minor leagues hasn’t weighed heavily on the Curve staff.

“What’s going on is going to forever change the game,” Martin said. “Are we fortunate that our name has not been on any lists? Absolutely. But does that mean that we’ll never make a list? I haven’t seen a final list of teams. I know the negotiations are still going on. I don’t think anyone in the minor leagues feels like they are untouchable. That’s the scary part of it.”