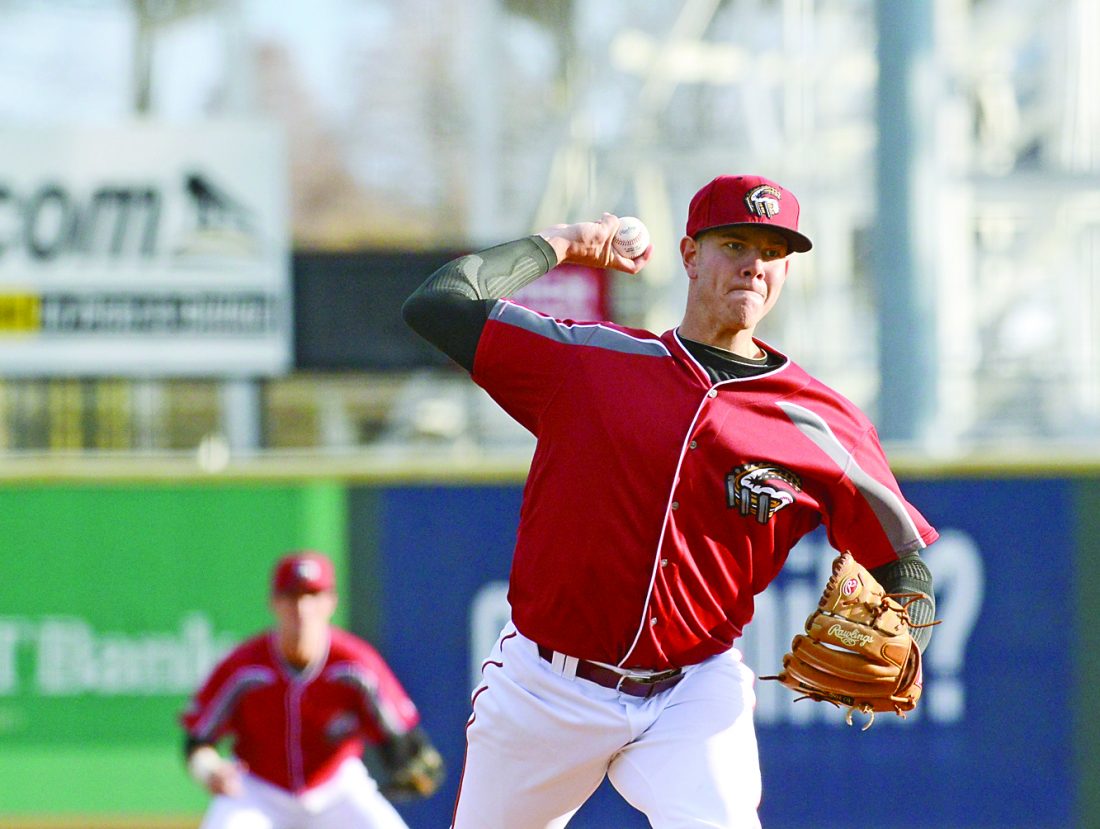 Mirror file photo Nick Kingham is now a starting pitcher in the KBO for the SK Wyverns.

The success hasn’t been too bad, either.

A fourth-round pick by the Pittsburgh Pirates in 2010, Kingham’s career as a starting pitcher never materialized in Pittsburgh, the right-hander being designated for assignment — and ultimately traded to Toronto for cash — last June.

But after signing with the Korea Baseball Organization’s SK Wyverns in November, Kingham has found success on the other side of the world and was to take the mound for the start of the KBO season on Tuesday.

“Pitching on opening day is a huge honor,” Kingham wrote during a recent email exchange with the Pittsburgh Post-Gazette. “To have the coaches, the front office and the entire organization believe in me, it means a lot.”

That belief has been good for Kingham, 28, who in five spring training games — plus intrasquad contests — had a 1.96 ERA with 19 strikeouts and just four walks in 23 innings, allowing 15 hits and just one home run during his introduction to Korean baseball.

Consistently on the roster bubble in Major League Baseball, Kingham has become a much bigger fish with the Wyverns after inking a $500,000 contract that also included a $200,000 signing bonus and a sturdy spot in the team’s starting rotation.

“Being in the KBO has a bunch of advantages,” Kingham said. “One of them is that I don’t have to worry about getting optioned or sent down. Once I’m here, I’m here to stay. … The stability and consistency of being with one team for an entire season was a huge factor.”

While Kingham has definitely struggled over the past two seasons in MLB, pitching to a 9-9 record with a 6.08 ERA in 43 combined appearances with the Pirates and Blue Jays, the 6-foot-5, 235-pound hurler actually finds himself with a tremendous opportunity.

The KBO was expected to attract plenty of eyeballs as it and the Chinese Professional Baseball League (CPBL) are the only two viewing options for those who love the sport. There will even be KBO games broadcasted live (if not late) on ESPN.

The coronavirus pandemic that has caused so many problems in the United States has lessened a great deal over there, with just eight cases in the entire country reported as of last Sunday.

Kingham and KBO players are prohibited from spitting or offering high-fives to teammates. Temperature checks are required to enter the ballpark. KBO players, coaches and team staffers are encouraged to wear masks in public, and there are no fans at games — for now.

The Wyverns are one of 10 teams in the KBO and play their home games in Incheon, South Korea, which is located about 18 miles west of Seoul.

If Kingham succeeds, he’ll continue a recent trend of Americans thriving with the Wyverns. Former Royals manager Trey Hillman led the Wyverns to their fourth KBO title in 2018, when they defeated the Doosan Bears in the Korean Series. Merrill Kelly pitched for the Wyverns from 2015-18 before making 32 starts with the Diamondbacks last season, going 13-14 with a 4.42 ERA.

Longtime Wyverns ace Kwang-Hyun Kim signed a two-year, $8 million contract (plus incentives) this past December with the Cardinals after going 136-77 over 13 seasons, including 17-6 with a 2.51 ERA in 2019.

Baseball-wise, it hasn’t been a huge adjustment, Kingham said. The biggest has been the amount of intent with which Korean players swing, which is indicative of a league where the strikeout rate was nearly 6 percent lower (23% compared to 17.2%) than Major League Baseball in 2019.

“Korean culture is, ‘If you are going to swing the bat, you better hit the ball,’ “ Kingham said. “So swings and misses are harder to come by than in the States.”

Another thing that has struck Kingham hasn’t even happened much yet — the fan interaction. While the KBO, like the CPBL, will be playing games in empty ballparks, Kingham seems eager to soak in the entire Korean baseball experience.

“Here, the fans have a huge impact on the game,” Kingham said. “They’re constant contributors and can definitely have an influence. We have cheerleaders and a cheer master to pump up the crowd. If a player hits a home run, the bigger the bat flip, and the more the fans love it.

“Fans are encouraged to submit videos, and they get shown on the scoreboard during the game. It’s a cool connection that the fans are able to have with the players.”

Kingham’s story in Pittsburgh is similar to that of Tyler Glasnow — a talented pitcher the former Pirates regime could never quite figure out, though injuries certainly didn’t help.

Baseball Prospectus ranked Kingham as the game’s 67th-best prospect entering the 2015 season, but a couple months later, he had Tommy John surgery. After working back from that and an ankle injury in 2017, Kingham made his MLB debut on April 29, 2018, at PNC Park against the Cardinals.

Kingham dazzled in that game and was perfect through 62/3 inning before Paul DeJong’s ground ball single ended the rookie’s bid at history. The rest of the year wasn’t quite as magical, as Kingham pitched to a 5.21 ERA over 18 games, including 15 starts.

The results definitely weren’t there for Kingham in 2019, when he had a 9.87 ERA in 342/3 innings before the Pirates finally pulled the plug. But Kingham, to his credit, feels like he’s learned a lot about himself and has seemingly matured as a pitcher.

“I’m perfectly equipped, with the weapons that I have, to get hitters out,” Kingham said. “I’ve learned that is all I need: trust myself and trust my abilities.”

It’ll be a neat experience for Kingham and his wife, Logan, after the couple married in November 2019. While many other American players — KBO teams are each allowed three — were either sent home or chose to leave during the initial COVID-19 outbreak, Nick and Logan Kingham stayed.

The move allowed Nick to continue working out while other American players had to re-quarantine upon returning to South Korea.

“I think if most people had to go back and do it over, they would have elected to take the route that I did,” Kingham said.

Most certainly wouldn’t choose to go the route Kingham has gone with his career, which has included pretty much every conceivable experience. And now, he’s looking to embrace this next journey and see where it takes him.

“Sometimes things just don’t work out the way you want or expect them to,” Kingham said. “But with one door closing, another opportunity rises and allows me to have a different, if not better, situation here.

“It’s not the path I saw myself going through, but if I would have stayed in the U.S., the start of my season would still be unknown. I’m perfectly happy with how things have played out.”