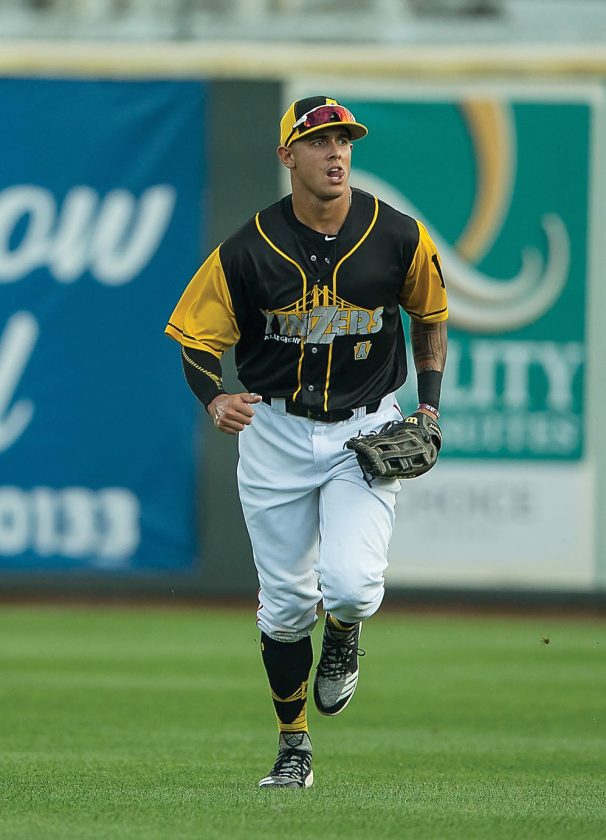 Photo for the Mirror by Rob Lynn Curve outfielder Bligh Madris wears the Yinzers jersey for the final time Thursday.

One of the hottest trends in the promotion-crazed business that is minor league baseball is teams rebranding themselves for certain theme nights during the season.

Most teams change their names to something witty or to a local food item that’s popular. But when the Altoona Curve decided to rebrand itself for a few nights during the 2019 season, the route they wanted to go was much different.

“We knew that as a staff, we wanted to try something totally different that we’ve never done before,” Curve general manager Derek Martin said. “We never thought about changing the Altoona Curve name because it’s such a strong name, but we thought it was time to throw something out there.”

While Martin said that there is a rich pool of food items to choose from in the Altoona area, what they ultimately landed on was something that touched everyone that grew up from Central Pennsylvania all the way to Pittsburgh — the Allegheny Yinzers.

When the name was pitched in a weekly creative meeting during the offseason, everyone from front office staff to ownership to Curve manager Michael Ryan was on board.

“It kinda just clicked,” Martin said. “We wanted to do something to pay tribute to our 21 year affiliate to the Pittsburgh Pirates. It was kind of a team collective idea and we just ran with it.”

And so, the Curve became the Yinzers for seven nights during the 2019 season, the last of which was held on Thursday night and concluded with a jersey auction that raised nearly $3,000 for the Roberto Clemente Foundation.

“Roberto Clemente is an icon,” Martin said. “Anytime we can pay tribute and help with what they’re doing for youth baseball. We were happy that they offered to come out.”

Roberto Clemente Jr. was in town for the final Yinzer night and threw out a ceremonial first pitch.

“Having Roberto (Clemente) Jr. here — he’s been to Altoona three or four times over the past few years — it meant a lot to us that they would make the trip to come.” Martin said. “This isn’t the only thing that you’re going to see over the next couple years with the Roberto Clemente foundation.”

Martin also mentioned that the Curve will be collecting bats, gloves and other baseball equipment that will be donated to the Clemente foundation. Equipment can be dropped off at the front office at Peoples Natural Gas Field up until Tuesday at 5 p.m.

The Allegheny Yinzer theme certainly ignited the passion within the residents of Central and Western Pennsylvania. Ryan, who was born and raised in Indiana, Pennsylvania, was a huge fan of the idea from that start.

“I thought it was just an unbelievable idea,” Ryan said. “Being a Pittsburgh guy, I was so excited. It was awesome to have those nights to support the black and gold and what Pittsburgh’s all about. It meant a lot to me.”

While Ryan said he hasn’t become a full-fledged ‘Pittsburgh Dad’ like the character created by Curt Wooten, who made an appearance at a Yinzer night in June, the Western PA in him does come out during Steelers games.

“Steeler games I get pretty Yinzer. I may get thrown out of the game tomorrow so I can check (the first preseason game) out.”