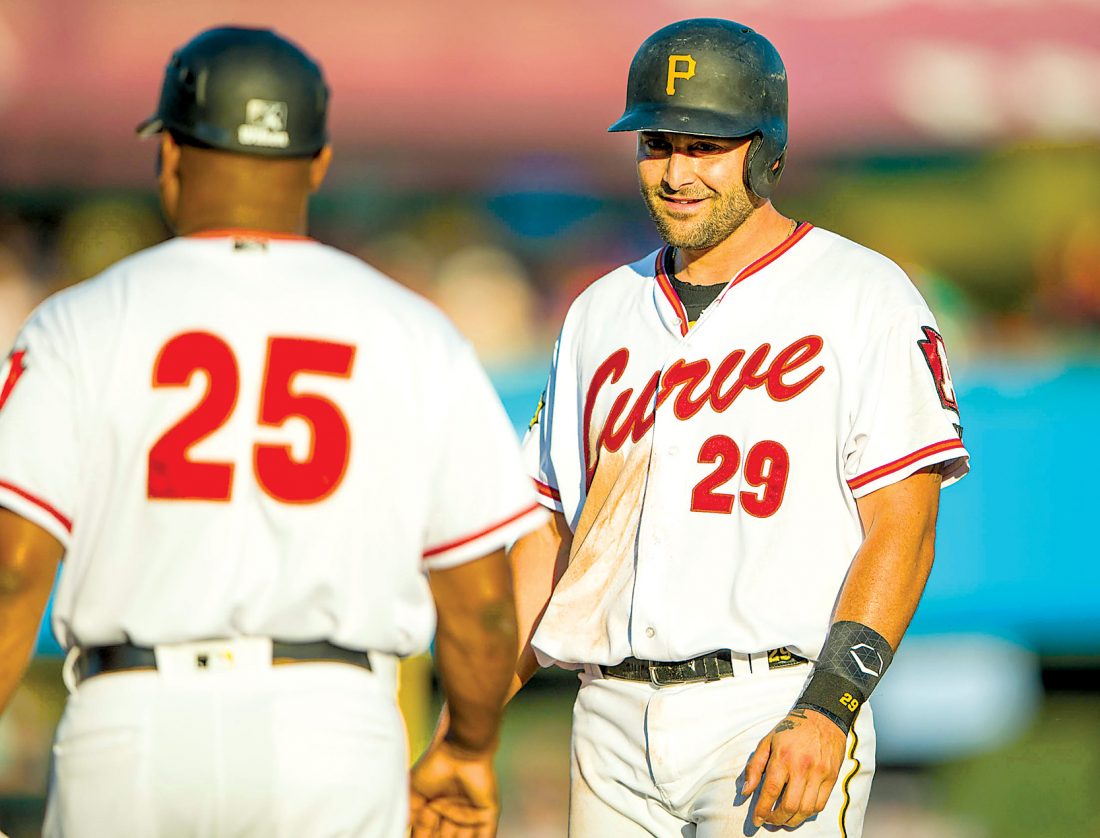 Francisco Cervelli had such a blast finally getting to play baseball again Sunday night after missing 78 days with his latest concussion.

“Like I got called up for first time in the big leagues, that’s how I felt,” Cervelli said with a big smile following his lone rehab game with the Curve. “To be able to play again after almost 80 days of doing nothing is, I feel very lucky. I played today like it was the last game of my life.”

There was a brief pause, then Cervelli made sure to add, “But it’s not.”

No, the 33-year-old Cervelli doesn’t want to see his baseball career end any time soon, even after suffering a reported six concussions over the years.

And yes, he wants to continue catching.

Despite a heavily scrutinized report last month in which Cervelli indicated he was done catching.

“I’m not a baseball player, I’m a catcher,” he said. “That’s it. Everything else is boring for me.”

This is the final year of Cervelli’s contract with the Pirates, so he’ll be a free agent this winter. Wherever he signs — if he signs — he wants to catch next season.

The big question, though, is this: Why?

Why would Cervelli want to continue to put his brain, his body and long-term health at risk by continuing to play the most dangerous position on the baseball field?

“Well, because we did everything, all the tests and all, everything that we were able to do,” he said. “I don’t have any problems in my brain, I don’t have any little things there that can affect me later. I did something new (coming back from this concussion), and I think I’m able to handle it now in a different way.

“I’m focused just to play this year, finish this year. Next year is a mystery always. So I’m going to enjoy this year, and I want to be able to let other teams (know) that I can catch, that I can do what I know, and good.”

But what about the long-term risks of the concussions he’s already suffered, and others he potentially could endure?

Does he worry about all of that?

“I used to,” Cervelli said. “But not anymore. It was a lot (of) psychological thing and change the mentality about little things and feeling better every time, and it gives me more motivation to do it. Of course, I want to be good long term. I want to have my family — that I don’t have (yet) — and I’m going to be very careful about this. This time I’m going to be very honest if something happens.”

Much was made last month after a Pittsburgh reporter, Dejan Kovacevic, wrote that Cervelli had told him he was done catching.

“That’s enough. This time is different. I can’t live like this,” Cervelli was quoted as saying.

Cervelli, though, came out and denied saying he was done catching, even while Kovacevic steadfastly stood by his original reporting.

What really happened in their conversation is known only by those two men.

What might have happened is that Cervelli, in a moment of frustration, said something in haste, not grasping how it all would be perceived.

As a looming free agent, Cervelli’s only real value on the open market is as a catcher. If he wants to play in the major leagues next year, he really only has one choice, which is to be behind the plate, because teams probably won’t be looking to sign him to play first base or anywhere else.

For now, Cervelli has a little less than two months to show teams that he can still be a viable catching option for next year.

Still, he said he doesn’t believe he has to prove anything at this point in his career.

“I cannot live my life trying to prove to people that I’m good or not,” Cervelli said. “They all know what I can do. They all know if I’m good catching or not. So I’m going to do my part. If they want it, if somebody wants to sign me, good. If not, I’ll be happy with myself because I gave everything that I’ve got.”

Cervelli was in a glorious mood during his rehab game with the Curve. He was laughing and smiling the whole night, making fun gestures at his minor league teammates — he did a Hulk strong man flex after a great diving play by second baseman Mitchell Tolman — and looked like he was having a lot of fun.

After all he’s been through the past few months, there were times when he wondered if he ever would be able to play the game again.

“Of course, because the feeling that I had was bad,” he said. “Today, I feel lucky, and I’ve got to be grateful for every opportunity that I get in life to do what I like to do. Today, I didn’t come here to mess around. I came here to win a game and to help those guys. That’s it. That’s what I do.”

Cervelli has played 34 games for the Pirates this season, hitting .193 with one homer, five RBIs and a .526 OPS before the concussion. He took several blows to the head even before the one that sidelined him.

How bad were things as he tried to battle through all that?

“When you have concussion, you cannot hit. It’s impossible. It’s impossible,” Cervelli said. “You guys saw it. I was hitting nothing. I was getting hit all the time since spring training, and I didn’t take care of that the right way. So I wasn’t able to coordinate or do things the right way. So now, I feel I can do it. Like today, after 78 days, I saw the ball really good, and it feels amazing.”

Cervelli’s luck has been terrible throughout his career when it comes to getting hit in the head — either by balls or bats. During Sunday’s game, he got hit by a pitch, but the good news is it was a slow curveball that got him on the hip.

Cervelli hit one long fly ball to the left field warning track in the fifth inning, and the left fielder camped directly underneath it but dropped it for an error. However, after the game, a switch was made on the official scoring.

Curve left fielder Darnell Sweeney had dropped a fly ball for an error in the first inning, but through some politicking, a decision was made to give Cervelli a double on his ball as long as the Reading player got a hit on his.

Cervelli laughed as he strolled into second base on his — ahem — hit.

“Today you saw the passion that he has for the game, the appreciation that he has to be able to get back onto the field,” Curve manager Michael Ryan said. “From the minute that he showed up, the energy that he had, the way he wanted to work and the way he was excited to play, it was just refreshing.

“I’ve missed time like that, and when you’re coming off an injury, the first day back it’s excitement and it’s the realization of how fortunate you are to play the game because it can be taken away from you.”

Cervelli now will head to Triple-A Indianapolis to continue his rehab assignment. He’s hoping to rejoin the Pirates in a week or so, although that may not happen until the rosters expand Sept. 1.

“Baseball has been almost my whole life. I don’t know anything else,” Cervelli said. “My blood is still boiling. It’s hot. I want to be up there. So today catching for me was amazing.

“I’m going to enjoy every moment here in minors, too, because probably it’s going to be the last time I come to Altoona,” he added. “I did enjoy it very well. The fans are always great, and I’m grateful for that.”