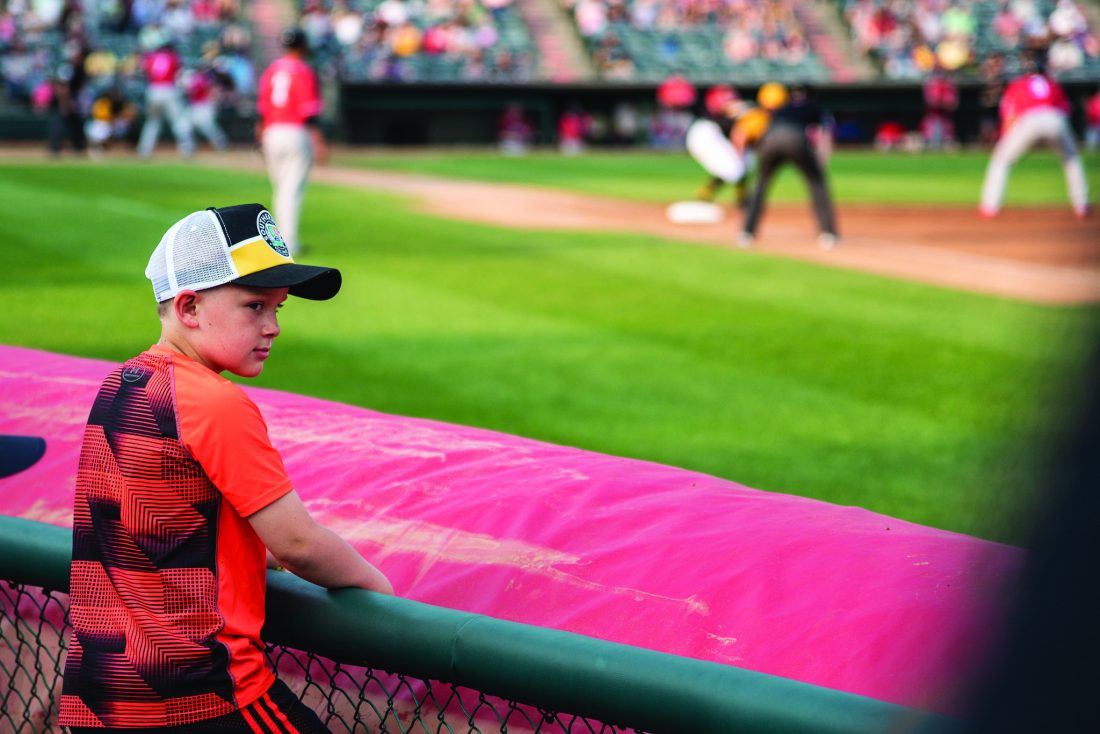 It happens so fast. Lightning fast.

Even if you’re paying close attention at a baseball game, it can be tough to avoid getting hit by a screaming foul ball aimed at you in the stands.

And we all know, not everyone is paying close attention. Many people are looking at their phones, eating, getting lost in conversation, dealing with their kids. For those folks, there’s no way to avoid getting drilled by a hard-hit ball coming right at them.

Unless there’s a net.

“I know for a fact that, personally, if my family comes to a game, I’m making sure that they’re behind the net,” Curve manager Michael Ryan said.

Ryan has seen first hand — many times — in his long career the scary scene that plays out when a baseball gets launched into the stands and hits a fan hard enough to cause injury.

“When you see those types of things, it just makes you sick to your stomach,” he said.

One such high-profile incident occurred Wednesday night in Houston, when a 4-year-old girl was struck by a foul ball. Albert Almora Jr. of the Chicago Cubs hit the ball, and once he found out the young girl had been injured, he broke down in tears on the field and had to be consoled by teammates.

There’s still no official word on how the girl is doing or specific injuries she suffered. Her family has declined comment.

The situation has, however, sparked a national discussion about what can be done to protect fans from getting hit and hurt by foul balls at games.

Almora’s teammate with the Cubs, star third baseman Kris Bryant, said there “absolutely” should be fencing up around the entire field to protect fans.

“Any safety measure we can take to make sure fans are safe, we should do it,” Bryant said during the telecast on ESPN.

Two years ago, here in our own backyard, the Altoona Curve made a fantastic move by extending the protective netting farther down the first and third base lines at Peoples Natural Gas Field.

Prior to June of 2017, there was no netting to protect fans sitting directly behind the dugouts. Those areas were essentially target zones for hard foul balls that could do serious damage in the blink of an eye.

It wasn’t just baseballs, either. Bats — be it either a broken one or if a player let loose of one on a swing — were just as dangerous, if not more so.

“It’s the broken bat that you worry about,” Curve general manager Derek Martin said. “When it breaks, it can hurt someone — bad.”

The Curve’s answer to protect fans was to extend the netting. They weren’t the first minor league team to do so, but they were foreword thinking enough to be among the first to make the hugely necessary change.

Many other teams have followed over the past two years. And many, many more will continue to follow.

It makes the ballpark drastically safer, as the Curve have found out over the past two years.

“I get a lot of comments from the fan base that thank us for doing that because they feel a lot safer bringing their family to games,” Martin said. “It takes one kid to get hit to mess everything up, and that’s not the chance we’re willing to take.”

Ryan, in his third season managing the Curve, agrees PNG Field is much safer with the extended netting.

“It’s such a family oriented place here that I’m glad they extended the nets,” he said. “People are here to have a good time and watch a game, and sometimes people are having conversations and not watching the game. So it’s good those people are protected close, especially over the dugouts.”

Ryan said during Friday night’s game “there would have been three balls that could have been very dangerous if we didn’t have the extra netting.”

Martin says the number is even higher for an average game.

“I would say you’re looking at probably eight to 10 a game that (the net) is saving,” the GM said.

Joshua Castle from Indiana, Pa., brought his wife, Julie, and young sons Nathaniel, 7, and Noah, 5, to a Curve game for the first time Friday night. They sat behind the third base dugout, protected by the net, and that’s the only way they would have had it.

“I was very relaxed because of the netting,” said Dr. Castle, who teaches sport management at IUP.

He didn’t know there was netting to protect the seats when he bought the tickets. If there had not been a net when they arrived, Castle said he would have asked to change sections.

“I pay attention to a lot of the game, but it’s hard to pay attention when you have kids because they’re running around and stuff,” Castle said. “And moving around — hey, I’m giving them a hot dog, or we got ice cream spilled — I can’t keep track of them and what’s going on with the game at all times.

“If you’re not paying attention to the game 100 percent, which is hard to do with a 5- and 7-year-old, you’re not going to be able to protect them.”

There are some fans who do not want to sit behind a net. They just don’t like it. They believe it obstructs their natural view of the action on the field.

When the Curve extended the nets, Martin said a handful of season-ticket holders complained. The team obliged and last year moved seats for eight fans who simply didn’t want to be behind the net.

I spent a good bit of time the past two nights walking around the ballpark during Curve games and talking to people about this subject. There were about a half-dozen people who told me flat out they don’t want to sit behind the net.

“I’ll take my chances; I pay attention,” one ballpark regular who asked not to be identified said when asked if he’s concerned about his safety when not behind a net.

That’s fine and dandy. Until the guy, or someone he knows and loves, gets hit hard enough by a foul ball that it causes an injury.

Because until something bad happens to you or someone you love, it’s hard to think about things differently.

Ryan was blunt about it.

“I’ve sat at baseball games, and I don’t even notice the net at times behind the plate. I’ll definitely take protection for my family over distraction of a net.”

The Associated Press PITTSBURGH — Xavier Johnson could have chosen a cliche, something about how no one game is ...

Glendale has three alive in medal round

NEWTOWN — Glendale has three wrestlers still alive to take the medal stand when wrestling resumes today at the ...

LORETTO — An ugly scene that thankfully stopped short of a brawl played out at the conclusion of Saturday ...