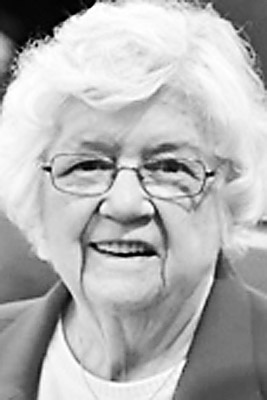 Zita A. Milliron, 94, Altoona, passed away Thursday at her home.

She was born in Altoona, daughter of the late George and Lilly Margaret (Schell) O’Friel. She married John H. Milliron at St. Leo’s Catholic Church, and he preceded her in death on March 17, 1980.

Zita was a graduate of Altoona Catholic High School and Mercy Hospital School of Nursing where she received her license as a registered nurse. She started her nursing career by taking care of her three aunts, “The O’Friel Girls:” Margaret, Celia and Elizabeth. After their deaths, she returned to her nursing at Mercy Hospital then moved on to becoming an industrial nurse until Garvey Manor Nursing Home persuaded her to take a position as their first nursing supervisor. She then continued her nursing with the Pennsylvania Railroad as a surgical dispensary nurse. Upon her husband’s death, she joined her son, Jerry, in expanding the Milliron Accounting business, and remained active in the business until her passing.

Zita loved her God, her church and her family. She had a special devotion to The Blessed Mother and devoted her life to helping others.

Friends will be received from 2 to 8 p.m. Sunday, Nov. 10, 2019, at The Stevens Mortuary Inc., 1421 Eighth Ave., Altoona, where a vigil for the deceased will be held. A funeral Mass will be celebrated at10 a.m. Monday, Nov. 11, 2019, at Sacred Heart Catholic Church, her nephew, Father Clement Gardner celebrant, followed by committal at Calvary Cemetery.

The family requests, in lieu of flowers, memorial contributions in Zita’s memory be made to Sacred Heart Catholic Church, 511 20th St., Altoona, PA 16602.