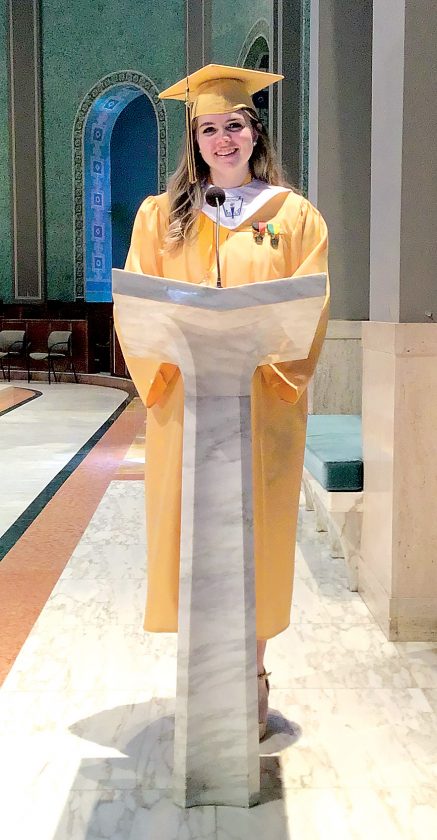 A private YouTube link to the virtual graduation was to be sent to students and parents this morning, according to Assistant Principal Mike Cacciotti. It will be shown on public access in June.

“The school is extremely proud of our Class of 2020. They achieved a 95% attendance rate even after classes moved online. They maintained a positive attitude and have proven to be a resilient and cohesive class,” he said.

Senior Class President Giana Georgiana performed the traditional turning of the tassel during videotaping held at the Cathedral in Altoona on May 4. Remarks by Valedictorian Amelia Morning and Salutatorian Mary Shanoudy also were recorded. Starfleet Productions of Altoona created the virtual ceremony at a reduced rate for the school, Cacciotti said.

“All the individual shots were edited together to simulate a typical graduation ceremony. BG wants the students to have some sense of normalcy and a milestone cap to their high school career,” Cacciotti said. 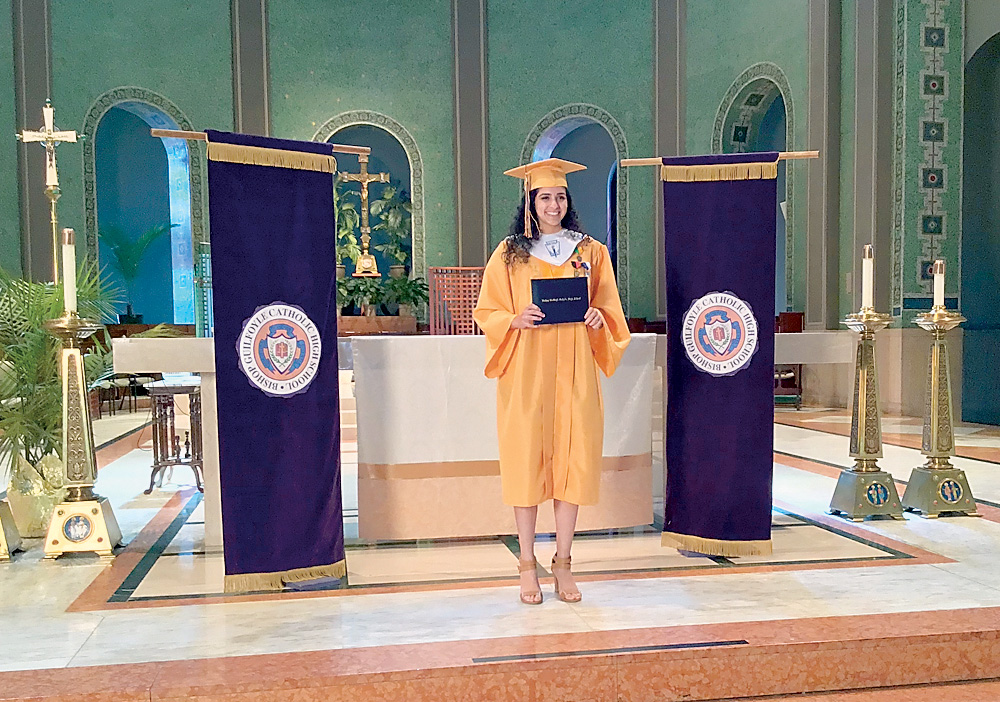 Bishop Guilfoyle Catholic High School salutatorian Mary Shanoudy poses with her diploma during a prerecording of the school’s graduation ceremony at the Cathedral of the Blessed Sacrament. Starfleet Productions of Altoona created a virtual ceremony that will be livestreamed this morning. Courtesy photo

Giana, daughter of Lisa and John Georgiana of Hollidaysburg, praised BG administrators, faculty and staff for their efforts during remote learning since March and for the digital graduation ceremony.

“Our staff and our faculty are doing such a great job to keep it as normal as possible through this,” Giana, 18, said. “It shows how much they care about our well-being and shows how we are a community and a little family.”

Giana’s mother, Lisa Georgiana, said that during the past several weeks she would ask her daughter how she was coping with social isolation and the absence of milestone senior year events.

“She would look at me and say, ‘I’m fine. Are you OK?’ This generation is so resilient. They are the babies born during or right after 9-11. I had Giana two months after 9-11. They are very resilient and will come through these surreal times. If you can get through this, you develop a confidence that no one can take away from you. It’s disappointing not to have the live graduation, but we have to make the most of the situation.”

Senior Brady Bithell, son of Ben and Julie Bithell, called the virtual graduation, “better than nothing. … I’m trying to have a positive perspective.”

He also praised his teachers and admitted to having a touch of senioritis.

“We’ve still been learning new stuff the last several weeks,” he said. “I’m ready to be done and to move on.”

Parents have planned a class viewing party at the Portage Drive-In on June 4. Students will have to stay in cars and practice social distancing measures, Lisa Georgiana said.

“I’ve talked to some friends, and we’re really excited to be able to watch it together,” Giana said. Parents also hope to host a party or prom event later in the summer provided restrictions are lifted.

The drive-in isn’t charging to hold the viewing party at their venue, she said, adding that it is an example of how troubled times bring out the best in people.

Each BG student was afforded the opportunity to record a farewell remark to classmates. Giana said, “I said something along the lines of ‘I wouldn’t want to change anything. I wouldn’t want to graduate with anyone else.'”