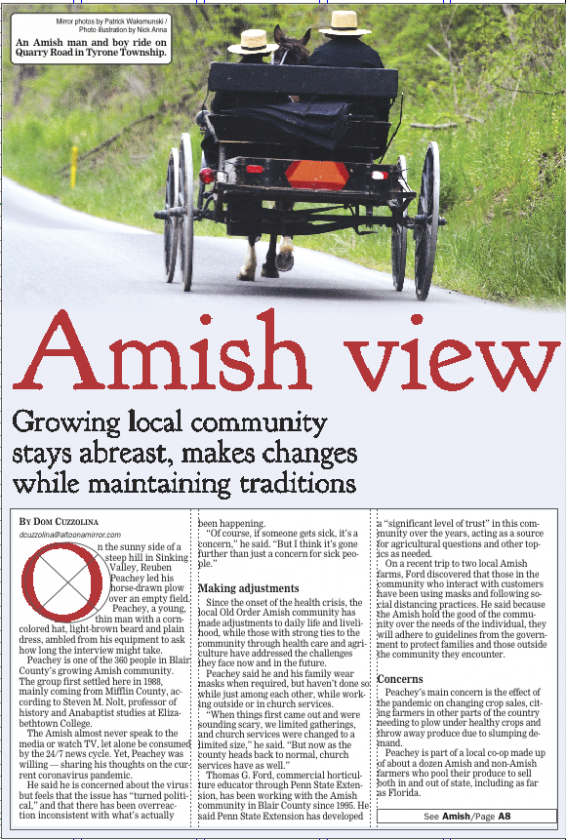 On the sunny side of a steep hill in Sinking Valley, Reuben Peachey led his horse-drawn plow over an empty field.

Peachey, a young, thin man with a corn-colored hat, light-brown beard and plain dress, ambled from his equipment to ask how long the interview might take.

Peachey is one of the 360 people in Blair County’s growing Amish community. The group first settled here in 1988, mainly coming from Mifflin County, according to Steven M. Nolt, professor of history and Anabaptist studies at Elizabethtown College.

The Amish almost never speak to the media or watch TV, let alone be consumed by the 24/7 news cycle. Yet, Peachey was willing — sharing his thoughts on the current coronavirus pandemic.

He said he is concerned about the virus but feels that the issue has “turned political,” and that there has been overreaction inconsistent with what’s actually been happening.

“Of course, if someone gets sick, it’s a concern,” he said. “But I think it’s gone further than just a concern for sick people.”

Since the onset of the health crisis, the local Old Order Amish community has made adjustments to daily life and livelihood, while those with strong ties to the community through health care and agriculture have addressed the challenges they face now and in the future.

Peachey said he and his family wear masks when required, but haven’t done so while just among each other, while working outside or in church services.

“When things first came out and were sounding scary, we limited gatherings, and church services were changed to a limited size,” he said. “But now as the county heads back to normal, church services have as well.”

Thomas G. Ford, commercial horticulture educator through Penn State Extension, has been working with the Amish community in Blair County since 1995. He said Penn State Extension has developed a “significant level of trust” in this community over the years, acting as a source for agricultural questions and other topics as needed.

On a recent trip to two local Amish farms, Ford discovered that those in the community who interact with customers have been using masks and following social distancing practices. He said because the Amish hold the good of the community over the needs of the individual, they will adhere to guidelines from the government to protect families and those outside the community they encounter.

Peachey’s main concern is the effect of the pandemic on changing crop sales, citing farmers in other parts of the country needing to plow under healthy crops and throw away produce due to slumping demand.

Peachey is part of a local co-op made up of about a dozen Amish and non-Amish farmers who pool their produce to sell both in and out of state, including as far as Florida.

Peachey said because he only has about four to five acres, it’s more viable to pool resources for wholesale.

“The market for produce is drying up because restaurants and schools have been closed,” he said. “We’ve shifted from wholesale to selling to the local market.”

He said there are benefits to selling locally, but they will wait to see what sort of changes may take place by Aug. 1, when their produce (mainly winter squash) is consolidated and stored for later distribution.

Amish economies are driven by manufacturing or agriculture — usually with one being more predominant than the other, according to J.P. Miller, 29, who grew up in a Lancaster Amish community and has family here.

Miller has since left the order to pursue higher education and is now a first year Ph.D. student in the sociology department at Penn State University.

He described the local community as more agriculturally driven than those he grew up in and around, meaning the society is more conservative, with less economic dependence on non-Amish markets.

However, he explained that one major point of contact to the outside community are those Amish who use “drivers,” or trusted non-Amish to drive them distances where horse and buggy would be impractical.

In addition, Amish are still in contact with non-Amish who visit produce stands to buy their goods.

Ford expressed concern for the Amish who come in contact with others that may not follow social distancing guidelines, which he said puts the entire local Amish community at risk. He noted there is a lack of accurate information reaching the local community from non-Amish sources.

Ford said efforts by the CDC and the Department of Health were largely web-based or through the media, while most information passes through the Amish community through plain-sect newspapers, circuit letters, group conference calls and word of mouth from Amish and non-Amish alike.

“This will include a fact sheet, which our nurses will share with community leaders to make sure that communities are prepared,” it said. “We also are working with several physicians and health systems that work closely with the Amish community that are assisting in providing information to the leaders of the Amish community.”

It said the responsibility to disseminate this information rests on both the DOH as well as other local partners with whom it may share information.

County commissioner Bruce Erb said there not a direct line of communication with Amish or Old Order Mennonite communities at the county level, and the county has not shared information about the virus with Amish people in Sinking Valley.

“The Amish community is more known for taking care of their own, although we would be happy to offer any assistance if needed,” Erb said.

Ford said Penn State Extension distributed about 30 copies of CDC and department of health materials on March 17. His team also worked with the Pennsylvania Office of Rural Health, which developed an in-depth press release on COVID-19 for various plain-sect media outlets.

“There are certain individuals within some of the state and federal agencies that work with the Amish, but in most cases county agencies look to Penn State Extension to gain access,” Ford said.

One agency with strong trust in Amish communities throughout the region is the Central PA clinic in Belleville, which offers medical care to Amish people with genetic diseases, and now does testing for COVID-19.

Dr. Holmes Morton, founder of the clinic, said most of the information on the disease for the Amish is now coming from health care providers. Morton published information on the outbreak in Amish newspapers advocating for social distancing.

According to multiple sources, there have been no reported cases in the local Amish community. However, at least one outbreak has occurred involving 19 Amish and Mennonites from Lancaster and Juniata counties, according to a report by Morton.

He added, however, that some may opt to die at home instead of seeking treatment. He said in addition to a reluctance to seek treatment, another challenge is doing follow-ups with Amish people after tests.

“All of public health efforts to follow up on positive tests have been done through telephone,” Morton said. “Plain people that we work with don’t have or answer telephones, which makes the Department of Health calls impossible.”

Morton also expressed his concern about immunizations. Amish people may be reluctant to receive a vaccine for the coronavirus when it is developed.

“I’ve been after the (Amish) community for the need of immunizations and preventive measures,” he said. “I can’t get them to get flu shots or rubella shots or polio shots.”

Miller acknowledged that while some Amish are “anti-vaxxers,” most are simply uninformed as to the benefits of vaccines and the accepted infant vaccination schedule. He said he had to get vaccinated when he decided to attend college.

“I received my basic first round of infant vaccinations at a local fire house (medical clinics sometimes provide vaccinations at local fire halls specifically to try to vaccinate Amish infants),” he said. “However, I never really received any after that, at least in my medical records, so I had to get so, so many shots in college.”

According to a 2017 article from the American Academy of Pediatrics, roughly 92% of the Plain children in an institutional study were not vaccinated compared to 17% of the non-Plain children. It says this has caused “significantly higher rates” of hospitalizations for vaccine-preventable diseases.

Miller said health care access is not an issue for Amish people, but described his own health education in his Amish schooling as “very basic,” including not much more information than standard hygiene practices like hand-washing.

He added that education on the topic has improved since his primary schooling.

Miller said past crisis have had an impact on Amish people’s relationship and trust with the broader population.

“The sense I got was that (the 9-11 attacks) forged some connections between the Amish and the rest of the world,” he said. “In reverse, would be the Nickel Mines shootings.”

The Nickel Mines shootings took place in 2006 when a gunman shot 10 Amish girls in an Old Order schoolhouse, killing five.

He wasn’t sure how this health crisis may impact that relationship in the long term, but said one outcome could be turning away from reliance on outside money.

“In the past decades, the Amish have become much more reliant on the outside communities,” he said. “However, they have their own sub-economy, so it could lead to turning back to more traditional means.”

An Altoona man is accused of trying to pass a bogus $100 bill and then giving police three fake names. Mitchell ...