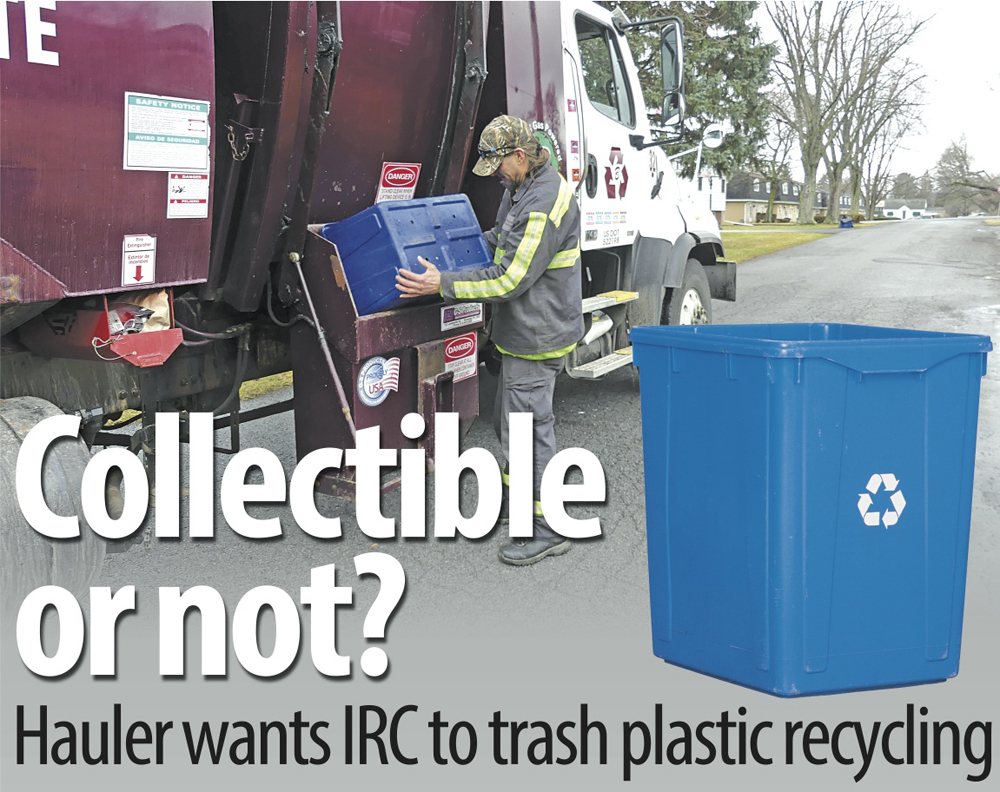 The organization that oversees state-mandated recycling in three Blair County municipalities has instructed its executive director and solicitor to meet with the managers of those municipalities to craft potential policy adjustments in response to recent complaints from one of the area’s largest haulers.

The changes to be considered include:

Eliminating plastic as one of the materials that must be collected at curbside.

Enforcing recycling requirements on haulers hired by brokers for chain stores and restaurants.

Advocating for a state bottle bill.

Over the last couple of years, since China stopped accepting recyclables from the U.S. due to wholesale contamination, the market for recyclables has collapsed, especially for plastics, said Burgmeier, whose firm collects trash and recyclables and also operates a transfer station for both kinds of materials to serve other local haulers — with a processing center to sort and bale those recyclables for shipments to materials recovery facilities.

Plastic recyclables have gone from fetching $125 a ton at MRFs to costing Burgmeier $10 a ton to offload them at those plants, Burgmeier said.

“If plastic is such a pain, why not suspend it for now?” asked board member Jim Patterson.

Eliminating plastics as a collection requirement would save him money, according to Burgmeier.

He frequently sees evidence of that failure to recycle in the single dumpsters — for trash only — on those chain store properties, Burgmeier said.

The IRC has been letting it happen, he said.

The contracts offered by the brokers invariably don’t require haulers to recycle, so the haulers don’t recycle when they sign up to provide service, he said.

If his firm offers to provide recycling when he bids for such contracts, the additional work recycling involves requires him to add to his bid prices, putting him at a disadvantage, he indicated.

“Level the playing field,” he said.

The IRC should also prohibit single-stream collection of recyclables, as practiced by some haulers, because the heavy contamination in their deliveries to his processing facility is problematic, Burgmeier said.

The materials generated by single-stream recycling — where all materials go into a single bin — is “not a quality product,” he said.

His own household hauling service collects paper products separately from bottles, jars and cans on separate weeks and thus keeps those classes of materials separate during their transport to his processing facility, he said.

A bottle bill, as enacted by some states, could help eliminate the plastics problem, because consumers would pay a deposit — maybe 5 cents per bottle — redeemable upon the bottle’s return to a redemption center, providing an effective recycling incentive, Burgmeier told the board.

He’s spoken of the benefits of such a law to at least one local lawmaker, he said.

“Over the years, we’ve been reluctant to add or subtract,” Frederick said. “It’s a public education nightmare.”

The move more than 10 years ago that allowed lids on plastic bottles to be recycled is illustrative of the issue, he said.

“I can’t tell you how many people there are who still think you’re supposed to take the lids off,” he said. Clearly, the proposed elimination of plastics would create “an education problem” — especially if the IRC follows through and then wants to reverse itself again, said board member Jim Patterson.

But given the current problems, it might be worthwhile “to take our chances, then re-educate,” Patterson said.

The recycling industry, especially for plastics, is in “turmoil” due to China’s “green fence,” which can help justify questions like the IRC’s about whether to eliminate plastics, said Pete Previte, recycling markets development manager for the Pennsylvania Recycling Markets Center.

But there are promising signs that the domestic market is improving — including the ongoing construction near Reading of a materials recovery facility for transforming clear plastic water and soda bottles into pellets that can be transported to a nearby bottle manufacturing plant, Previte said.

China is also expected to be accepting of such clean recycled feedstock, he said.

So it might be better to hold off, he indicated.

Altoona may be close enough to ship its recycled bottles to the new MRF near Reading, expected to open soon, he said.

Actually, clean plastics from Altoona — Nos. 1 and 2 plastic bottles and jugs — should be marketable regionally even now, according to Previte.

Suppliers shouldn’t have to pay to get rid of the stuff, if the quality is good enough, he indicated.

“I don’t know where the disconnect is,” he said.

The state solid waste law, Act 101, requires municipalities mandated to operate curbside recycling — like the IRC municipalities — to pick up at least three materials at least once a month, Frederick said.

In the 1990s and 2000s, that outlook led to the passage of guidelines that called for collection not only of plastic bottles and jugs, but also clear, brown and green glass bottles, aluminum and tin cans and cardboard, Frederick said.

Before he left the organization during the first half of 2019, he gave preliminary notice to a national hauler that operates single-stream recycling in the area that contamination levels were not meeting standards set in the local ordinances and guidelines.

That contamination had approximately reached a trigger point of 20 percent, Frederick said.

Previously, the IRC had OK’d single-stream for that company via a processing agreement for its transfer station in Altoona, based on the company’s Pittsburgh sorting and baling facility, which was well-run, with contamination levels that were then comparable to those of a dual-stream facility that received paper products separated from bottles, jugs and cans, Frederick said.

Regardless of those previous good results, single-stream recycling is “inherently” prone to contamination, he said.

It’s a problem “at every stage” — when households and businesses gather the materials and place it out, when haulers pick it up and deliver it, when sorting and baling facilities handle it, when MRFs receive it, Frederick indicated.

Contamination comes from liquid saturating paper and from glass breaking and mixing with paper, plastics and cans, according to Frederick.

Few jurisdictions in Europe run such programs, she said.

Although he’s had disagreements with Burgmeier over the years, Frederick is also sympathetic to the hauler’s frustration with brokers and their contracts with local haulers to service chain outlets.

The national brokers advertise for bids on one-size-fits-all contracts that don’t include recycling because the brokers don’t care about local requirements, Frederick said.

Haulers who may be willing to recycle — at least cardboard, for instance — are at a competitive disadvantage, Frederick said.

Still, “it’s interesting that the IRC would be blamed for this,” he said.

The organization tried to correct the broker problem by inviting local haulers to notify the IRC when they were hired to provide trash services to chain outlets that were not receiving recycling services, so the IRC could attempt to correct the problem, Frederick said.

The intention was to follow up in order to nudge the offending outlets into compliance, he said.

But only one hauler sent a total of two or three reports several years ago, he said.

“It was clear we would never get the cooperation we needed from haulers to pursue this in the manner that was needed,” Frederick said.

There was at least one enforcement success, however, involving a national chain that responded to an IRC notice of violation by subscribing to a mail order service for commingled containers, Frederick said.

That chain’s local stores placed cardboard boxes out for recyclables, then, when those were full, mailed them to the recycler for processing, he said.

It wasn’t very efficient, but it was acceptable to the IRC, he said.

The IRC’s problem with brokers is a little like the city’s Department of Codes and Inspections’ problem dealing with absentee landlords, Frederick said.

Frederick and Collins are both advocates for a container deposit law.

The biggest benefits of such programs are “dramatically higher recycling rates” — two to four times higher than for regular municipal programs, Collins said.

The materials collected through container deposit laws are invariably clean and free of contamination, so they can be processed for the “highest use” — bottles to bottles, aluminum cans to aluminum cans, she said.

CDL systems also transfer responsibility for recycling of beverage containers from municipalities to the producers of those containers — the bottling companies — thus saving taxpayers’ money she said.

A disadvantage from the point of view of the bottlers is the responsibility for handling the systems, Collins said.

But Previte has misgivings.

“It would be taking material out of the bin,” he said, referring to the recycling bins used in the current municipal systems.

That tends to devalue the many millions of dollars in both public and private investments in those systems, including trucks equipped for recycling, sorting and baling operations and materials recovery facilities, according to Previte.

Previte’s argument is a “red herring,” according to Collins.

The haulers who participate in the municipal programs likewise don’t mind being relieved of the responsibility for the beverage containers, even if they still must collect the other recyclables, Frederick said.

Another argument against CDLs is that they create a second, parallel system.

Two systems instead of one might seem to be less efficient, Frederick conceded.

But that too is a red herring, because the CDL system captures many of the containers that would otherwise go into the trash — including the 30 to 50 percent used and often thrown away outside households, she said.

That includes containers used in commercial buildings, industrial buildings, institutions, while people are “out and about,” and at recreational sites and events — all situations and venues that are outside the focus of the municipal systems, she said. “Without a deposit program, a vast majority (two-thirds) of containers are landfilled,” Collins said.

Burgmeier’s initial response to the plastics marketing problem — and the IRC’s reaction to it — were the impetus for Burgmeier’s visit to the board.

It started with a letter he sent to customers in mid-January announcing the company’s intention to impose a “recycling fee.

“Recycling is necessary and environmentally responsible, but the cost must be covered by the consumers,” the letter stated. “Until this point, Burgmeier Hauling has absorbed the cost of recycling, but we can no longer do so.”

To come into compliance, the firm will simply fold the $2-per-month surcharge into its regular bills, said company controller Steve Kasun.