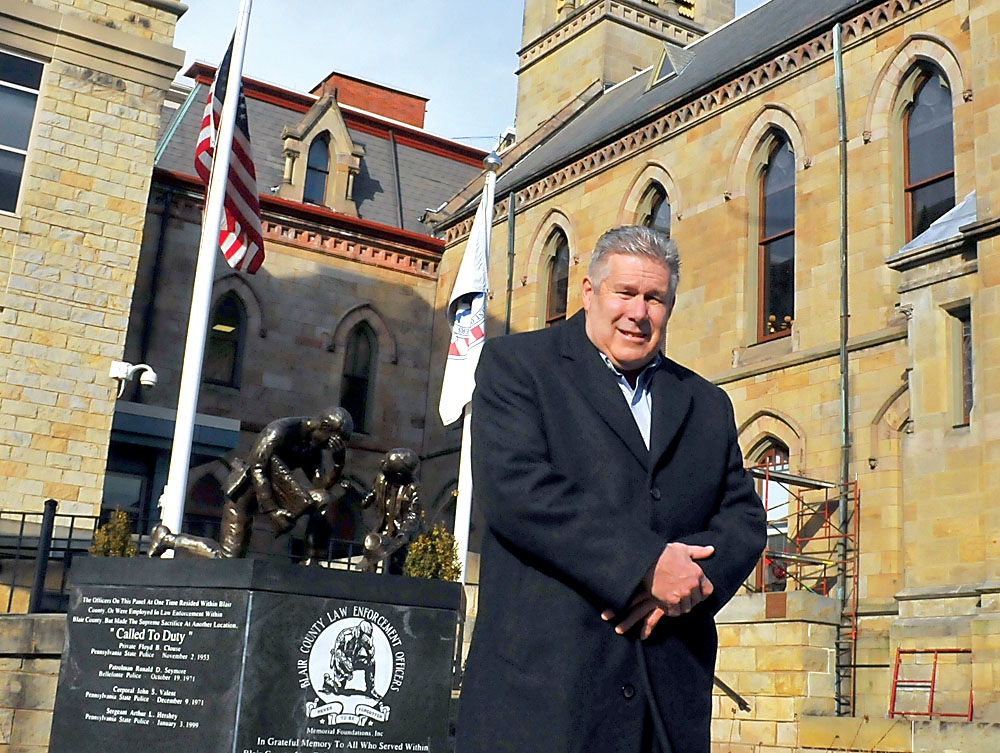 Norman “Dusty” Young Jr. stands at the law enforcement memorial outside the Blair County Courthouse. Young spent nearly 40 years in law enforcement positions throughout the area, starting at the Altoona Police Department and retiring Jan. 8 as a county detective for the District Attorney’s Office. Mirror photo by Greg Bock

In his nearly 40-year career in law enforcement, Norman “Dusty” Young Jr., who retired Jan. 8, was never one to seek attention, but the impact he’s had on stemming the flow of drugs into the area is almost immeasurable.

“If there was a hall of fame of law enforcement in Blair County, he’d be first on the ballot,” said Randy Feathers, who worked with Young at the Altoona Police Department, then the Attorney General’s Bureau of Narcotics Investigation and finally at the Blair County District Attorney’s Office, where they both served as county detectives.

Young said after 25 years at APD and then eight years with the Attorney General’s Office, he was happy to take on a new role for the past five years with the DA’s office. He said that allowed him to step back from the 24-hour-a-day, seven-days-a-week nature of drug investigations and yet still work in law enforcement. He said throughout all the years, his wife, Sandy, whom he married in 1977, has remained loyal to him and supported him in his work and its unconventional hours. He said now, in retirement, he’s looking forward to spending time visiting with his five grandchildren.

For Blair County’s law enforcement community, Young’s been a fixture for nearly four decades, and his work in narcotics laid the groundwork for the current way police go after drug dealers.

During his 25 years with the Altoona police, Young worked his way up from a patrolman to the rank of sergeant and the head of the department’s narcotics unit. While there, Young is credited with working with agents from the Attorney General’s Office to set in motion what has become the Blair County Drug Task Force, Feathers pointed out.

Feathers said Young really understood the drug culture and addiction and developed a reputation for how he treated the people he came into contact with on the job.

“He treated everyone fair,” Feathers said. “He was respected by good and bad guys alike.”

Young said he will run into people, and although he doesn’t recognize them, they’ll stop him and tell him, “Thanks, you’ve got me straightened out.” Young said others he’s dealt with over the years never did turn away from drugs, but even those people will still walk up to him and say, “Hi.”

“I think I can look back and say I treated everyone fairly,” Young said.

Drugs continue to be the area’s biggest problem, he said, even if the substances of choice have changed over the years. First, it was crack cocaine, then heroin and pills. Bath salts showed up for a while and now meth is prevalent, along with drugs such as Suboxone that were meant to help opioid addicts, he said. Even with all the money and manpower put into investigations and arrests, only one thing will truly stop drugs in any community.

“We’re going to continue to have a problem with drugs unless we curb the appetite,” Young said.

Young said he wanted to become a police officer because it seemed like an interesting field of work. “You’re out on the street,” he said, noting he tried to get a job with Altoona police straight out of college before he served three years in the Army. Following his service, he worked at the Altoona Hospital for a year before he was hired by the Altoona Police Department, along with his former Bishop Guilfoyle classmate, former Blair County Sheriff Mitch Cooper.

“I can’t say enough good things about him,” Cooper said. “He was a dedicated officer. He had a great positive impact with his narcotics work with APD and later with the AG and drug task force.”

Cooper credited Young’s work with stanching the flood of drugs and violence that has plagued other cities.

“He didn’t want to be in the limelight, he just wanted to get the job done,” Cooper said. “He’s going to be sorely missed, and he’s had a great impact on our community.”

Cooper pointed out Young treated people well and in turn that allowed him to develop the relationships with people that provided police with the information and evidence needed to prosecute drug cases successfully.

Cooper, along with Feathers, worked with Young on one of the cases of which he is most proud — the convictions of heroin trafficker Efrain G. Hidalgo and his two top associates in 2000 that led to what was then the longest drug sentence in Blair County’s history, one of 60 to 150 years.

“The sad thing about that organization is half the people involved are dead,” Young said. Another large case that stands out in his mind was that of convicted cocaine trafficker Brian Pfister, sentenced to seven to 14 years in prison in 2012.

But the big cases were the exception, Young said, with most of the work involving users.

“By and large, 90 percent of arrests are addicts,” Young said. “That’s the way it’s always been.”

That is why the large cases involving people coming into Blair County to prey on addicts were the ones that were the most rewarding. To get to the dealers, police have to work with confidential informants, which Young said comes with challenges.

“You have to trust them, but they’re so untrustworthy,” he said of the informants.

Young said Blair County’s drug task force has experienced success because everyone has worked together and because of the community’s support through Operation Our Town and the willingness of ordinary people to speak up when they see drug activity.

Blair County Judge Jackie Bernard, who worked with Young when she was a prosecutor in the DA’s office, pointed out that Young had “boundless energy” and a work ethic that was the same whether the case was big or small. Judge Bernard, who prosecuted the Hidalgo case, recalled Young’s ability to see the big picture when it came to investigating cases.

“He never stopped working, even after the charges were filed,” she said, noting that he worked on cases up through trial and conviction.

Weeks said where Young shined was in his ability to find witnesses for a case, sometimes after some time had passed.

“He could find anybody in Blair County or elsewhere,” Weeks said. Sometimes, those witness weren’t all that willing to be involved in a case and Young was able to talk with them and persuade them to help.

“He was just one of those guys who could develop a repertoire with a person in a short amount of time,” Weeks said.

“He has a wide, wide range of knowledge,” Consiglio said.

Consiglio said whether it was when he was a patrolman and detective with the Altoona police, or a narcotics agent with the Attorney General’s Office or while working in his office as a detective, Young worked hard on cases from start to finish.

Consiglio pointed out Young is also a laid-back guy who never sought attention.

“He’s one of the nicest guys you’ll ever run into,” he said.

Judge Wade Kagarise, who also worked with Young while a prosecutor in the DA’s Office, said Young was dedicated to the job and echoed Bernard’s sentiments on his work ethic with each case.

“Not only on the law enforcement side of things — the working on the investigations — but when the charges were filed, he would work with the prosecutors, preparing the case for trial,” Kagarise said. “He had a real skill for narcotics cases. He was one of the best narcotics agents I’ve ever worked with.”