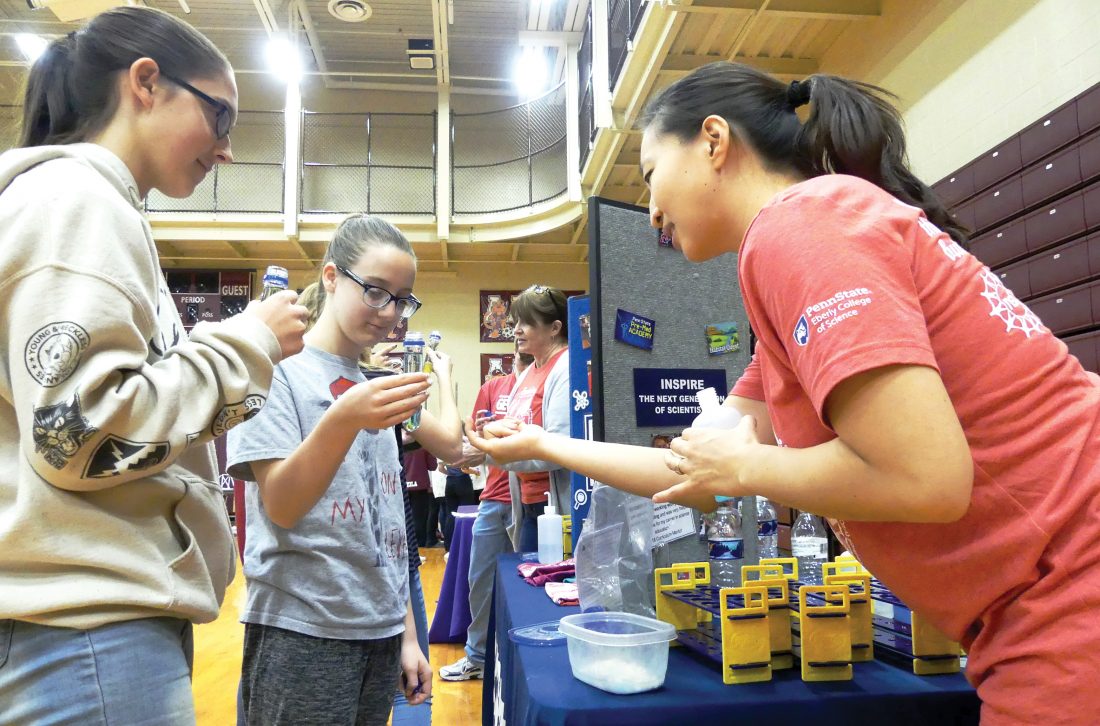 Altoona Area School District brought dozens of female professionals to speak solely with young girls Friday as a way of changing their minds about traditional male and female career paths.

Although more women are beginning to enter occupations including engineering and other jobs in the science, technology, engineering and math (STEM) category, females continue to be under-represented in those fields.

Altoona Area held its second annual “Girls STEM Day” on Friday to show girls what they can do.

Petroleum engineer Denise Delozier of Altoona was keynote speaker in the Altoona Area Junior High School auditorium. She went through adversity early in her college career after graduating from Altoona high.

“My second year of college in 1979, my professor said, ‘Women shouldn’t be engineers. You may be in the class, but do not disturb the male students,’ the professor said,” Delozier recalled.

But she became a successful petroleum engineer working from home in Altoona for the world’s largest international oilfield services company, Schlumberger.

“Our message today is that all girls can do it, and they should know they have options,” Delozier said.

About 40 local female professionals gave the girls a glimpses of a variety of activities and experiences in STEM-related disciplines.

WTAJ meteorologist Christy Shields knew she wanted to be a meteorologist from a young age. But there was a something she noticed about that job.

“The only role models were males,” she said. That’s why she was happy to participate in Altoona Area’s girls STEM day.

“I was really excited to come today. I hope the girls get excited about science.”

Engineer Amy Tomasko represented Albemarle Corp. in Tyrone, a chemical company that makes products for all kinds of industries. She said she was glad to have the chance to explain to the girls that engineering is “more than just math,” she said.

Assistant Superintendent Brad Hatch said it was awesome to have so many participants including three generations from the same family, all who went to Altoona Area.

“Computer science, engineering, biomedical, that’s where the jobs will be,” he said. “It’s important to expose girls to those things now for their class scheduling and internship opportunities.”